The Vintage Store Bringing Magic to Kings Cross After Dark

Grand Days, a treasure-trove of books and clothes on William Street, has launched a series of after-hours events celebrating music, fashion and film. In partnership with City of Sydney, we step into their colourful, nostalgic world. 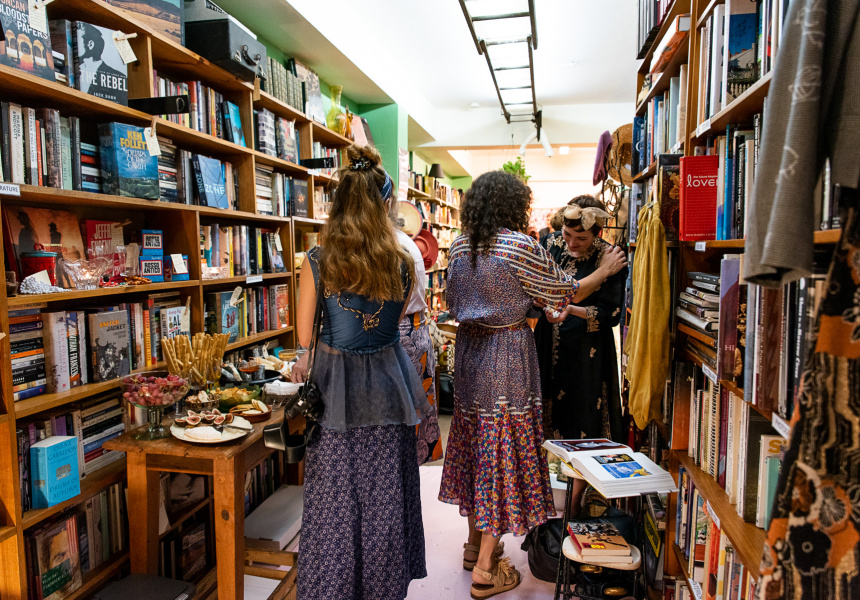 If you can imagine the contents of a time capsule spanning decades – piles of disco records, wind-up toys, glittering high heels, grunge cassettes, biographies of silent film stars and punk fashion icons – then that’s pretty much what the front window of Grand Days looks like.

The books, records and collectables store on William Street is a little shop with a lot of style. It’s a vintage treasure-trove, bursting with crates of vinyl, shelves of rare and classic books, and rows of retro clothes and accessories.

The emporium is owned by Tom Hespe and Tamara Kennedy, who bought the business in 2013. Hespe regularly walked past the store – then known as Bugden’s Bookshop – while running errands. “Being a vinyl hoarder, I‘d go out to the record room out the back,” he says. “One day I came in and there was a sign on the door saying the business was for sale.”

He went home and presented Kennedy, his partner, with the crazy proposition to buy the bookshop. “We were both at the stage in our lives where we were looking for a new challenge,” he says. “We saw the potential of the space because of its proximity to Kings Cross – it’s an eclectic area.”

They ignored the doubters who told them “books were going to die” and took the plunge, becoming the proprietors of one of the suburb’s most idiosyncratic stores. They set about expanding the record range and adding vintage clothes. “That’s been really successful,” says Hespe. “Tamara has a great eye.”

They gave their store a suitably evocative literary name, Grand Days, the title of a book by Frank Moorhouse whose central character is Edith Campbell Berry, “a great Australian heroine”, according to Hespe. “She’s a really interesting character, and that really appealed to us,” he says. Like Edith, they wanted to be bold, with the aim of “not just selling books but making the bookshop an experience”.

They recently received a City of Sydney grant to run a series of after-hours events throughout 2019, dubbed Grand Nights. The line-up includes a flamenco duo – acclaimed singer Antonio Soria and guitarist Jeremy Lloyd – who appeared at the first Grand Nights event in January, and Leah Flanagan, an ARIA-nominated singer-songwriter set to take the stage in February.

“We’ve seen the night-time economy change quite a lot in Sydney,” says Hespe. “I’m a musician and I love seeing gigs. It seemed like a great opportunity to use this space to offer something in the local area which is different and culturally interesting, both supporting artists and the community.”

The store has a different feeling in the evening, says Kennedy. “It’s a little bit magical in here at night. We turn the lights down and we have candles. It’s quite beautiful to spend time in here after dark,” she says.

It’s an area with a diverse demographic. “It’s a mix of people who are living in Woolloomooloo in housing commission and people who live on Macleay Street in beautiful apartments, and everyone in between,” says Kennedy. The Grand Days clientele is just as eclectic: local workers try on clothes on their lunchbreak, kids drop in after school to flick through the vinyl, and young professionals stop by to browse on the way home from work.

“The Kings Cross Market on Saturday is really great – there’s beautiful food and a big flower seller there,” she says, “The vibe is great.”

“It shows that there’s more to the Cross than going out at night-time. There’s a network of people who try really hard to keep the businesses going and promote this area.”

The next Grand Nights event will take place on Thursday April 11. The event is free, but reservations are required