For the past year, Andrew Quilty has split his time between Sydney and Kabul, Afghanistan. Quilty tells Broadsheet about his life in the Middle East, and walking the perilous line between violence and harmony in his work. Flocks of pigeons are a common sight in the skies over cities across Afghanistan in the cooler months. Their keepers fly their flocks in circles above their roofs and attempt to confuse pigeons from other flocks into falling into their own at which point it becomes the property of its new master. For some men, a living is made by selling captured pigeons back to their original owners. Pigeons take to the sky outside Shah e-Doh Shamshira Mosque in Kabul. 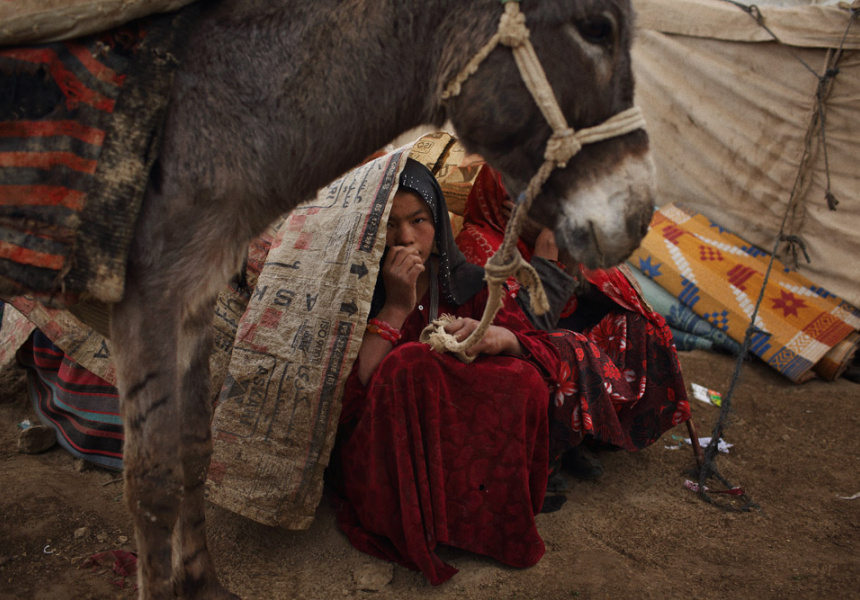 Two days after two landslides buried more than 500 residents of Abi Barik in the Argo district of the mountainous northeastern state of Badakhshan under hundreds of feet of mud. The first landslide buried some 300 homes and those who had been inside or on the streets at the time as well as those attending a wedding party. The second landslide struck as villagers attempted to rescue those trapped - digging with shovels and their bare hands. A young girl shelters from the rain beneath discarded plastic packaging.

In 2006, violence flared in East Timor, and Australian troops were sent to intervene. Every day back then I poured over each photograph in the Sydney Morning Herald, studying the names, trying to imagine being in the photographers’ shoes. There was something fascinating about the photos coming out of East Timor. Brendan Esposito’s images were exhilarating. Flashes of violence, sweaty, shirtless men brandishing machetes, grass huts with flames pouring out their windows. They were real. It was real.

There’s no doubt that there’s something captivating about conflict for a photographer. Equally as appealing to me is its antithesis – harmony. While harmony comes in many forms, it’s most visceral when observed in the context of conflict.

I’d toyed with the idea of taking myself off to East Timor but came to the conclusion I had no reason to go. Photographing “bang bang” – as it’s known in the business – had never been an aspiration of mine. Or maybe I just didn’t have the balls. I didn’t know much about the history or the politics surrounding the conflict, either. Had I gone then, I’d have been doing it because it was what I thought my peers expected of me. One of my mentors in life, Dean Sewell, once passed on an adage from a photographer he’d looked up to, Jeff Carter: “There are only two types of photographer: Those who draw attention to their subject, and those who draw attention to themselves.”

In 2013 a colleague I’d worked with at The Australian Financial Review, Claire Stewart, asked if I knew of any photographers working in the Middle East. She was planning a trip and wanted to team up with a shooter to do some stories. Without really even thinking about it, I said, “I’ll go!”

Her question had come at a time when I’d been transfixed by what was happening in the region. I was tired of the trivial world of Australian politics and its affairs while these life-and-death struggles were playing out across a region that had always sounded so exotic, so intimidating to me. I felt ready. I was curious. I was hungry to explore these places and the stories within.

We’d originally planned to spend two weeks in Afghanistan. Get in and get the hell out! My palms were sweaty as our plane approached Kabul International Airport. I was expecting to get blown out of the sky before we even landed. Ten weeks later we left Afghanistan. My heart was heavy.

I’ve flown in and out of Kabul airport several times since then and I still look forward to coming back. I rent a room here in a share house with a beautiful green garden with roses and sunflowers taller than me. We’ve got two dogs that were taken from the street when they were puppies and a couple of cats that I could do without. The windows are coated with a blast-proof film coating. There are a couple of places to get a coffee – each with security measures including armed guards, metal detectors, blast walls and compartmentalised entrances whereby two or three separate doors need to be unbolted and opened before you’re inside. At times, it seems overkill. Often you’ll see a couple of burly blokes eating their huevos rancheros in bullet-proof vests. I remember scoffing at such a scene a few nights before a restaurant we’d eaten at the previous night was attacked. Twenty-one people were killed at La Taverna du Liban, most executed by gunmen after another had blown himself, guards and the security gates up with a suicide vest. I was rattled, and like most of the ex-pat community, laid low for a few days, reading a book that was bookmarked with a voucher from Taverna and waiting for another boom off in the distance.

Eventually I forced myself out of the house one morning and walked, without a destination in mind, hoping to come across something that would lift me out of the funk and bring me back to where I was before Taverna. Before long I found myself in the shadow of a hill. I’d climbed to the top before dawn a handful of times prior to photograph men training fighting dogs. I’d stopped at a corner, photographing men and women hurrying in and out of fruit stands and a butcher with a whole cow carcass hanging up out the front. Soon I was invited inside one of the hole-in-the-wall spaces. I sat by the door in a small room. There was no furniture save a bench along the back wall. A man of maybe 40 sat with the stump of his amputated leg poking off the edge. He and two friends drank tea from a tin pot. Another rolled a cigarette before crumbling little bits from a fingernail-sized wad of hash along its length, an extra cup of cardamom- scented tea was poured and passed to me.

Conflict and peace – they’re never far apart here. As I write from a hammock in our garden, two menacing Black Hawk helicopters fly overhead in tandem. Access to subjects is fraught with difficulties. While Kabul itself is relatively safe in comparison to the outlying provinces, it’s hemmed in by provinces that aren’t at all safe to drive into. Once you’ve flown to where you need to be you can’t just hire a car and follow Google Maps. You need a fixer or guide and a driver – people who know who to talk to and where or where not to go.

I was commissioned to photograph the aftermath of a landslide that buried 300 homes and more than 500 residents from a rural village in the northern province of Badakhshan. Getting there involved – with the help of my fixer Masur – smuggling myself on to a plane that was carrying the Afghan Vice President. I understand why some say that photographing people in such circumstances is exploitative. I’ve watched plenty of photographers working in an exploitative manner. “Enjoy” would be the wrong word, but I do relish being in such environments. If I’m not there, I’m anxious.

I suppose it’s the presence of empathy in a photograph that distinguishes it from being exploitative. But still, it’s easy to underestimate what people are going through, even in situations such as the one I was witnessing. There’s a stoicism that pervades the Afghans and it’s born from the cycle of conflict and harmony through which every living Afghan has existed.

I’ve heard that a lot of people who have spent extended periods in places such as Afghanistan become angry and anti-social. I’d heard otherwise as well, but I’ve discovered that not everyone’s experience here is the same. Most soldiers, for example, will tell you Afghanistan is a hell hole they never want to see again. A security contractor told me he’d never walk the streets in Afghanistan without a firearm. What you come away with from a place like this depends entirely on the perspective from which you view it and the role you’re there to play.

As a photographer, whose duty it is to be curious, and as a human who has learnt that not everyone is out to kill me, Afghanistan has gotten under my skin.