An offbeat arts biennial sets up shop on Cockatoo Island. 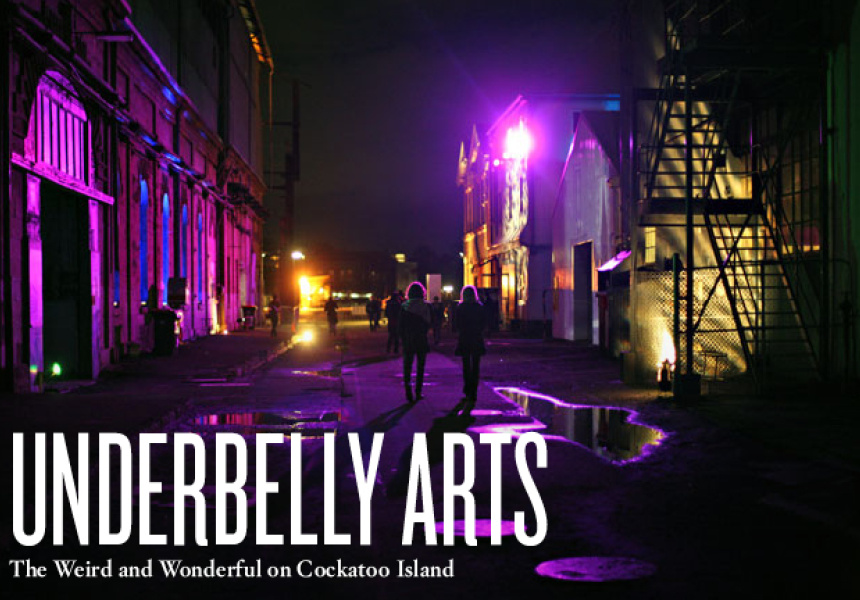 This weekend and next, over 100 artists will converge on Cockatoo Island for the biennial Underbelly Arts festival. Here, they will take part in over 29 unique projects spanning multiple disciplines and mediums including performance, installation and digital technology. They’ll also explore a wide range of themes, such as surveillance and intimacy and even some of the darker histories of the island itself. [fold]

Launched in 2007 as a response to the growing number of artists working out of their garages and bedrooms, the Underbelly Arts Festival has become a creative project in and of itself. Operating as an immersive, interactive exhibition and – to use their own term – a kind of “social experiment”, the event brings together artists from a huge range of practices all under the one roof to present their work to a broader audience.

While starting as an annual event, the decision to go biennial was, says Underbelly’s artistic director Eliza Sarlos, a way of not only guaranteeing the highest quality of work but also the best spaces to exhibit. “We made the decision after the 2011 festival,” says Sarlos. “We were just overwhelmed by the success of that year’s response. We wanted to ensure we could continue to deliver a high standard to artists and audiences and develop new ways of working with artists outside of the festival. Looking back, it was the right decision – this year's festival is set to be incredible and we've developed a whole range of ways to help do what we do best and work with Australia's next great artists.”

This year, the festival has been split into two components: The Lab, which is a free, eight-day mini-residency that runs during the last week of July, in which visitors are welcome to go watch and talk to the artists as they work and learn firsthand what the work is about; and the festival proper, which runs over the first weekend of August, taking place across the entire island.

While the festival has no particular theme other than a certain level of engagement with the site of display, more artists than ever are exploring the role of technology and digital culture within their work. Two such pieces are Chris Rodley and Andrew Burrell’s collaboration called Everything Is Going to be OK :), which uses live Twitter feeds to construct and depict the most intimate conversations.

Anyone interested in the history of Cockatoo Island should make the time to experience Ghosts of Biloela. A creative non-fiction piece, Ghosts of Biloela works through your smartphone as a digital narrative that tells the story of the girls who were once sent to the island to attend the infamous reform school. Described as a ‘hell on earth’, this is an interactive ghost story where you get to take part in the hatching of an escape plan, the story developing with every choice you make.

And for people attending the interactive Lab, Warren Armstrong’s Forms of Thought has designed a way to literally map your thoughts. Using the power of your mind, local environmental sensors and weather feeds, Forms of Thought generates 3D take-home models of your mind so you can observe the inner workings of your brain in physical form.

Underbelly Arts runs from August 3 to 4 on Cockatoo Island, The Lab runs from July 24 to 31.