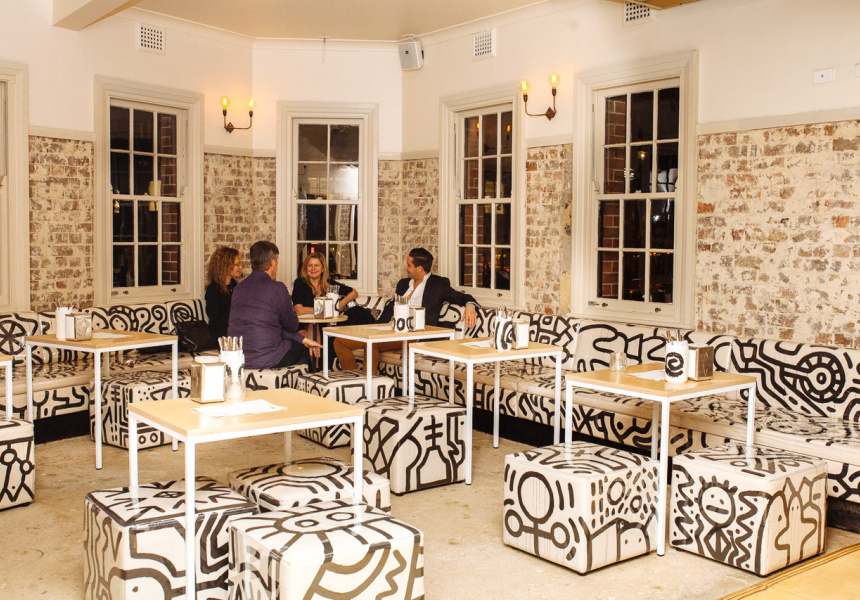 The annual Eat Drink Design Awards are dedicated to recognising the best in hospitality design in Australia and New Zealand over the past year.

At a ceremony in Melbourne on Tuesday night, Sydney venues took home three of the major awards.

Some walls are bare. Others are clad in wrinkled fabric, a technique inspired by Bulgarian artist Christo. Upstairs couches in a black-and-white graffiti-style print by artist-in-residence Beni Single are wrapped in plastic. And highlights by installation artist Tracey Deep abound. It’s a look you won’t soon forget.

Design firm Woods Bagot’s fit-out for Campos Barangaroo won the Best Retail Design category. Judges described it as: “a glittering ‘jewellery box’ installation, positioned and at home exactly where it should be.”

Fratelli Paradiso was inducted into the Hall of Fame; it was designed by Mike Murphy with later additions by Mike Hanna and Don Cameron. The jury writes: “Where does one begin with Fratelli Paradiso? Established in 2001 in what was then a distinctly un-gentrified and rather seedy Potts Point, this institution sees so many key ingredients come together to give it its continuing and seemingly never-ending moment in the sun.”

Of the interiors, judges said a lot of dining rooms in Sydney have views but: “Fratelli Paradiso is something else entirely – an introverted stage where diners view and interact with wait staff and each other. Built around this ethos, the interior, designed by the late Mike Murphy, is very dark. ‘We used to have complaints in the old days, but now the iPhone torches come out,’ co-owner Giovanni Paradiso says.

“It is a utilitarian environment, a workplace that has to function first and look good second. This posed challenges, given the U-shaped nature of the shopfront and the need to create a working space on one side, where the baking and pasta-making happens, that would still be comfortable for diners to occupy.”