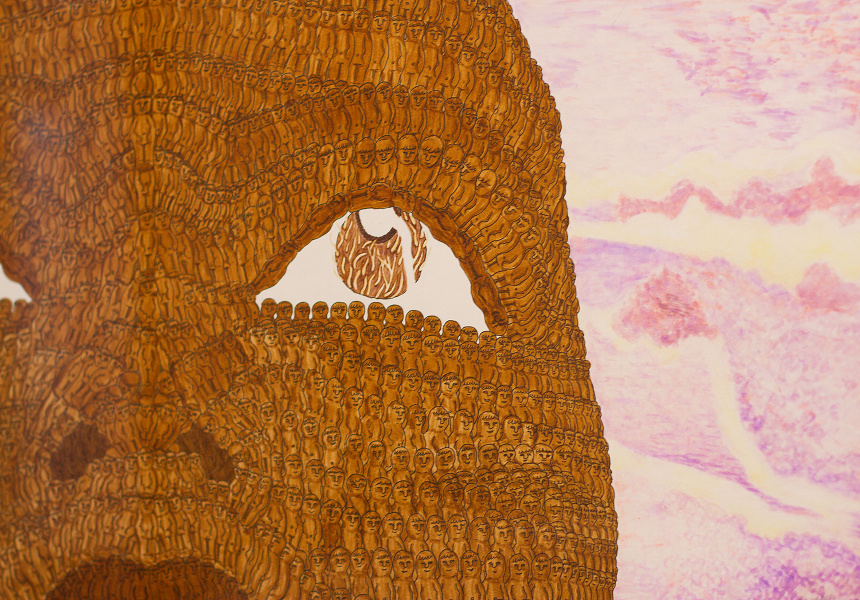 With a whimsical pseudonym and superhero alter ego, TextaQueen is one of Sydney gallery Sullivan+Strumpf’s most strikingly individual illustration and performance artists. TextaQueen’s medium of choice is a rainbow of coloured felt-tip markers. The artist’s illustrations are symbolic, playful and political. Usually clad in a fire-engine-red playsuit and utility belt fashioned out of a row of Connector Pens, TextaQueen integrates performance into artworks through this friendly superhero guise. The artist – who prefers to be referred to in only gender-neutral terms – has exhibited both nationally and internationally, and this month returns to Sullivan+Strumpf for a new collection entitled Coconut Legacy.

On the morning of the opening of TextaQueen’s fifth solo exhibition at the Zetland gallery, the artist has left the superhero getup behind. The artist explains that TextaQueen was initially created as a way of controlling audience perception. “It’s so easy for people to patronise me as a cute brown girl. And it was a way of choosing how I was presenting myself – in a humorous way, in a cute way, as a superhero. People are going to do that anyway, so why not be a superhero?”

Now based in Oakland, California, TextaQueen grew up and studied in Perth, and has lived in Sydney and Melbourne. For the Goan Indian-Australian artist, ideas around heritage and cultural estrangement are interwoven in each work. Coconut Legacy is a series of marker-made illustrations in vivid colour that tell the fictional life story of TextaQueen from birth to death. “It’s supposed to [question] what it means to have a cultural heritage when you’re raised so far from that land and the culture of your ancestors,” the artist says. “It’s kind of a metaphor for my life. And I’m projecting, because I’ve never been pregnant and I’m not dead.”

The Coconut Legacy story begins with TextaQueen’s conception inside a coconut. TextaQueen’s work is boldly symbolic, using fantasy to reveal social and political truths. Throughout the series, the artist and the artist’s ancestors are referenced interchangeably via a chocolate-flavoured Allen’s Chico gummy sweet. “It’s such a problematic little gummy, but it was such a fascinating thing as a child,” the artist says of the Australian-made lolly that has been labeled politically incorrect and racist.

From the coconut, TextaQueen is pushed and pulled into what the artist describes as, “the cogs of assimilation.” Peppered between the grey-coloured clogs are symbols of Australianism, male and female, time and religion – the cultural landscape TextaQueen was born into. In Portal, bright-yellow marker lines bleed into orange, red and then dark purple. “The ghostly part in the middle represents my ancestors looking out over me, through time and space no matter what,” says TextaQueen.

In a piece entitled Relative, TextaQueen is shown in a spacesuit, moving through a galaxy thick with glowing stars. This image represents personal resistance against the strict medical characterisation of mental health. “This was in response to someone saying I was “spacey”, and using it as an excuse to rip me off and not tell me things that they should have,” TextaQueen says. “I feel I am connected to the cosmos. I think that a lot of people with mental illness, or people classified as having mental illness, are just more connected to the cosmos.”

TextaQueen has a new residency planned in Eltham in Victoria, as well as a Drop-by Drawing workshop at the National Gallery of Victoria next month. TextaQueen’s workshops are for children, teenagers and adults and incorporate performative spectacles.

Coconut Legacy is open now until September 6 at Sullivan + Strumpf.