Tame Impala: From Way Out West

Playing to sell-out crowds in New York, London and Buenos Aires is all in a day’s work for Tame Impala, but it’s the Australian response to Lonerism, the band’s sophomore album and Triple J Album of the year, that they’re most impressed about. We caught up with Dominic Simper, on the eve of their show in Sydney this weekend. 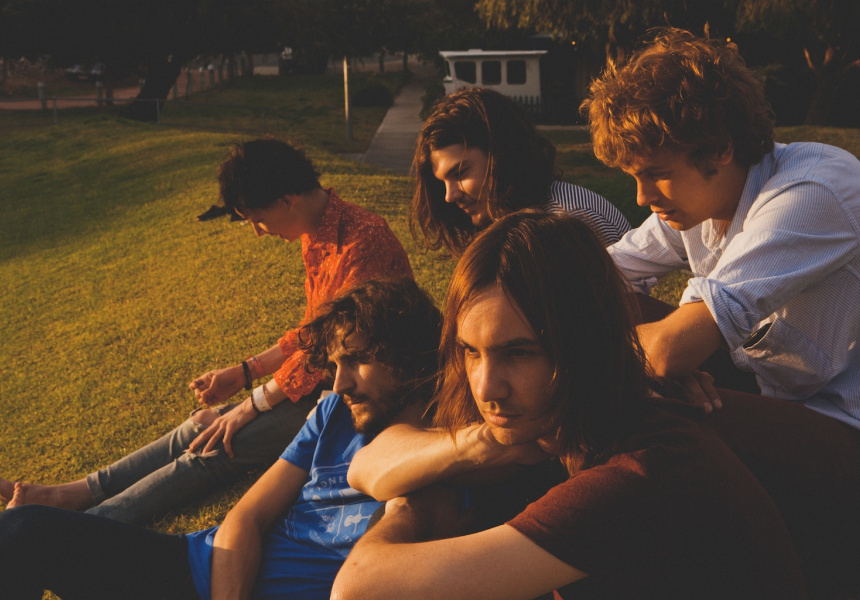 When you look at the evolution of popular music in Australia over a long enough period, you can almost see the scars: the monumental shifts, the forming of genres and their immediate dispersion when someone breaks new ground.

Everyone is reliant upon Triple J, the only national radio station with the scope to unearth emerging artists. But that too has its problems, often creating a disconnect between Australian music and music from the rest of the world. It’s bands like Tame Impala that manage to hold their own on the world stage.

“The response everywhere has been pretty overwhelming, to be honest,” says Dominic Simper over the phone from his home in Perth. Simper played guitar during the band’s formative years, but is now more often seen on the synthesizer when they play live.[fold]

Between tours, Simper lives at his parent’s house in Fremantle, not far from the band’s keyboard player, Jay Watson. It’s been hard for him to find anything like a normal home life with such a demanding international tour schedule. “I used to live with a bunch of musicians in Fremantle, but I got sick of seeing money fly out of my bank balance when I was on the other side of the world,” he says. “So I’ve packed all my shit into cardboard boxes at my parents house and I just crash here when I’m in town.”

Simper met Kevin Parker, the founder and leading man of Tame Impala – who writes, records and produces the bulk of the music himself – at high school and they’ve remained close friends ever since. Simper says it’s pretty unique playing in a successful band with such close friends, because there’s added complications when entering into creative and business arrangements. “There has been some funny moments in the past, but we’re all comfortable in our places now,” says Simper. “There are no battered egos anymore…we all want the same thing, for the songs to sound amazing. The five of us are closer than ever before.”

Nowadays, the recording process is much more refined. Parker goes into isolation for a period and only reappears when the album is complete. “The recording side is very much Kevin. He locks himself in a room and comes out two years later with an album,” says Simper, quite comfortable in his place. “The job of the four of us is bringing it to life live.” Tame Impala relies on trust and, according to Simper, they have learnt not to be too precious when it comes to arranging the songs live.

Tame Impala have had great success both onshore and abroad. They seem to have crossed that impossible gap into the world market, breaking ground in New York and London. Lonerism has been well received in New York particularly, and not only with Australian expats. “It’s crazy man,” says Simper, still a little bemused. “I try not to think about it too much. It’s such a cool city. We actually played in Brooklyn about a month ago and it was bucketing down with snow.”

When talking to Simper, you get the sense that the entire band is surprised to be on the wave they’re on. There’s no doubting that they’re one of Australia’s most prodigious talents, but they’re also very reserved when it comes to fame. “It’s not something we really strive for; it’s not really our job,” says Simper. “We try not to concern ourselves with it and just try and concentrate on the music.”

It’s part of their understated ethos, which sees them always looking to Australian audiences as the real test of their progress. “It’s been so long since we’ve done our own shows in Australia,” he says. “It’s going to be really interesting to see how the shows go over here.”

Tame Impala are playing at the Enmore Theatre this Friday December 14. For their Lonerism tour dates, visit the band’s website.