Tactile Elegance at The Fortynine 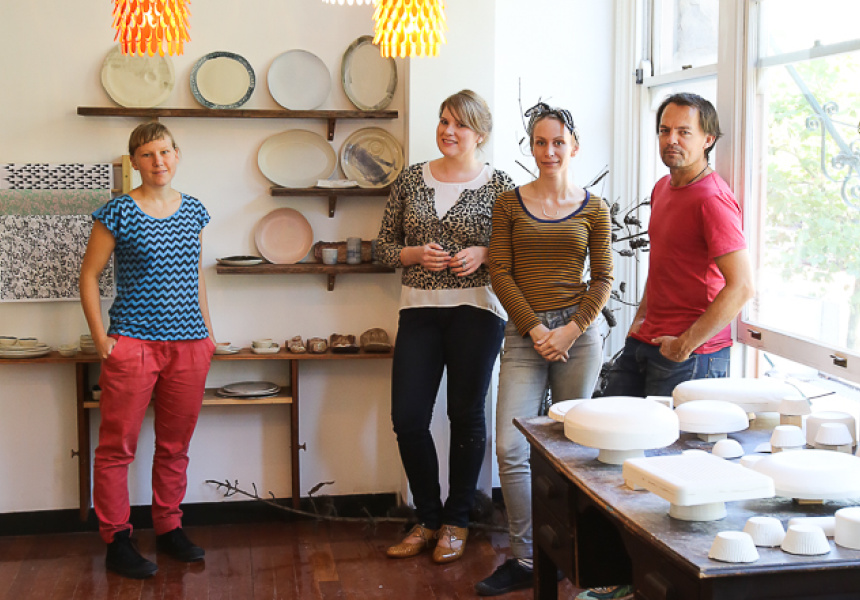 Sometimes, throwing yourself in the deep end is the only way to find out if you’ve got what it takes. For The Fortynine Studio, a Darlinghurst design collective comprising six friends who met at Sydney’s College of Fine Arts, this came in the form of a chance commission – a collection of handmade ceramics to be featured in Bill Granger’s new cookbook, Easy.

“We’d all already started our commercial careers and we had worked together on a few ceramics projects earlier on,” says Lauren Austin, whose background is in graphic and object design. “One of our lecturers contacted us to ask if we were interested in an opportunity to produce a range of ceramic tableware via Bill Granger’s stylist, who was based in New York. We had a six-week turnaround on the project; we produced the work here and they ended up using almost all of it.”

The collaboration doesn’t come as a surprise. Each piece in the Flip Flop Slip range is tactile, elegant and highly functional, the result of a considered process in which white raku clay is moulded by hand before being thrown on the wheel.

“We were experimenting as we went along, but it was so rewarding to produce that calibre of work in that kind of a timeframe,” offers Austin.

She says that Flip Flop Slip has been the catalyst for a host of different opportunities. “We’ve made connections with Australian Gourmet Traveller and a lot of stylists have photographed our ceramics for other cookbooks. We’ve had people commission our work from London and Dubai and had a great network come about from this project. It’s really helped us propel.”

This is admirable, given that ceramics is only one element of The Fortynine Studio’s creative reach. The design collective has hosted public programs for Sydney Design Festival, installed the Light Shed – a cocoon-inspired viewing platform in Melbourne’s Federation Square – and created Banksia Lights, an Art Month initiative that doubled as a visual meditation on the Banksia flower.

For Austin, the success of Banksia Lights is proof of what’s possible when you re-imagine Sydney’s spaces and works to illustrate the city’s creative awakening. “No one was expecting to fill the space up with three hundred trees, but that’s exactly what we did. When the audience came in, they were amazed about how we’d transformed the space. I think there’s so much going on in Sydney right now and the city is well on its way to being truly exciting.”

Austin credits The Fortynine’s evolution to the multidisciplinary nature of its members as well as design ethos that stems from collaboration and conversation.

“Ben Elbourne is horticulturalist by trade, but he also studied lighting design and furniture design and teaches in ceramics. Sarah Spackman’s background is in textiles and jewellery design, but she works in ceramics as well. Harriet Watts’ practice is in textile design and Carly Vickers is a graphic designer. We wouldn’t be where we are now without each other’s skills. One person just doesn’t have the time to master all of those things,” she says.

Although, the collective still work day jobs to support their practice, Austin hopes this will change in the near future.

“At the moment, The Fortynine is our part-time love although it’s also our 2am love and our weekend love. We hope that one day it will be our full-time love.”

This day may be closer than she thinks.