Including 52 photographic exhibitions lining 600 metres of Bondi Beach’s promenade, and a series of “holiday” snaps shot during Melbourne’s lengthy lockdown. Kadri Elcoat's Postcards From the Edge (of South Melbourne) At first glance, Kadri Elcoat’s photo Surfin’ Safari looks like any other fun holiday snap – albeit an impressive one: in it, she’s surfing like a pro. It’s only when you look closer that you realise all is not as it seems – waves don’t tend to be that shade of Pixar blue, and her surfboard bears a suspicious resemblance to an ironing board. If it looks a bit like she’s surfing in her backyard, that’s because she is.

The photo forms part of Elcoat’s series Postcards from the Edge (of South Melbourne), an irreverent series of “holiday” snaps shot completely within the confines of her home during Melbourne’s record-breaking lockdown, which will be displayed as part of the free annual Head On photographic festival.

Now in its 12th year, this year’s festival is the largest yet, with 60 artists exhibiting photographs at two locations – Bondi Beach and Paddington Reservoir Gardens – in addition to a program of artists’ talks, workshops and digital events.

This is the first time Elcoat’s works have been included in Head On and, just like her series, there is more to the Melbourne photographer than meets the eye. By day she works in a high-pressure role as a solicitor in patent litigation. She finds an outlet through photography, an interest she’s cultivated since growing up in Auckland with her keen photographer father.

She began pursuing photography more actively after moving to Australia in 2011 and buying a DSLR in 2016. A course at the Photography Studies College in Melbourne two years ago led her to discover her own creative voice. When the students were asked to produce a folio in response to the Covid-19 lockdown, Elcoat wanted to explore mental health and her own reaction to the soul-destroying 100-day lockdown, but was determined not to make it too dark.

“There was no hope in the depths of that second lockdown and I thought, ‘I can’t do that to myself, I can’t go through a Melbourne winter in my house creating work that looks sad.’ So I decided to go in a completely different direction, embrace a love of colour and try to explore what we’d all lost instead,” she tells Broadsheet.

She restricted herself to things she had in her home. A proudly athletic and adventurous Kiwi – she is a former competitive figure skater, sailor and rock climber – she had plenty of equipment on hand. The resulting series is a humorous, whimsical, slightly melancholic story of life lost, and her almost manic determination to glean some enjoyment from her surrounds.

Postcards from the Edge opens with At the Copa, in which a swimsuit-clad Elcoat suns herself, cocktail in hand, on her kitchen floor. The caption reads: “Just checked into the Non-Coper Cabana.” Six Months in a Leaky Boat finds Elcoat in sodden waterproof clothing going “sailing” in her shower, gloved hands grasping at ropes tied off-camera.

“The shower was cold and if I posed in the wrong way I’d get a spray of cold water down my front, which was very unpleasant,” she says, laughing.

Elcoat shot the series using a camera controlled by a remote on her mobile phone, with a speed light on timer. Working full-time on a stressful legal matter, she only managed to shoot during weekends but was grateful for the outlet.

“Mental health is a big thing for me, I suffer from depression and anxiety so lockdown was quite a challenge living by myself, all my family in New Zealand and not being able to see the people you usually see,” she says. “But I found having something else to focus on, where you could dream a little and take yourself away from your current situation, was a profound learning experience for me in terms of understanding how to cope in difficult situations.”

A new exhibition of works by emerging Indigenous photographers will also be on display. It includes photos by artist, dancer and storyteller Lowell Hunter, who carves patterns in sand using his feet to create traditional dance steps he’s learnt, capturing the results with drone photography.

This year’s festival boasts more than 60 outdoor exhibitions, with 52 of those lining 600 metres of Bondi Beach’s promenade. Run by founder, lead curator, photojournalist and television producer-director Moshe Rosenzveig, Head On this year offers prize money of $70,000 for various awards that will be announced at the festival’s virtual launch on November 19.

Head On Photo Festival runs from November 19 to 28. 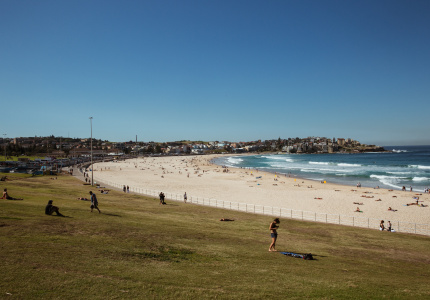