“I wanted to give strangers portraits of themselves, no strings attached,” says Cara O’Dowd. “The project has given me back so much more than I ever could have imagined.” 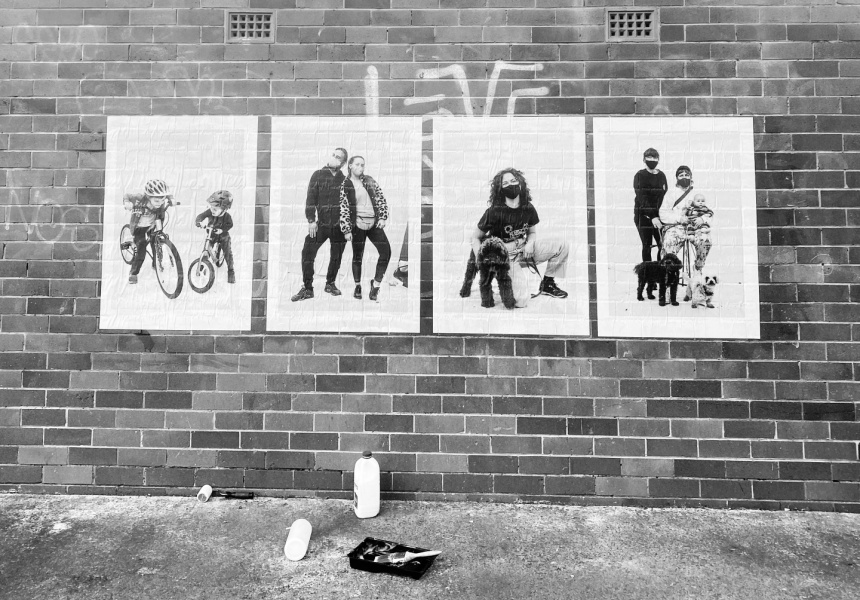 I first met Cara O’Dowd during a lockdown walk with a friend. She had a heavy white screen set up at the end of her driveway. If you were walking on the footpath, you couldn’t help but pass in front of it. She and her curly-haired three-year-old, Hazel, called out from the front garden, asking if we wanted a free portrait. When you’re only allowed outside for an hour a day, novelty should be seized. We agreed.

It occurred to me what a strange time we’re in when two toddlers can be close and offer each other comfort, but adults must stay a driveway’s length away.

Our portraits are part of O’Dowd’s Lockdown Locals photography installation that she’s shared on posters around our small inner west suburb. The project has changed a lot from the early days of lockdown when O’Dowd, a fashion photographer, found herself unable to work.

“The whole idea was to give people portraits of themselves,” she tells Broadsheet. “I wanted a way to keep shooting when I wasn’t allowed to leave my house. I would take their emails and numbers and send them the portrait that night, no strings attached. Then the rules changed and we had to keep our masks on. I thought no one would come anymore, but I got busier.”

As her collection of local portraits grew, O’Dowd decided to print them and poster the neighbourhood. Driving around the suburb, you’ll see her black-and-white photos on the sides of cafes, houses, the local dance studio, even on camper trailers. She always asks permission before putting up the posters, and the response has been overwhelmingly positive.

In a commercial world where creatives often have to fight for fair pay, it’s interesting that when O’Dowd lost her regular work, she decided to give it away for free.

“I attach a lot of self-worth to my work, being busy, achieving, having a camera in my hand,” she says. “I took a course called The Science of Well-Being during the last lockdown. I learned that when people earn more money, their level of happiness hardly increases at all. But acts of kindness for others make you measurably more happy.

“I didn’t intentionally do this to be happier. It was an act of giving, and a way to find my purpose when I couldn’t work, but I think subconsciously that course influenced me.”

O’Dowd has been a freelance photographer for seven years. She’s shot for fashion brands such as Shona Joy, Camilla and Marc, Myer and Industrie. But taking photos of her neighbours in front of her house has posed unexpected challenges.

“Normally my facial expressions get a lot out of people. Not being able to communicate that way is strange. But it’s fascinating what you can still see in the images. In one portrait of a brother and sister, she’s not masked because she’s younger, and she’s sticking her tongue out at him. He’s masked, but you can tell he’s laughing. So much is taken away, but you can still see what’s going on.”

O’Dowd’s subjects have returned her kindness in gifts and friendship.

“I’ve had Visa gift cards in my letter box, cupcakes, jars of jam, chocolate-dipped fruit. It’s given me more than I ever thought it would, and I don’t mean the presents. One woman told me she’s lived here for 35 years and it’s never felt more like a community than it does now.”

In a way, her little brick house has become the unintended heart of the neighbourhood. During our 30-minute interview, people call out greetings as they pass, or stop to chat. A woman comes with her baby and O’Dowd runs into the house to retrieve a rolled-up portrait. When asked if she wants a donation, O’Dowd refuses.

A pair of women in their 80s, one named Shirley, stop by the front gate. O’Dowd is ecstatic. She later explains that she tried to photograph Shirley on the weekend, but Shirley refused, saying she was too ugly. O’Dowd tasked the neighbourhood to find her.

“I’m so glad you stopped by; I’ve been thinking about you all week,” O’Dowd tells Shirley. “I think you’re beautiful and I would love to take your portrait. Please, please come back on Saturday at 5pm.” Shirley says she’s too old, but it’s clear she’s flattered that O’Dowd tracked her down. She agrees to return. “What should she wear?” her friend asks. “Whatever she wants,” O’Dowd says, smiling.

At a time when we’re divided by LGAs and five-kilometre borders, social distancing and masks, O’Dowd’s portraits ponder the paradox of lockdown.

We’re separated for who knows how long. But with her snapshots of connection, O’Dowd has managed to transcend physical distance and create a community from a driveway’s length away.