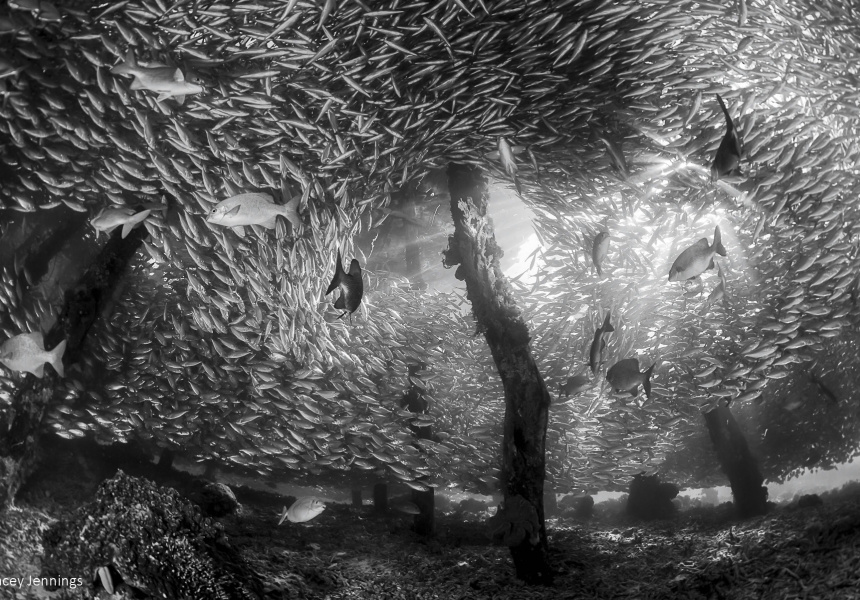 Last night Tracey Jennings was named the 2018 Australian Geographic Nature Photographer of the Year for her black and white photo Hide and Seek. The underwater shot was taken beneath a jetty in West Papua, Indonesia, and captures a vortex of fish escaping from their predators.

The judges – esteemed industry photographers Peter Eastway, David Evans and Stanley Breeden – describe her winning entry as having “a huge amount of energy with a rich cacophony of shapes and an explosion of tonality”.

Jennings is the first individual woman to win the competition and its prize: $10,000 and an Antarctic expedition.

This is the 15th year the Australian Museum has hosted the annual Australian Geographic Nature Photographer of the Year Exhibition, which shows the best nature and wildlife images from established, emerging and amateur photographers. Developed by the South Australian Museum and presented in partnership with Australian Geographic, it features more than 100 images that cover animal portraits, breathtaking landscapes and nature’s wildernesses captured across Australia, New Zealand, Antarctica and the New Guinea regions.

The photos in the exhibition were culled from 2288 submissions taken by more than 508 photographers in 16 countries.

“I’m constantly amazed at the calibre of entries we receive. The finalists’ images help to give us a broader understanding of wildlife, science and conservation,” said Chrissie Goldrick, editor-in-chief of the Australian Geographic magazine, in an official statement.

Included in the exhibition is Robbe Irwin’s Sunset Sky. The 14-year-old avid photographer, and son of the late Steve Irwin ("The Crocodile Hunter"), has captured a rose-hued sunset over the mountains of the Great Dividing Range in Queensland. In an official statement, Irwin said, “I sat below a large eucalyptus tree and utilised a wide-angle lens to showcase the incredible landscape from a different perspective."

The Australian Museum will also be hosting six wildlife-photography workshops for teens and adults in September and November, and evening talks by competition finalists.

The Australian Geographic Nature Photographer of the Year Exhibition runs from August 24 to January 28, 2019.