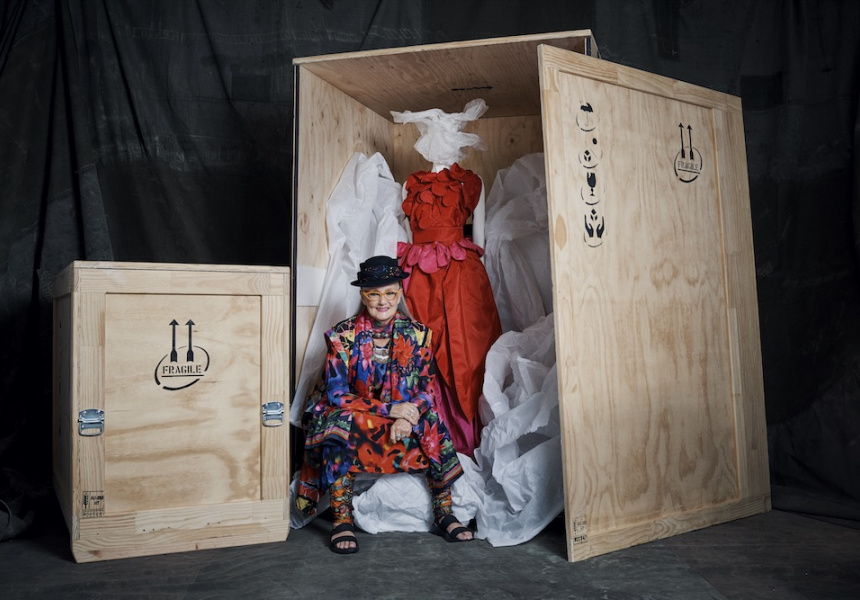 Australian fashion doyennes Jenny Kee and Linda Jackson, known for their vivid Australiana prints, will have their work celebrated in the first major survey of their partnership. It’s opening in the Powerhouse Museum in October.

Jenny Kee and Linda Jackson: Step Into Paradise will trace the artists’ formative years: Kee’s time in 1960s London working at the Chelsea Antique Market and Jackson’s travels through the Pacific, Asia and Europe. It will look at the start of their creative partnership in the 1970s when Kee opened the Flamingo Park Frock Salon in the Strand Arcade in Sydney’s CBD, which stocked Jackson's designs, and then follow their individual careers, including Kee’s designs for the Sydney Olympics and their [collaborations with Sydney label Romance Was Born.

More than 150 pieces of clothing, photographs and artworks, already owned by the museum, will be combined with items from the designers’ own archives. They include artworks by the pair, behind-the-scenes photos from their time working together, Kee’s Chanel suit from Karl Lagerfeld’s first collection for the house in 1983 and Jackson’s Waratah dress.

The exhibition will be immersive; each piece will be displayed surrounded by the environments and objects that influenced the designers: the Aussie bush, the Great Barrier Reef, opals and waratahs.

“When I landed back in Australia in the 1970s, I was immediately hit with this new energy and vibrancy that I felt didn’t exist here when I left, and I wanted to celebrate this,” says Kee in a statement. “The sign on the door of the Flamingo Park Frock Salon was “Step Into Paradise” – it was an invitation to visitors to step into a fantastical and romantic world full of beautiful things celebrating our environment. It was something Sydney had never seen before and we want to replicate this feeling with the exhibition.”

Jackson agrees. “There was such a pride in Australia when Jenny and I met; people were travelling back here because they wanted to be a part of this creative revolution,” she says. “We were proud of coming back and bringing all the influences and everything we had seen overseas back home.”

A publication will also accompany the exhibition with pieces written by Kee and Jackson, chapters written by fashion editor Georgina Safe, and contributions from others who have known and worked with the designers over the years.

Jenny Kee and Linda Jackson: Step Into Paradise will open at the Powerhouse Museum on October 17. Find out more here.