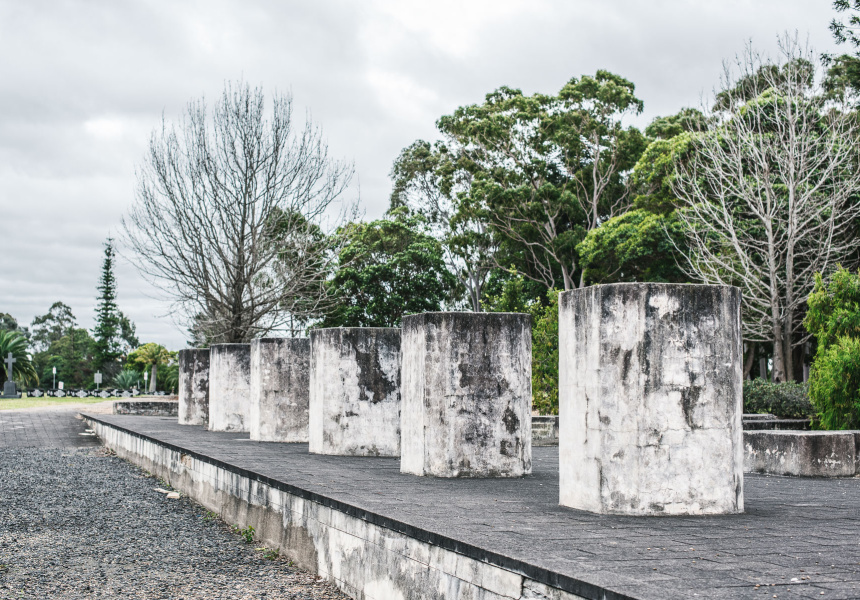 Rookwood is the largest cemetery in the Southern Hemisphere. Its official name is Rookwood Necropolis; the literal translation of its Latin name – “City of the Dead” – rings true: Rookwood’s sprawling 700 acres makes it larger than the Sydney CBD. It’s the final resting place of more than one million people, but to dwell on the dead is to do a disservice to a place that is teeming with life.

Literally – it is abundant in plant and wildlife. In the older parts of the cemetery, which date to Rookwood’s beginnings in the late 1860s, scrub and old trees are tangled up with timeworn tombs and headstones; a happy habitat for frogs and lizards. The crows that screech between trees are said to have helped name Rookwood: a confluence of the name Brookwood, London’s largest cemetery, and the resemblance crows bear to rooks.

It was established in 1867 after Devonshire Street Cemetery – located where Central Station now stands – became overcrowded. (In January 1901 relatives of people buried under what is now Central Station were told to speak up if they wanted their kin’s body moved to another cemetery, but most bodies stayed where they were or were moved, unofficially, anyway).

Originally, access to Rookwood was by train, and for this reason colonial architect of the day James Burnet designed Mortuary Station, the out-of-place, Gothic-style building you see to your left as the train pulls into Central from Redfern. This was the loading point headed for journeys to Rookwood. He designed the station at the Rookwood end, too, but today all that’s left of it is the concrete relief of a platform and tracks. (The rest of it was moved to Ainslie, Canberra in 1957 and became a church). It’s from this point coffins were unloaded and mourners disembarked. They carried beer, wine, food – everything they needed for a wake by the graveside after the service. It was the job of the sober to ensure the drunk made it back in time for the return journey.

Rookwood is alive with history and reflects the city’s multi-faith population. From this central point of the cemetery, graves fan out in different sections and the volume of faiths and cultures they represent is striking. Within the grounds you’ll find all manner of chapels: from a Greek Orthodox Church to a Chinese temple and an Anglican chapel. Today the cemetery caters to more than 90 religious and cultural denominations through 15 different burial types and cremation.

People are often surprised that Rookwood is still a working cemetery, says Mark Bundy, the cemetery’s external operations manager, who has worked here for more than 20 years. The old saying “crook as Rookwood” emerged after the cemetery fell into disrepair during World War Two. Now it’s the income generated by some 2000 services a year that contribute to the site’s upkeep and conservation, and the team here works hard to restore its past grandeur.

There are beautiful examples of different styles of architecture scattered around the grounds. The Elephant House, a red-brick Victorian pavilion, has just been restored in the hope it will be used as a functioning space once again. It had various uses over the years; in its early days it saw some extravagant burials common in the Victorian era, including that of Mei Quong Tart, the popular Chinese businessman who introduced tearooms to Sydney. The Frazer Mausoleum is waiting its turn for restoration. It’s an elegant, “Byzantine Gothic" cathedral-in-miniature that was once the family vault of John Frazer, an Irish immigrant to Australia who became an influential Sydney merchant.

For all of Rookwood’s rambling, crumbling and often confronting beauty, it’s the personal stories like these – of which there are thousands – that make Rookwood such an intriguing place to visit. “I could spend a day walking among the headstones just reading the inscriptions,” says George Simpson, acting CEO of the Rookwood General Cemeteries Reserve Trust. There are the lives of the notable internees to consider: newspaper proprietor John Fairfax and retailers David Jones and Anthony Hordern (who once owned the largest department store in Sydney in the early 20th century).

There are tales of the less famous, but no less interesting: such as the school music teacher, ‎Peter Dodds McCormick, “who felt that the national anthem Australia had wasn’t befitting,” says Simpson. “So on the top deck of a bus on the way home from band practice one night he wrote Advance Australia Fair. That’s just a simple story of someone whose name people might not know but they certainly know his legacy.”

The team at Rookwood is keen to share this history. “Funerals and cemeteries are not for the dead,” says Simpson. “They’re for the living, and that’s what people forget. A cemetery should be a place of remembrance, but it should also be a place for people to come and visit.” Back in the early days when the only way to Rookwood was by train, families would flock here on a Sunday, he says. “[They’d] have a picnic, tend the grave of their relative and then flock back into town at night. It was a real day out for families.” And while no one’s suggesting you pack your sandwiches and jump on the first train to Lidcombe, the team devises other ways to open the cemetery up to the public. Hidden is an annual sculpture walk that takes place among the graves and gardens of one of the cemetery’s oldest sections. Artists respond site-specifically, and guests can visit for free from sunrise to sunset.

Crystal Lindsay is the marketing and communications manager for the trust. She’s an instrumental part of Hidden, which she describes as an invitation to the public to come and explore. “Because it’s not something that people normally do, come to a cemetery and look around, but it is such a beautiful space,” she says. “There’s just so much culture and history here and we want to share that with everyone.”

Rookwood Cemetery calls to mind other famous cemeteries from around the world, including Highgate Cemetery in London, or Père Lachaise in Paris. Of this comparison, Simpson considers: “I don’t know if we will ever be a Père Lachaise, but we’ll always be Rookwood. We’ll always be a place – however which way you speak about it – that will be in the Australian vocabulary. Whether it’s to recognise the cemetery or to recognise how you feel [as crook as Rookwood]. It’s an iconic part of, certainly Sydney’s, but I would also say Australia’s, history.”

The annual HIDDEN Rookwood Cemetery Sculpture Walk runs from August 26 to September 24. The cemetery is celebrating 150 years in 2017.