It’s the oldest existing harbour pool in the Southern Hemisphere; the home of Australia’s first swimming club; and possibly the site of Sydney’s first outdoor cinema. 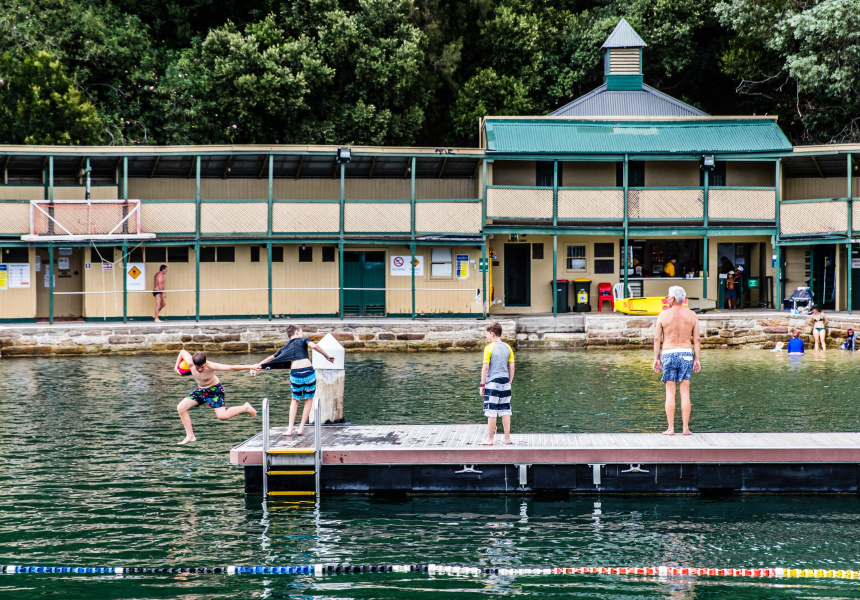 Something about the Dawn Fraser Baths sums up Sydney perfectly. After walking through the steep back streets of Balmain to get there, you first glimpse it through a cluster of trees and bush: a pool enclosed by an old wooden boardwalk and buildings, backed by the bustling harbour. Nature, water, heritage and outdoor activity: is this where you should bring your overseas guests to show them Sydney?

The pool was first built in 1883, and though it has been modified since, it has retained a quaint, Victorian character; it has wooden pavilions and bleachers painted in shades of cream and green. This shark-proof tidal bath would have been a luxury for local recreational swimmers who, before it was built, would swim in Mort’s Dock (also in Balmain) when it was not being used for ship repairs.

But despite its longstanding fixture on the western side of the Balmain peninsula, the Dawn Fraser Baths remain a local secret. Many don’t know about it, and some are put off by the thought of swimming in harbour water alongside the odd lost flounder or stingray. Technically the pool is in the Parramatta River; a little more polluted than, say, Murray Rose Pool (Redleaf), which is closer to the ocean. Still, the locals are in robust health: a group of older men head to the baths every morning – summer and winter (when it’s closed to the general public) – to swim, chat and play cards.

On days like this, the pool’s tranquility belies its busy, athletic history. The first swimming club in Australia was founded here in 1884 and its namesake, Dawn Fraser, grew up in Balmain; she trained here before winning four Olympic gold medals. In around 1888 the first game of water polo in Australia was played at the Dawn Fraser Baths and some years it still hosts International Water Polo games.

Carolyn Allen is a longstanding member of the Balmain Swimming Club, which remains active and meets for a swim and a sausage sizzle every Saturday during summer. She has been coming here since her children were young in the early ’80s and, having moved to Balmain from Bathurst, was attracted to the pool because it felt like a country town. “There’d be little kids and grandmas, whole extended families, rich people and poor people, the new trendies,” she remembers. Allen still recognises the same sense of community and mixture of people at the Dawn Fraser Baths today – unchanged by Balmain’s gentrification.

Allen was one of the founding members of community group Friends of the Baths, which campaigned to preserve the pool in its original form at a point when – in the ’80s – the council tried to take down the pavilions and bleachers and leave just the boardwalk. “But everyone loved the enclosedness,” she says. “It stops the wind, it shelters it, and makes it an intimate space. That’s one of the things that we really love about it.”

The group had fundraising events for its cause. “We had balls down here – every time we had a dance party it rained,” she remembers with amusement. It also installed a screen at the pool (“I think we had one of the first outdoor cinemas in Sydney. Everyone was on floaties in the water, out in the dark.”) It was short-lived, though, lasting only four nights: “The council freaked when they found out!”

The group won its fight in the early ’90s and funds were raised to renovate and preserve the pool. It’s now heritage listed and is the only enclosed harbour pool that remains in its original form in the Southern Hemisphere.

Swimmers should come to the pool at high tide. For kids, low tide is better and a small beach is revealed. When the harbour was still heavy with industry, the sand here was silty and black. Now the water is cleaner – there’s no longer a chemical factory just down the way – and sand is shipped in: two contemporary features of an otherwise Victorian slice of Sydney.

Dawn Fraser Baths is open unless otherwise stated due to water pollution after heavy rain.