The Sydney Actor Who Paints Portraits of Her Cast Members on Toast, With Vegemite

Mitchell works with white bread, sourdough, Melba toast – and some of the most famous actors in the world. Now she’s auctioning off pieces of her art for a good cause. 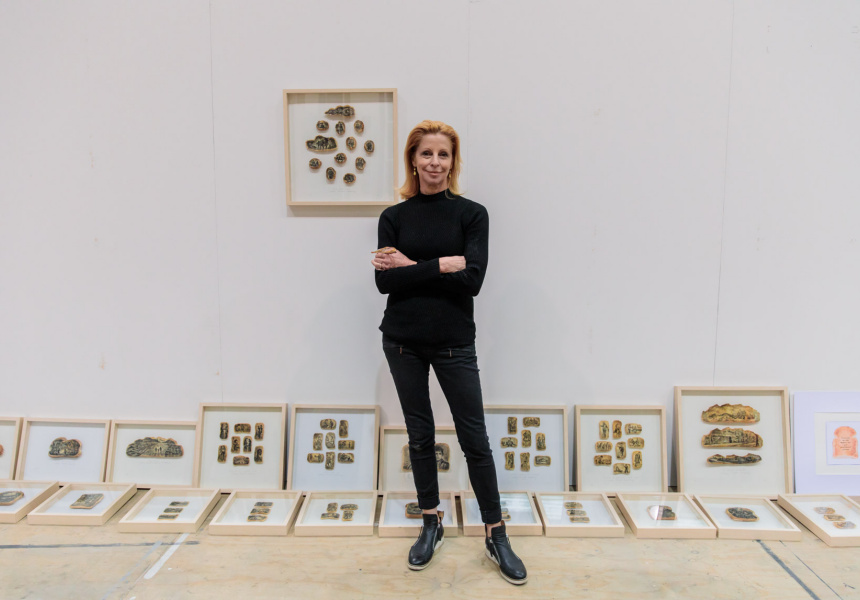 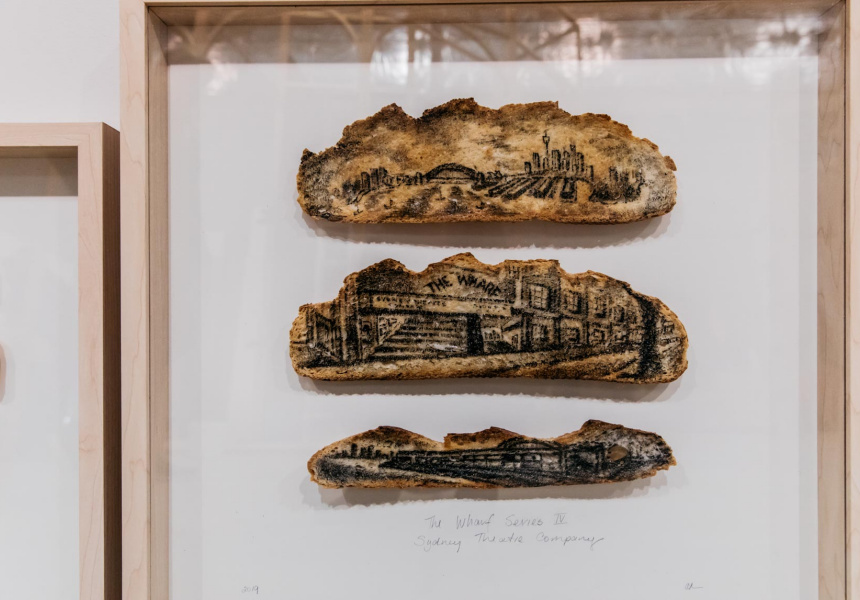 You never quite know what you’re going to get with stage and screen actor Heather Mitchell. Recent roles have seen her completely transform into transgender woman Catherine McGregor, a young boy from the 1860s, and a Pope.

Nonetheless it is still a shock when Mitchell opens the door of the bureau in her Sydney living room to reveal toast. Loaves and loaves of the stuff, neatly stacked on the shelves.

Mitchell has a delightful pastime: in addition to being an acclaimed actor, she’s a talented visual artist who paints portraits of her fellow cast and crew on toast using Vegemite.

It all began innocently enough. In 2010, Mitchell was performing in the Sydney Theatre Company’s (STC) production of Sam Shepard’s True West, which was directed by the Oscar-winning actor Philip Seymour Hoffman (Capote). During a technical rehearsal Mitchell was looking after the twin daughters of fellow cast member Alan Dukes when she came upon a bin full of toast.

“Brendan Cowell’s character steals 30 toasters from neighbouring households and comes home drunk and toast is flying from these toasters, so the stage manager had to chuck out all this toast,” Mitchell says. “I was backstage with the twins, we’d made sock puppets from Alan’s socks, played with make-up, then got some toast out of the bin.” She found some Vegemite and chopsticks and proceeded to use them to paint on the toast.

“It was a lot of fun. The show was set in the American desert so I drew cactuses and a horse, and on closing night I gave Philip two and the cast each one, all framed. I remember Philip opening it and being really touched; he was a very sincere person who felt things keenly. So that’s where it all started, it was just a silly bit of fun and it still is.”

Realising how much she enjoyed the meditative process of painting and the act of gift-giving, Mitchell continued creating portraits and scenes from plays she was in, and even some she wasn’t, giving them to the cast and crew in the tradition of the opening night present.

And she’s fine-tuned her practice over the years. Noting that the toast started cracking or getting mouldy, she experimented with different types of bread and ways to preserve it. She discovered white bread lasts longer because of the high sugar content, while an artist-chef suggested a liquid-based transparent glue to seal the finished product. These days she uses acrylic paint because she found Vegemite slowly changed colour and had more potential for attracting living creatures.

“Some have existed [for] 10 years untreated and are still there,” says Mitchell. “Only one, which I made in a hurry and left lying around for too long before I [glued] it, developed a family of moths.”

She loves a good dense sourdough because of the beautiful shapes of the slices, which she used for The Harp in the South. She turned to Melba toasts for a collage of scenic paintings for the crew – 48 pieces all up – and used baguettes for Cloud 9.

Has anyone ever eaten themselves? “Apparently Toby Schmitz did; his was Vegemite and I hadn’t preserved it. He’s still alive but I hope he didn’t really because it would have been pretty stale,” she says, laughing.

It’s extraordinary to learn she has no training and doesn’t consider herself an artist. But she did grow up in “an environment of creative exploration”, she says, with a forester father who travelled the world planting trees, always carrying a watercolour pad in his back pocket and offering gifts of personalised watercolour paintings to friends and family.

Lately, every spare minute has been devoted to painting because her toast art now has a higher purpose: to raise funds for the STC, where she cut her teeth at the age of 22. Since March Mitchell has spent 100 hours painting 35 new pieces, which will be sold during an event at the National Art School, where she’ll be interviewed by Annabel Crabb. Many of her subjects have signed their portraits (including Blanchett), and some will be at the event (including Weaving, Minchin and Thomson).

“I can’t donate money, but I can donate my time – and I thought it would be a bit of fun to have an event celebrating lots of wonderful actors, theatre makers and audience members. And perhaps you can take something home with you,” Mitchell says.

Toast will be held on Saturday, June 22 at the National Art School, Darlinghurst, from 3.30pm to 6.30pm.