Since the scuttling of the HMAS Adelaide three years ago, the former battleship is teeming with life - and divers. 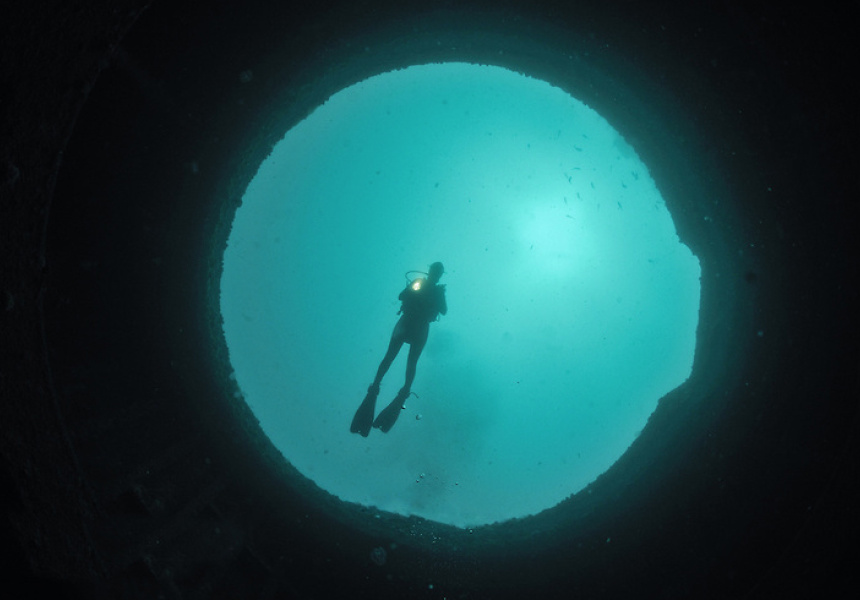 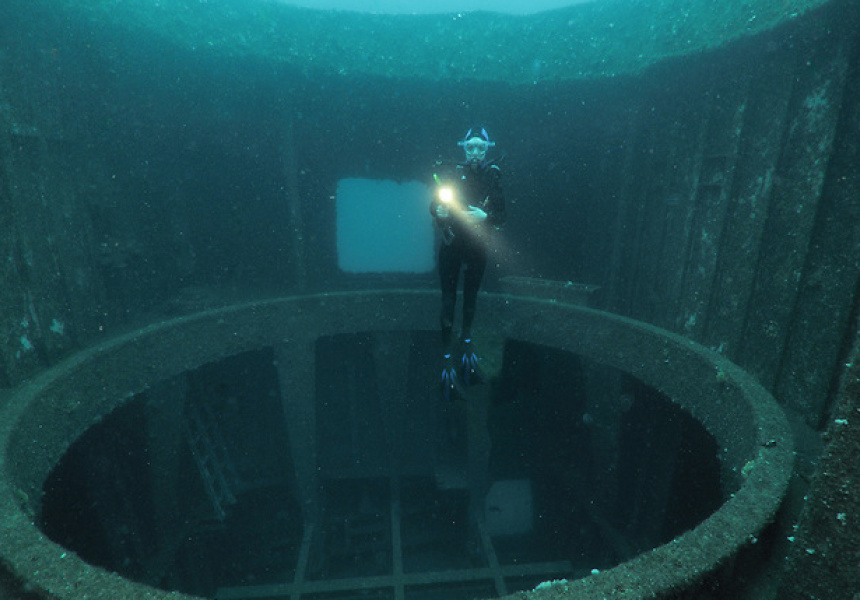 Three years ago, an Australian battleship was sunk off the coast of New South Wales. The plot to sink the HMAS Adelaide came from an unlikely quarter: a group of scuba divers from Terrigal. Its sinking was nothing untoward, however - they just wanted somewhere great to dive.

Their cunning plan was a success. The state’s very first artificial reef, the HMAS Adelaide is swarming with sea life, attracting nautically attuned visitors from all over the country. But its scuttling and subsequent fishiness wasn’t as simple as unplugging the bung - it took years of planning and preparation.

Built in the US in the early ‘80s, the HMAS Adelaide was once a guided missile frigate commissioned into the Royal Australian Navy. At sea for over six months at a time, the Adelaide often served as home to 220 sailors (and a helicopter). The warship had a storied history, seeing active duty in many international conflicts, including the invasion of Kuwait, peacekeeping missions in East Timor, and the wars in Iraq and Afghanistan. It was even the central Australian ship in the infamous ‘children overboard’ affair.

Come 2008, the Adelaide had completed its military service - but the Central Coast community had a new commission in mind. Inspired by other successful shipwreck/reefs like the like the SS Yongala in Townsville, Truk Lagoon in Micronesia and the S.S. President Coolidge in Vanuatu, locals set up a not-for-profit organisation called the Central Coast Artificial Reef Project to lobby for the slightly secondhand warship, which had been on the market since early 2000.

Of course, you can’t just dump 4100 tonnes of scrap metal into the Pacific. Before being laid to rest on the sandy floor, teams at Glebe Island and White Bay spent two years cleaning every trace of oil, fuel, grease and dirt from the ship. Anything that was dangerous was removed or welded shut. Batteries, PCB’s and asbestos were all carefully excised, and extensive monitoring of the site took place, which continues to this day.

Once the ship was ship-shape, it was towed north to its eventual resting place. Holes were cut in the hull in 19 different places, while charges were placed in another 16. The NSW Police, NSW Maritime, Sydney Harbour Master, Transport Management Centre, RTA, Busways, Parks and Wildlife Service, Ambulance Service, Gosford City Council, as well as volunteers from the SES, surf life saving and service clubs were all on hand. Then, at 11.48am on April 13, 2011, the charges were detonated, and jets of liquid copper sheared through the steel hull. After two years of preparation, the HMAS Adelaide dipped below the water in a little under two minutes.

Bob Diaz, chairman of Central Coast Tourism and owner of Pro-Dive Central Coast, was watching the final journey of the Adelaide from his own ship that day. “We were sitting at our boat, at the one-mile restriction limit,” Diaz recalls. “It was the perfect day for the Adelaide to be sunk - it was calm, it was sunny - it was an awesome day.”

In fact, when we spoke with Diaz, he was bobbing above the Adelaide, watching a team of divers drift through the waters below. “I can see their bubbles going round,” he enthuses.

A diver since 1969, Diaz has been impressed by the sheer amount of sea life that’s moved into the Adelaide in little under three years. According to Diaz, every single surface of the ship is now pulsing with life. This year, for example, divers have met a school of kingfish, massive batfish, and a giant eastern cuttlefish named the Bosun’s Mate (he lives in the Captain’s chair). “The amount of fish life is just superb, and it’s going to keep on developing,” he says, listing a wide variety of undersea inhabitants. “The marine life that moved in first was just a little bit of algae. From that algae, we then started to get fish that ate it, and prawns and fortescues. Then we moved on, all the way up to a couple of Grey Nurse Sharks this year. We’ve formed a perfect ecosystem, from the top all the way down to the bottom.”

While the sea life on board the Adelaide has multiplied over the past three years, the shape of the ship itself has also changed dramatically. Apart from the natural degradation of the ship, some massive storm cells have vastly altered the structure. “It’s changed. It’s no longer just a ship. Quite often, if you looked at it, you wouldn’t recognise it as being a ship,” he says. “Even when you go right up to the bow, the bow itself is starting to change. It’s no longer pointed and angular. It’s got that softer, rounder shape.”

While the site has been prepared specifically with divers in mind, to visit the Adelaide you’ll need at least some experience underwater. A course in open water diving is a must, though you can do that over a weekend near the site itself. “This ship is designed ideally so that they can do their advanced course on it,” explains Diaz. “They can do their skindiver, they can do their search and recovery. The experience level just comes with time being out here.”

Diaz believes the creation of the new reef has been a real boon for the Central Coast. Every diver, he explains, generally brings at least one family member with them who don’t go underwater. “They might not be diving, but they’re out there shopping, walking around, having ice-creams and cold drinks, spending money at other attractions we have in the area,” he says. “I can honestly say, the amount of people who are now diving on the central coast just because of the Adelaide, has really brought the central coast to the fore. It really does bring people here.”

All in all, it seems the sinking of the HMAS Adelaide is a fittingly peaceful end. “I’m sitting out here at the moment, and it’s just full of fish,” enthuses Diaz. “There’s fish jumping out of the water right now while I’m talking to you.”

For more information on how to dive the HMAS Adelaide, check out hmasadelaide.com