Get to Know Tom Polo

Watch one of Sydney’s most exciting artists painting live inside the Art Gallery of NSW. 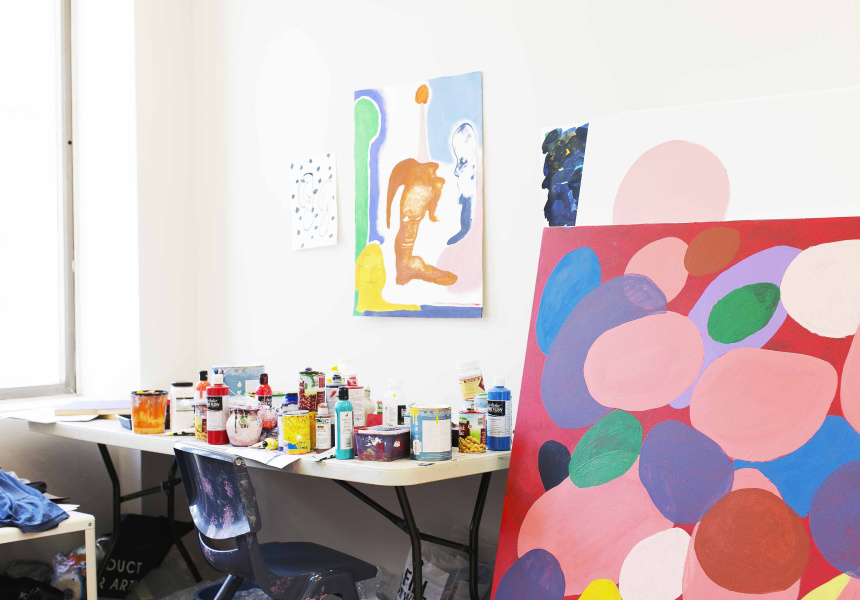 Parramatta Artist Studios houses the workspaces of some of Sydney’s brightest and most promising emerging artists. It’s, unpredictably, on the second floor of an ordinary office building on Macquarie Street in Parramatta City. It is also the current studio home of painter, Tom Polo.

It’s 40 degrees and rising on the day we visit, but, as with any office block, the studios are ice cold because the air-con is on. There’s short grey carpet and fluorescent lighting, and the rooms overlook the busy, blistering street below. As we move through the bureau-turned-studio, Polo assures me that the Arnott’s Assorted biscuit barrel is always reliably replenished.

“I see the studio as a site for problem solving,” says Polo. One wall is lined with A4-sized paintings on paper. Stacks of larger canvases rest in the opposite corner. “Because I don’t paint or make work that is sequential in terms of completion, it becomes a process of erasure and redevelopment,” he says. “And I think that’s what the studio is about for me – reassessing and reworking ideas.”

While Polo has only been in this studio since December, he’s had an enduring relationship with Parramatta Artist Studios – he entered the fold during its early stages. “When I graduated from art school I was looking in the paper and I found an add for this studio that was just starting up. Michael Dagostino had just launched the initiative with Parramatta City Council,” Polo says. “The artists here are acting as ambassadors for arts practice in western Sydney, but we also have the ability to be open to new and changing ideas.”

Polo’s style is immediately recognisable – abstract portrait pieces rich with emotion, and bubble-shaped prose in striking colours that can be at once emotive and ironic. “I’m interested in people, human relationships that come out of the way we interact, both in public and private spaces,” he says. While portraiture forms a big part of his work, his paintings are never drawn from life. They’re absorbed and compiled through experiences and encounters. “I think what is borrowed from life is a sentiment or a gesture that someone is embodying,” he says.

Polo’s repeated use of a particularly bright Yves Klein blue is alluring and familiar. He shrugs when I ask if this blue holds some kind of significance. “Colour is so important to my work, but it’s often only when people say something like that to me that I register those things. I think we resonate with certain colours, not even consciously.”

Over the past few years Polo’s paintings have captured the attention and admiration of a discerning art scene. His name has appeared on the bill for group shows at Melbourne and Sydney galleries such as STATION, Sullivan+Strumpf, Gallery 9, Utopian Slumps, Artspace and Alaska Projects.

Polo has also attracted a wider audience through a series of intriguing outdoor projects. All I Know was a series of six text-based paintings on billboards set along the train line between Minto and Ingleburn stations in Sydney’s west. Commissioned by the Campbelltown Arts Centre in 2014, the six-part piece presented a sentence in fragments, “All I know is that we just keep doubting ourselves”. “These projects were about widening audiences, or widening who sees art outside of a gallery space,” says Polo. “It allowed other audiences to participate in the work. I’d travel on that train and hear people talk about it, which was pretty amazing.”

Polo is determined to continue to push the boundaries of painting and painting practice. Aside from winning the Brett Whiteley Travelling Art Scholarship in 2015, which will see him spend three months in Paris later this year, Polo will also be live-painting a wall in the entry way of the Art Gallery of NSW in March. Some of his text-based pieces will also feature in a group show curated by Barry Keldoulis for Art Month in the new Golden Age Cinema and Bar gallery space. The exhibition, Green-eyed monster eating its own tail, shows works in which artists discuss the art world.

Green-eyed monster eating its own tail is open until March 20 at the Golden Age Gallery.

Tom Polo will be live painting at the Art Gallery of NSW as part of the Spectrum Now festival, everyday until Sunday 13 March. He’ll present a talk on the project on Wednesday March 9 at 6pm at the AGNSW.