The artist’s exhibition features a series of paintings and sculptures depicting the life and death of the Great Barrier Reef. 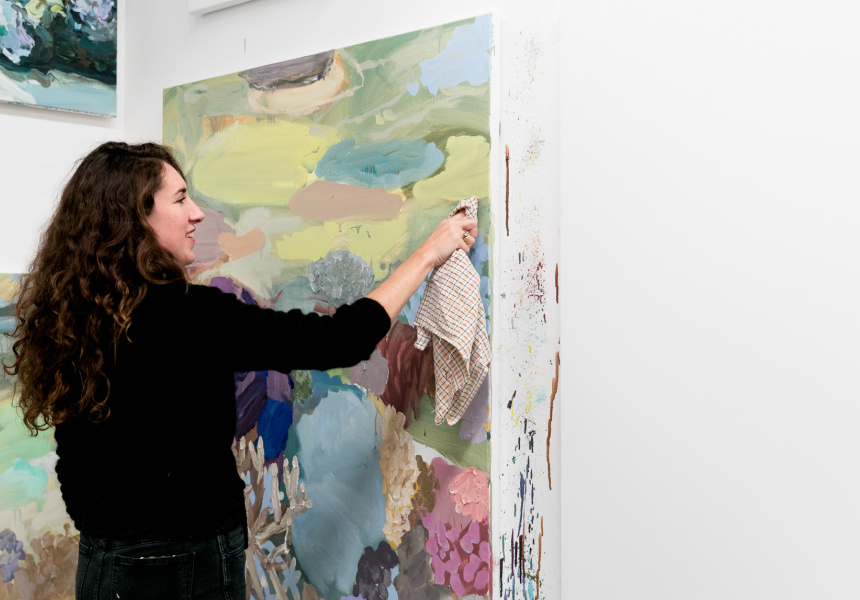 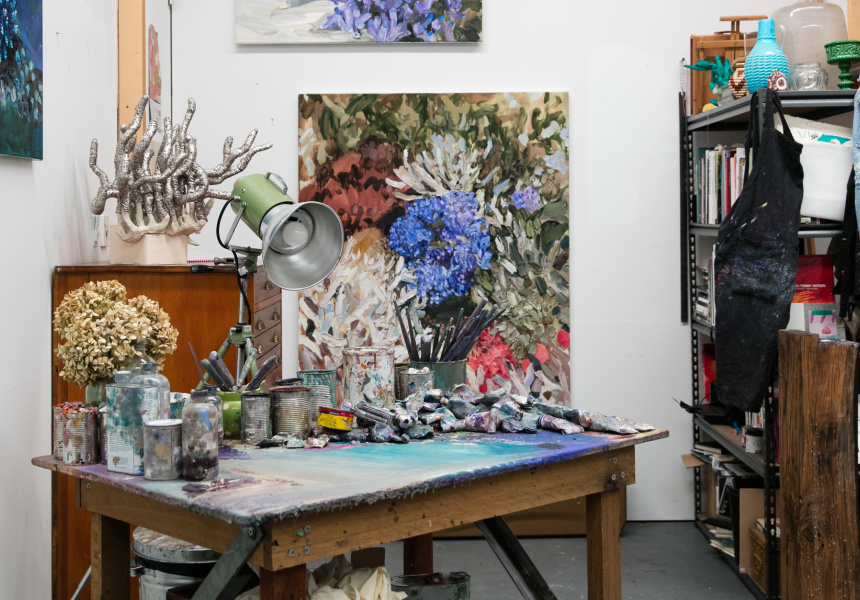 Visiting Laura Jones’ studio is like being a kid in a lolly shop. It’s colourful and engaging, and the temptation to touch everything runs high. There’s some cool, unidentified, bluesy music playing that seamlessly matches the mood of the space.

It’s hidden in the backstreets of studio-strewn Marrickville. The studio is one of six –all divided from one large space – shared with Mirra Whale, Celia Gullett, Sally Anderson, Julian Meagher and Guy Maestri. “It’s a nice, quiet hub of creativity,” says Jones. "We sit up here and do our thing, it’s nice to be able to chat about our work over lunch. We can talk to each other over the walls.”

She’s currently preparing for her upcoming exhibition at Olsen Gallery, Bleached. While some of the paintings are stacked against each other, others – still works in progress – are mounted on white walls. The polished concrete floor is speckled with flicks and drips of paint; every hue on the spectrum is there. The walls have coloured freckles too. “With studios, you just need a space to make a mess, and good light,” Jones says. There’s a vase of dried hydrangeas, books about coral, a small brown couch, and tubes upon tubes of paint, affectionately known as “friends”. There’s also a few squiggly, coral-shaped clay figures on plinths; they’re part of her new series.

Best known for her still-life oil paintings of flowers, Jones, a mountains girl at heart, worked as a florist in some of Sydney’s loveliest shops throughout her arts studies; Grandiflora, Summers Floral and Poho. It was this work that inspired her.

“Floristry was a great job and a beautiful way to stay connected to nature in Sydney. I think when you work with your hands you get to know your subject really well, and you should always paint what you know, so painting flowers was a natural evolution.

“There was a big change, however, when I moved to this series from flowers. It’s quite fun. Coral isn’t flowers, I’m aware of that, but taking away the vase and painting coral like underwater gardens has allowed me to let the observational side of the practice fall away and become more playful.”

The series is inspired by the Great Barrier Reef and the mass bleaching events it’s experiencing due to climate change. After taking up an artist’s residency on Lizard Island (where the reef suffered massive loss) in August last year, then another more recently on Heron Island (where the reef is still alive), the series portrays the reef and it’s coral, both bleached and alive.

“Essentially it’s like two exhibitions,” she explains. “There’s the Heron Island series, they’re really colourful, and abstracted, a celebration of the reef I suppose. Then there are the darker and more literal paintings I made after Lizard Island.”

It’s safe to say that Jones will continue with environment-based works.

“I think it’s important to make work about climate change. We have a very narrow window of opportunity to use our voices as artists. Scientists bring one kind of voice but artists bring another.”

Laura Jones’ exhibition Bleached is showing at Olsen Gallery, Woollahra from Wednesday May 17 to June 4. Jones’s exhibition is accompanied by the launch of a self published book with contributing essays by Prof Jane Williamson and Prof Michael Gillings of Macquarie University plus drawings and paintings from the residencies on Heron and Lizard Islands. Available to purchase from the Olsen Gallery for $40.