Jedda-Daisy Culley, the artist behind the Desert Designs clothing label, has an exhibition of paintings inspired by the Western Australian landscape. Visit this weekend. 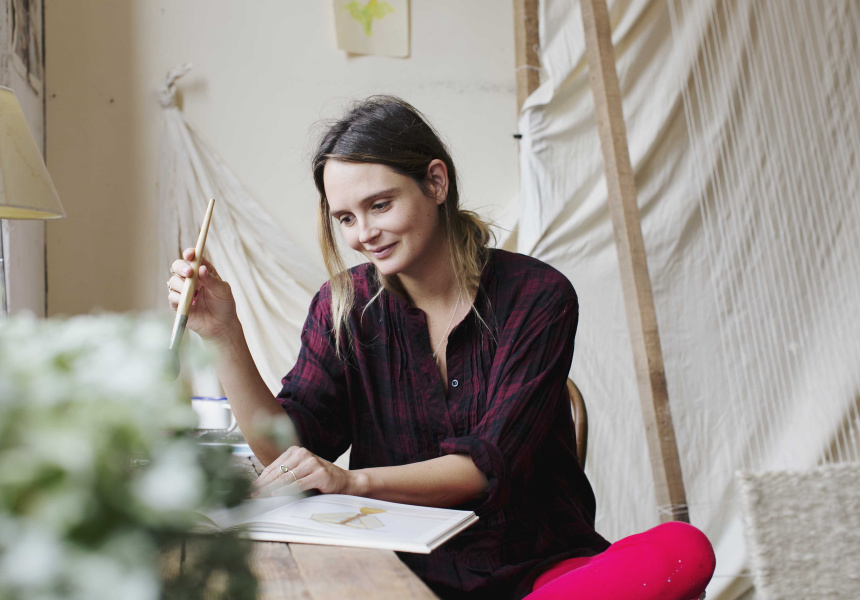 The elevator leading to West Australia-born, Sydney-based artist Jedda-Daisy Culley’s studio is crimson red, overlaid with graffiti and splattered with paint. Lit by a single, flickering fluorescent, the level-five button is angled slightly sideways – and I wonder if I should have taken the stairs. Up on the fourth floor, however, Culley’s studio feels vastly different. The lift opens, revealing a sunlit warehouse space, with high ceilings and wide views across Surry Hills’ east. The walls are lined with Culley’s soft landscapes and weaves. The driving force behind the vibrant clothing label Desert Designs, Culley is preparing for a new exhibition of her paintings titled Universal Love at Mild Manners gallery.

“My dad is an artist and he started Desert Designs just before I was born,” explains Culley. While teaching art lessons in a maximum-security prison in Freemantle in Western Australia, Steve Culley connected with Indigenous artist Jimmy Pike. The pair founded Desert Designs based on their friendship and a mutual love of colour, translating Pike’s super-bright patterns on to silks and cottons. Growing up in a house filled with artworks, Culley felt a natural inclination towards creative pursuits and painting. “I did have a real passion for it,” she recalls. “I would set up studios in my parents’ house and work away on little projects.”

More recently however, the artist has established a more permanent working space in this Surry Hills warehouse, and it’s here that she has developed most of the works for Universal Love. Culley shares the space with two other creatives, but there is still ample space for her various work stations – one for oil paints, one for watercolours, and another section for more meditative weaving. “I’ve always been interested in painting, and this show is all paintings,” she says. “Although my practice has become more multidisciplinary and I’ve incorporated both weaving and sculpture.” An arresting, oversized circular loom rests in the corner, with thick woolen knots crisscrossed from one side to the other – a yet-to-be-finished feature piece for her next body of work.

Citing James Turrell and Sidney Nolan as inspirations, along with colourist Sonia Delaunay and Indigenous landscape artist Billy Benn – Culley’s abstract sceneries are layered over with soft colours, each seemingly affected by waning light. Rocks in ochre and rouge reach out to sprawling sunsets in peach and mauve. “I think these paintings probably reference growing up in WA, too. We don’t have the same landscape that exists here on the east coast, with rocks framing the horizon. There’s such an expansive sky, and then sea. It’s quite powerful.”

The paintings in Universal Love draw inspiration from Culley’s work with Desert Designs and the living landscapes of the Great Sandy Desert, but also from pooled ideas of anthropomorphism, Indigenous Australian connection to the land and Rudolph Steiner’s theory of creation. “Working through Jimmy Pike’s archive, and constantly referencing the stories I’ve learned about landscape, having a sense of spirit has been a huge inspiration in my work, but I’ve also developed some of my own thinking around those ideas,” Culley says. “The notion of “standing in the land”, which is the idea that humans don’t walk on top of the land, we are part of it, walking within the land.”

While Steiner might be more typically associated with alternative education theories, Culley is interested in his spiritual philosophy, anthroposophy, addressing the question of how we can transcend our inner selves, our intellect, to find a true spiritual dimension. “It’s the idea that everything standing up is alive,” she says. It is a concept easily conjured by human imagination, recurring throughout history in art and literature, even in the way children choose to relate to the world around them – giving human-like qualities to flowers, insects or rocks. “These works in particular look at rocks, the idea that there is a conversation or harmony going on between them, under a certain light – that they are alive as well.”

Universal Love is at Mild Manners until February 13.