We drive down to Robertson in the Southern Highlands to visit acclaimed artist, Ben Quilty, in his painting studio. 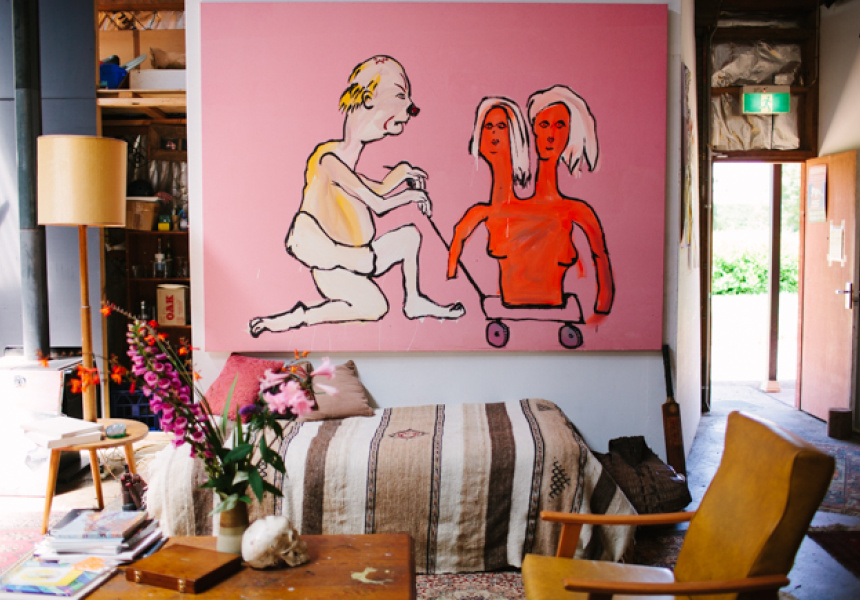 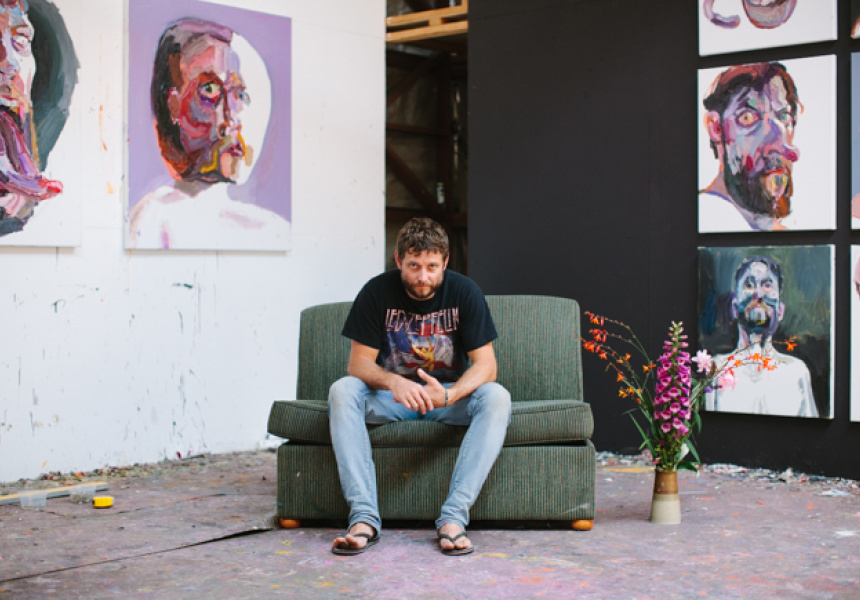 Ben Quilty is perched on a stool by a workbench in the great atrium of his warehouse studio, surveying a canvas made up of eight panels each wearing his signature earthy tones, and bold, caked paint. It’s a warm afternoon in Robertson in NSW’s Southern Highlands, where Quilty both works and lives with his family. A thick corridor of hot sun crosses the middle of the space, but doesn’t quite light the darker shadows and lines of this particular painting. “This is of Kuta Beach in Bali,” he says. “A beautiful place. But a place that has a very dark and complex history.”

The other wall of Quilty’s studio is lined with portraits – roaring faces, struck with the effervescence of emotion, and then occasionally long, twisted noses. The artist has just been awarded first place in the best painting category at the inaugural Prudential Eye Awards in Singapore, and part of his prize includes a solo exhibition at the internationally acclaimed Saatchi Gallery in London. Some of these new portraiture works will soon be boxed up and sent north for the exhibition, which is set to open in early July of this year. “I’m the first Australian to have a solo show there,” he says. “I think the people that told me that were trying to put pressure on me – and it worked. I was like, are you serious?” The Saatchi show will act as a survey of Quilty’s practice, and will also feature some older pieces, including one currently owned by the Art Gallery of South Australia.

The thick of the London art world is, however, a long way from the quiet and calm of Robertson’s rolling green gardens. ‘I’ve always felt that if you have the opportunity in Australia to live in the country, why wouldn’t you take that opportunity?” says Quilty of his decision to depart his Annandale home in Sydney’s inner west some seven years ago. “People come from all over the world to see the natural parts [of Australia], particularly on the east coast. So I’ve always thought that if we could do it, why wouldn’t we?” But there is no sense of disconnect in the distance from city life and its dizzy cultural scene for Quilty. “I’ve been showing every year in Singapore, Hong Kong and Korea. We’re always going to those parts of Asia. Which is sort of the polar opposite, or the antithesis of Robertson. You get that real cultural injection of humanity. And then we come back to paradise.“

Indeed, the significance of place is important in Quilty’s work – the stories, the secrets and the truth hidden within various sceneries. “I’ve been going [to Bali] to visit a young man who is on death row in Kerobokan Prison,” Quilty says as he nods towards the panelled beach landscape hung in his studio. “And only eight kilometres away is this beautiful idyllic Kuta Beach. So I suppose these paintings are about forcing the viewer to put themselves in, or to recognise their part in these places.”

The Kuta Beach piece is one of Quilty’s Rorschach-style paintings – much like a butterfly, they are symmetrical from the centre outwards, achieved by pressing, or squashing the fresh paint of one canvas onto another. “It’s a squashy,” he smiles in reference to the technique. “That’s what my little boy calls them.” The idea is actually drawn from the Herman Rorschach inkblot test, and the symmetrical shapes used to determine levels of paranoia and mental illness. In Quilty’s painting, heavy black bat wings are spread across the eight canvas boards. “If you see something in the shape you’re showing paranoid or delusional behaviour,” Quilty explains. “So there’s sort of a joke in these that you can obviously see something.”

In the corner of the studio, Quilty’s portrait faces are powerful and arresting. His style of portraiture is not concerned with true likeness – features are smudged and blurred with thick strokes of paint. The truth of his subjects exists instead in the rich human emotion in each piece. “Portraiture for me is about depicting someone that I know and respect and I’m interested in,” he asserts. “It’s about the relationship, the collaboration between the artist and the sitter.” For his 2011 commission as official war artist of Australia, Quilty asked commodores and corporals to pose nude after he spent a month alongside them in Afghanistan. “Their uniform is designed to intimate … so there’s sort of a layer of hiding their feelings, so as soon as a I got them to get their gear off, it was like I was metaphorically getting into their soul.”

Quilty’s unabashed connection to his subjects is strong – whether he is painting landscapes or faces, beaches or bodies, he unfolds a convincing, sometimes confronting series of truths. “Part of being an artist is the idea of truth,” he says. “This is maybe overused and misunderstood I think, but that’s really at the heart of what being a good artist is about.”