The man who dreamt up Radiohead's album artwork has just built a mad fortress at Carriageworks. 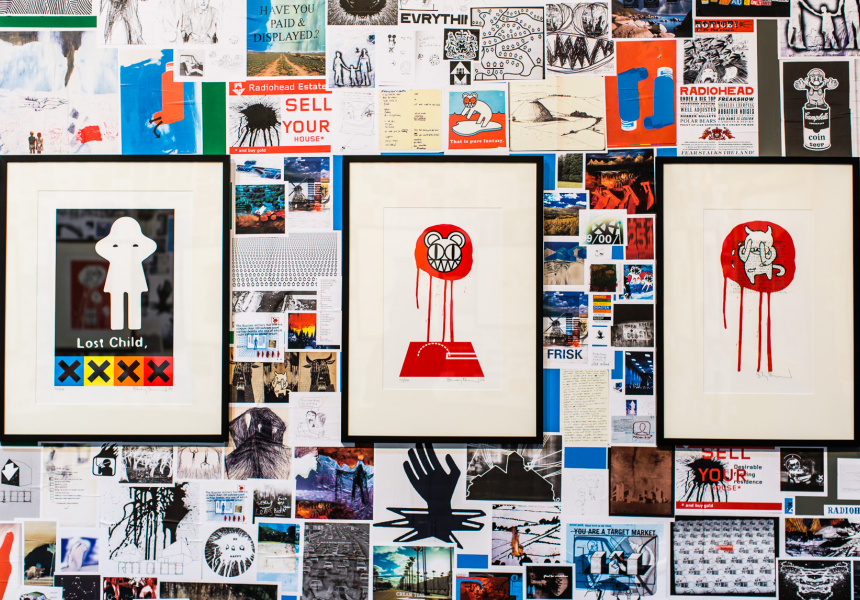 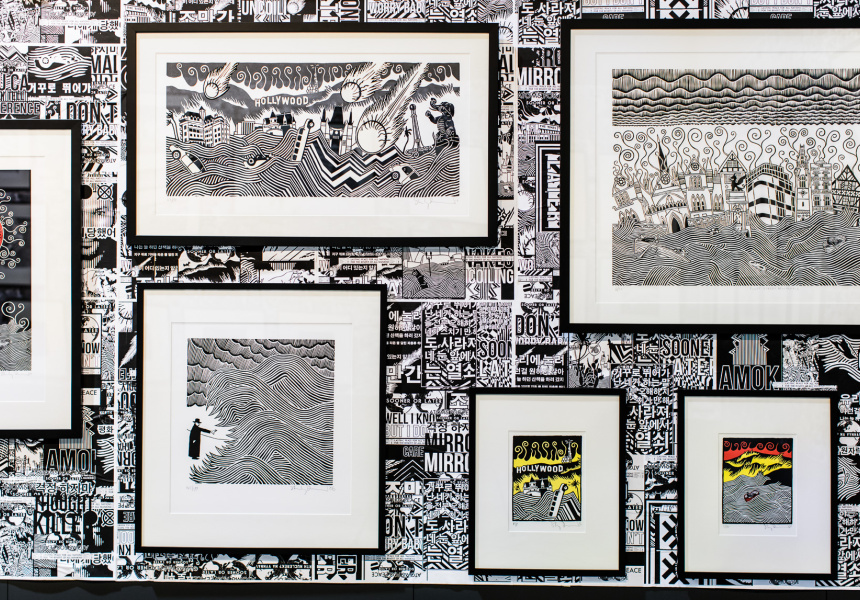 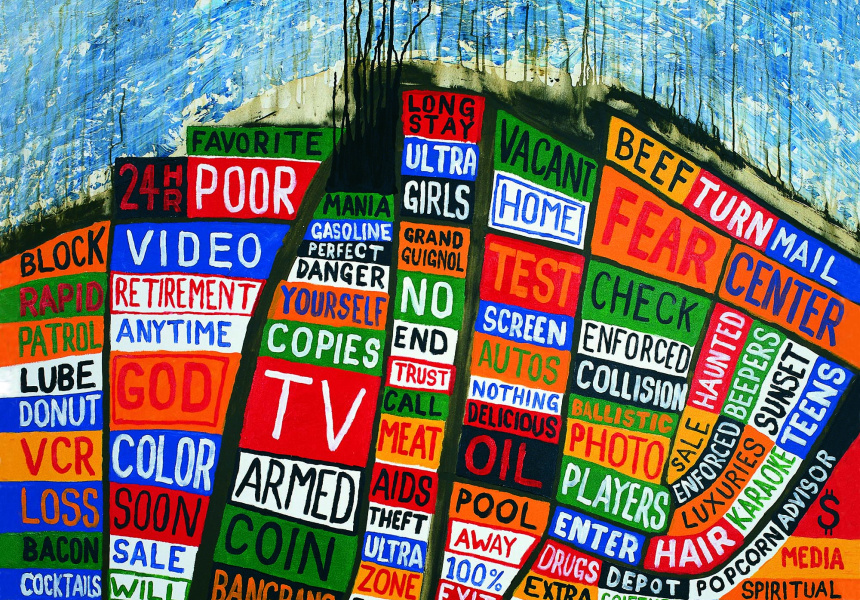 Pacific Coast/Hail to the Thief (detail)

Dan Rickwood is playing truant. Radiohead is back in the studio and if he were at home in England right now, he’d be working the cover art for its next album, under his pseudonym, Stanley Donwood. The latest in a long line of collaborations, Rickwood has created the visual identity of every Radiohead (and Thom Yorke solo) record since the 1994 single release of My Iron Lung (after he and Yorke became friends at university).

But instead he’s in Sydney, working with some guys from local design studio D3 to build a mad fortress in a huge warehouse at Carriageworks – and filling it with all his work of the past two decades.

Stanley Donwood: The Panic Office is part of art and design conference Semi-Permanent. While Rickwood has held exhibitions of his work before – often large-scale, multimedia affairs like this – he’s never done so in Australia.

Semi-Permanent’s curator Murray Bell has been asking Rickwood to participate for six years and this time, the planets aligned. Bell was inspired by the prospect of turning Radiohead’s artwork into an experience for people and by the opportunity to create something totally unique. “Stanley’s two decades of collaboration with these musicians is almost unprecedented, so we needed to create something unprecedented also,” he says.

Rickwood himself insists there’s nothing new in this show. It’s all reproduction: prints from editions and giclée prints of paintings on canvas, framed with the, “shittiest, lowest quality wood I could find in Bunnings” (so as not to present them as something they’re not).

But he does accept that the installation itself is, in Bell’s words, unprecedented. So one-off, in fact, that it even comes with its own soundscape, Subterranea Version II, created bespoke by Thom Yorke and to be wiped from all iPods after the show.

Rickwood is self-deprecating, funny, acerbic and generous company. He is politically charged and his anger at what’s wrong with the world spills into his conversation and artwork, wrapped up with many weird and wonderful ideas.

Right now, all of this manifests as an installation that’s designed to look like a, “Punk version of an Iron Age stockade fort,” he says. “As if it had been built by – I believe the local term is ‘bogans’ – psychotic bogan Iron Age warriors from Australia with loads of corrugated iron. Corrugated iron is almost the national architectural vernacular. It’s everywhere. I love it.”

The idea of a fortress loosely alludes to immigration policies the world over. “In countries everywhere there seems to be a movement towards an increasing nationalism and isolationism,” he says, before laughing at himself. “If I was writing bullshit for an essay, that’s the sort of thing I’d say. It’s also, more directly and possibly more honestly, like a memory palace.”

Inside the spray-painted, fly-postered fortress are rooms full of memories. Radiohead fans will find it all very exciting and others will no doubt be impressed by the scope and scale of vision. Albums are represented as separate spaces, with final cover art and a host of previously unseen outtakes.

Then there’s Rickwood’s “clunking metaphor” of the “Goat Room”, in which portraits of fat cats with heads of goats hang in a space littered with cash and champagne, visible only through a peephole. There’s the “Shrine of Bear”, too, dedicated to the pointy-toothed bear that has become Rickwood’s unofficial trademark. He’s asking people to Google “stalker shrine” and contribute photographs of their own Bear-related ephemera to the show. There’s also evidence of Rickwood’s other creative projects: since 2002 for instance, he has created the artwork for Glastonbury Festival incognito (until his cover was blown last year).

Throughout all of this – from the semi-abstract paintings of Kid A to the monochrome linocuts of Thom Yorke’s The Eraser – there’s something distinctly Stanley Donwood about it all.

“There is a thing isn’t there? But what is it? What is that thing?” Rickwood wonders. “If anybody finds out what the underlying theme of my work is I would love to know.”

Whatever it is, it’s synergistic with Radiohead’s musical style and his collaboration with the band is a happy one. “Kind of like being at art college, but without the annoying tutors telling you what to do,” he says, speaking from the bitter experience of getting a D in his art A Level (high school exam). “I painted my local town shopping precinct with an atomic explosion erupting from it. They didn’t appreciate it!”

His jaded adolescent vision ultimately paid off: Rickwood’s most recent dabble in atomic explosions is the painting Nether, used as part of last year’s Glastonbury artwork and featuring prominently in The Panic Office. The original was sold before it saw the light of its private view. One of the “many reasons” Rickwood signed up for the show was to inspire similarly disillusioned teenagers to create, wondering how he himself would have turned out had he been born in Sydney.

“I find it very nice here,” he says. “I’m staying in Surry Hills – everyone’s got a yoga mat. They’re all totally beautiful and there’s a fantastic range of beards. Everyone’s very upbeat – the national catchphrase is ‘no worries’. But I find it a bit weird. I feel like I thrive on a kind of weary, cynical and bleak outlook. But do I really? Or am I romanticising an outmoded teenage ennui that I’ve kept going? What’s wrong with being happy?”