Fearsome, inventive and prodigiously talented, Annie Clark brings the noise, and the poise, to her Australian tour. 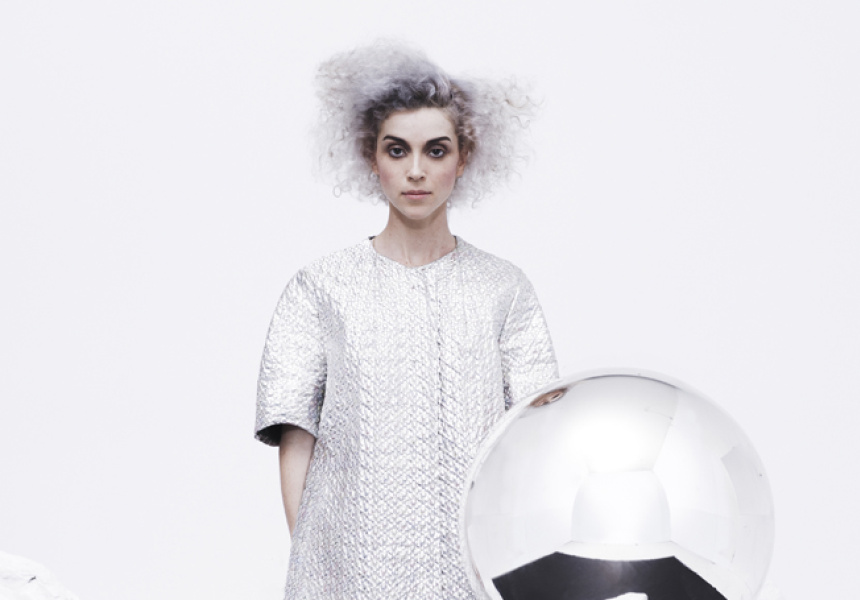 It’s as though Annie Clark, who goes by St. Vincent, has stepped out of another realm. Her press shots show her atop a throne with a shock of grey-lilac hair, wearing what looks like futuristic ceremonial garb. The pictures and the cover of her self-titled fourth album suggest she is not only of another world, but that she rules that world, and the barrier between it and pop music as we know it has been broken down. By her.

Clark is a multi-instumentalist singer-songwriter, a former member of the Polyphonic Spree and was part of Sufjan Stevens’ touring band. Clark began playing guitar at 12, had her first show at 15 in Dallas (where she grew up) and toured as a roadie with her jazz duo uncle and aunt, Tuck Andress and Patti Cathcart (Tuck & Patti). Her fierce instinct for music and playing guitar was apparent even then. Andress describes her as holding nothing back on stage, saying in an interview, “Even at that early age she was able to go into an all-or-nothing performance mode … when she was on stage, she was like a fireball." She toured Japan and Europe with them on separate trips before studying at Berklee College of Music in Boston. She dropped out after three years. She clashed with the school’s pragmatic approach which, according to Clark, did not prioritise creativity enough. "Knowledge is something to fall back on if you get stuck, but ultimately the goal is to play with abandon," she has said before when asked about her aptitude with the guitar.

Her teenage years were spent down the rabbit hole of music obsession, listening to and pulling apart everything she came into contact with. It turned her into a collector of sorts. She has all the tools to match prog-rock guitar riffs with the non-linear structure of jazz. Kooky pop hooks with a dark edge are matched with soaring vocals, jagged guitars and synthesisers to create songs that are strange, unnerving and beautiful. The tracks on St. Vincent take sharp, dark twists without sacrificing melody. At times St. Vincent threatens to tip over into discord. But the listener always has the sense Clark is completely in control.

For all its intensity and precision, this album is also playful, irreverent. Lyrically too. Most important to her is the groove. “If you have something people can nod their head to, and maybe dance to, you get a lot of leeway to take chances with what’s layered above it,” Clark tells me over the phone from LA. “That’s a lesson I have taken from hip-hop; being sonically very adventurous. Layering over big beats.”

With St Vincent – but also with her three previous albums (Marry Me, 2007; Actor, 2009; Strange Mercy, 2011) and her 2012 collaboration with David Byrne, Love This Giant – she has created a world where contradictions merge. “It’s about a balance. About trying to create a world where opposing things can coexist and still feel authentic,” says Clark. “Life isn’t one thing all the time. So I just try to put all of the colours I hear in my head into music and at least make an idealised world.”

I put it to her that critics have called St. Vincent the most St. Vincent-sounding record she has done. And they have called it her most confident. She brushes off what she appears to think of as an obvious statement with: “I think it’s natural the more you do something the better you get at it.” Then she softens. “I was reading Miles Davis’ autobiography and he talks about how the hardest thing for a musician to do is to sound like yourself. And I would agree, that’s what every musician really strives for – to be able to create a world that is unspeakable.”

“You can hear one note and know that it’s John Coltrane. It’s the macro into the micro. You can put your whole world into one note.”

Her approach to performance is equally frenetic yet carefully orchestrated. “Different situations call for different types of performance,” says Clark. “Obviously I act differently on stage to how I would at a dinner party. That doesn’t make the performance on stage any more ‘real’.

She describes her onstage shows as a “really surreal fever dream.” But again, in St. Vincent’s signature style, one that she is in complete control of. “I like to be prepared. But it is always part of a good performance to have parts that are out of control, where you can let chaos in.”

“I put a lot of time and effort into the idea that once you get up on stage, people are listening with their eyes. The shows are visually thought through. There’s choreography to invoke a subconscious narrative. There are moments that are violent and aggressive, and moments that are quite still and beautiful.”

In the world of St. Vincent/Annie Clark, these can exist at the same time.

St. Vincent plays the Sydney Opera House on Sunday May 25 as part of Vivid LIVE.