And a men’s fashion store, Non-Type. 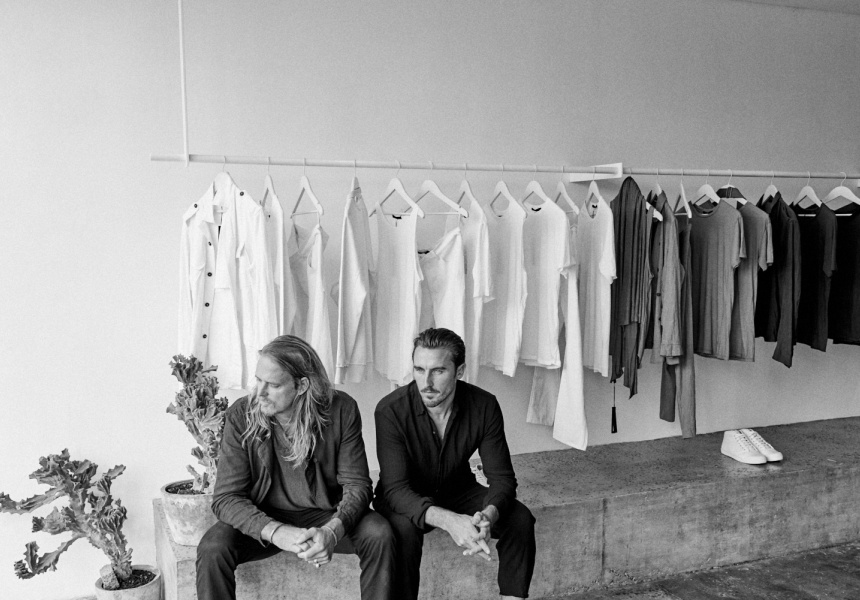 The designers and founders of Ksubi have opened The Slow hotel in Bali. It’s Gareth Moody and George Gorrow’s first creative partnership in a decade. Gorrow’s wife Cisco (model and health coach) is also behind the project; it’s an open book of the trio’s passions.

With the rice paddies and leafy hills of Ubud rising behind, the Brutalist-inspired building is otherworldly. One might wonder what such an experimental piece of architecture is doing in Canggu. The austere facade is dressed in native Bangkirai hardwood, strong enough to withstand the tropics. Dirt tracks, banana groves and tin-roofed houses with laundry hanging on the patios surround the hotel. It’s only 200 metres from surf beach Batu Bolong.

“I came to Bali seven years ago to put my feet up, relax and watch the grass grow with my wife. My live fast, die young days were slowing down,” says Gorrow. But the couple received an offer they couldn’t refuse, pulling them from their lounges to New York. They returned to the island a few years later to find it had moved on without them.

“The land we’d been keeping for our island home was now smack bang on the busiest street in Bali, so we had to switch the idea up. That’s how The Slow came in. It was our first real entry into the hospitality world,” says Gorrow.

The Slow has inherited familiar neighbours Maurice Terzini and Frank Camora. “It's one of the fastest growing areas in Bali right now,” says Gorrow. “It’s a tiny, tiny island so everyone is quite tight and helps each other out.”

Every part of the 12-room hotel has been carefully designed – the soundtrack, retail, art and local cultural elements combine to create a holistic experience.

RETAIL
The real curiosity behind The Slow is Moody and Gorrow’s return to fashion, with new men’s label Non-Type. The hotel’s flagship store is the exclusive stockist. One month in and 50 per cent of stock has already sold out, with a waiting list on certain items.

Why only men’s clothes? “It’s both George’s and my area of strength, we design with ourselves in mind,” says Moody. It’s a luxury surf label, with leather blazers, wool trousers and linen suiting as well as tailored board shorts. “Obviously the majority of our clients are men, but certain items are unisex,” he says. Every piece is produced in Indonesia and is hand-finished.

DESIGN
Tropical Brutalism – that’s how Gorrow describes the look. He collaborated with ultra-minimalist architect Rieky J.Sanur (GFAB Architects), who also worked on the Four Seasons Sayan. A local feel was essential – native timber, handmade materials and an open design combine with more than 80 different species of local plants. The walls are even made of local sands, hemmed by vertical, corrugated screens. “While we’re presenting something fresh, we’re very mindful to remain relevant to the island and its culture,” says Gorrow.

SUITES
A standard suite is between $200 and $300 a night. There are no desks or televisions, a strategic move to help people slip into island life. “It’s somewhere you can go, disconnect and reconnect. ‘Get here fast and take it slow’ sums it up,” says Gorrow.

The crowning feature of the pool suite (about $197 per night) is the private garden and plunge pool, flanked by palm trees and a walk-in shower. Inside, sustainable wooden furniture and cane chairs are scattered throughout, with hand-woven baskets and contemporary art. Room 13 features Fountain Bite, an art installation by Fraser Anderson of pigmented polyurethane resin on canvas.

ART
The hotel’s gallery showcases George and Cisco’s private art collection. There are more than 90 pieces, each representing poignant moments in their lives. “Walking through the space feels like walking through a photo album for us,” says Gorrow. One sculpture dominates the room, Garuda of Death Metal by Madsaki. Chris Searl’s raw photographs tower alongside it.

DINING
At its core is The Slow’s restaurant, Eat & Drink. Shannon Moran is the head chef – he’s worked at Damien Hirst’s Pharmacy in London, as well as Nobu, and Nahm Bangkok (with David Thompson). “I am lucky enough to have delved into Indonesian, Bhutanese, Indian (southern and northern) and Maldivian flavours,” Moran says. The seasonal menu turns its back on trends. “Food was one of the highest priorities for us to get right,” says Gorrow. “It had to match the concept.” There are pastries and burrata tartines with guava jam in the morning and drunkard noodles with tiger shrimps alongside charred market fish for lunch and dinner. Kebunya – a farm co-owned by Gorrow, which uses the principles of permaculture – provides some of the produce used.

What’s next? “For the moment, the rains have stopped, the season is looking great so it’s time to stop working and enjoy the island,” Gorrow says.