Inside the costume department of Opera Australia. 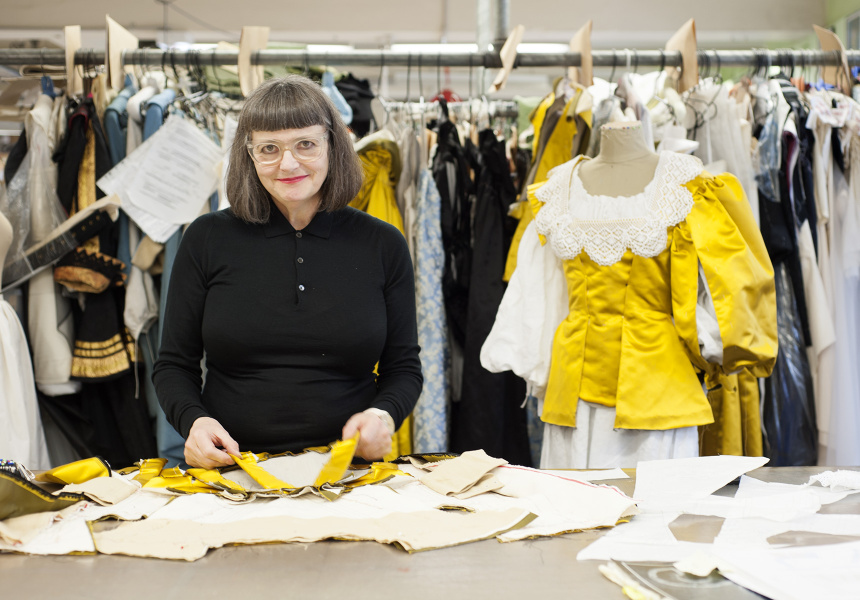 Walking into the costume department of Opera Australia is like taking a step back in time. The traffic from Elizabeth Street is silenced by the continuous whirr of industrial Singer sewing machines. Low-hanging fluorescent lights and rows of workbenches line the bottom level of the warehouse, at which more than 40 seamstresses, pattern cutters and milliners are working busily on the costumes for the upcoming Mozart comedy, The Marriage of Figaro.

The old printing factory turned Opera Australia workshop is strewn with rolls of fabric, half-dressed mannequins and clothing racks of partially sewn corsets and undergarments; the unfinished pieces of a vision still in production. At the helm of this project is British costume and set designer Jenny Tiramani, an expert on historical-period clothing.

Petite, her hair cut in a chic grey bob and wearing all black except for a pair of tartan knee high socks, Tiramani says, “It's almost impossible to be authentic,” as her hands move skilfully to fold a section of lace, pausing to push up her oversized, clear-framed glasses as they fall to her nose.

For this season’s production of the Marriage of Figaro, the story has been set in mid-17th-century Italy. The household, as did all during the Renaissance period, maintained a strong hierarchy and it is the costumes that reflect these differences in class onstage.

“It’s about knowing how to put the right sort of people in the right sort of fabrics,” says Tiramani. For this production that means silk for the count and countess, with the servants in cuts of wool or linen.

Tiramani’s practice relies on research. She does not sketch her costume designs, but rather sources information on surviving clothes, portraits, paintings and sculptures from the period. “I want the makers to interpret from the real thing,” she says.

For the Opera Australia costume team this has been a new challenge. It has been working since February on close to 70 costumes for the production.

“Costumes can take anywhere between two hours for an apron, to 200 hours for an elaborate dress with a petticoat,” says Heal.

These labour-intensive designs mean that the costume department never throws anything away.

“Costumes for more than 90 productions are stored in Blacktown in large crates for all the revival productions, and are used in rehearsals or put through the dye pot and used to dress the chorus,” says Heal.

Similarly, all costume wigs are re-fronted and reused from show to show. The wigs themselves are made from human hair imported from Germany (you can’t buy human hair in Australia). Upstairs in the wig department, the individual ponytails are stored in labelled drawers.

“It takes five days to make one wig. Hair colours are mixed together and the makers sit at a table knotting each individual hair through a foundation net measured to fit the performers’ hairline,” says Heal.

The wig department itself is reminiscent of a bizarre sci-fi production line. Beards, moustaches and chest hair made from the imported hair are lying around the room, along with shelves of labelled stands padded out with cork. There’s also a hairdressing salon set up for styling, the disembodied hair curled and primped on a stand that rotates.

The costume department will work up to 10 months ahead of each show, and in this case, even Tiramani is making a principal’s coat at home in her apartment. “I want them (the principals) to look in the mirror before they go onstage and see a person that they’re playing, a character – it’s to help them and it’s to help tell the story well.”

The Marriage of Figaro opens August 6.