Sydney's Secret Garden festival has grown to become one of the Sydney’s most sought-after tickets. We chat to the founders to find out how it all came about. 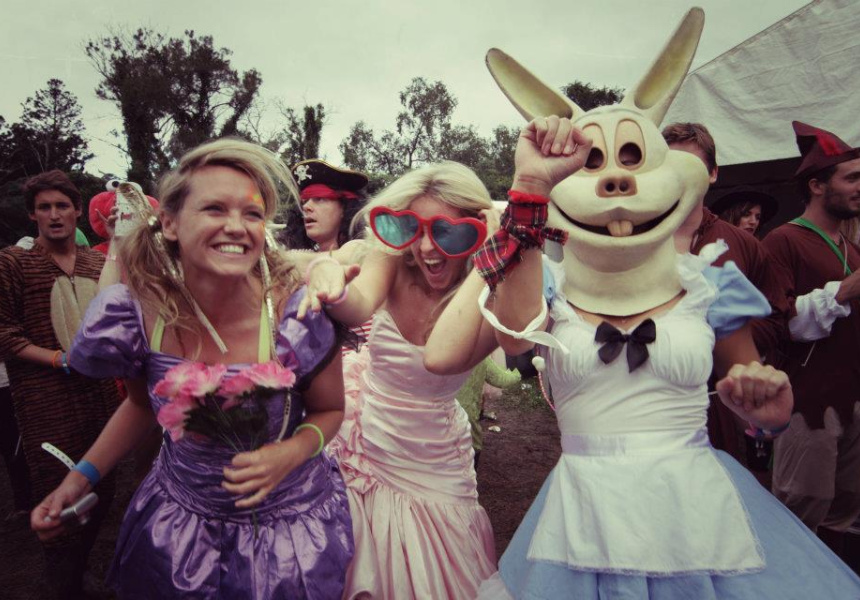 There’s not a lot of neon at Secret Garden festival, which in its fifth year has not-so-gradually blossomed from a private event on a dairy farm into a full-scale operation. Along with the lack of typical fluoro festival-wear, there aren’t a lot of fist-pumping jerks either. What there are, are wings – tousled pink flamingos, winged Snugglepots and Cuddlepies and winged Native Americans. There are wings on people and things that aren’t meant to be winged at all, but that’s just the charm of Secret Garden. After a few years’ attendance, you begin to expect the unexpected, like the sight of oversized crayons dancing in a circle, or an eerie crepe-paper jellyfish floating through the crowd, propelled by an umbrella.

The completely not-for-profit and almost entirely volunteer-run event was founded in response to one of festival director Clare Downes’ oldest friends, Sarah Hilt, contracting meningococcal at age 18. The disease resulted in the loss of 60 per cent of Hilt’s skin, both legs, her left arm, all her fingers on her right arm and one of her kidneys. So Downes and her close friend Matt Emsell organised and threw the first Secret Garden Festival in 2009 as a fundraising exercise for Hilt and other meningococcal sufferers, with 500 friends.

“It’s pretty surprising that we actually pulled it off,” says Downes when reflecting on that first foray into festival management. “We really were against all the odds and everyone was just pulling together. No one really had any idea what we were doing.” It’s been a steep learning curve since. These days, the festival’s ticket allocation is sold out even before a whisper of a musical line-up is revealed.

“Our marketing strategy is no marketing strategy,” says Downes, and the system of Chinese whispers seems to be working. But what does a ticket to this festival in the woods get the average punter, who has scrambled her way to the front of a virtual ticket booth to snag herself a pass?

“The music is just a nice accompaniment to the overall experience of the weekend. There's so much randomness and creativity and colour around you all the time – it's quite easy to totally forget that there are also stages with scheduled things going on,” says Secret Garden’s bookings manager Duncan Byrne.

Each corner of the property is sculpted into an experience for the festival-goer. “People love to participate, not just spectate. That’s what I’m passionate about,” says Downes. Years gone by have seen black and white films screened at midnight in a clearing, a vaudeville-esque labyrinth of alcoves strung together to create a red-light district maze, a flash mob dedicated to the late Whitney Houston, pint-sized Olympics and other nooks and crannies planned out down to the smallest detail, none revealed until the gates swing open to ticket-holders.

But planning can only get you so far. In the midst of 2012’s early autumn deluge of rain, the team were quite literally stuck in the mud. Bands cancelled, the majority of the site was either closed or submerged under three feet of mud and crew frustration. Still, the show went on, but nowhere near to the scale that had been meticulously designed six months in advance.

So this year? “We just want to deliver what we promised – and better,” says Downes. “And to be honest, I’m glad we went through it, it was easily the best thing that has happened to us. From that moment on, it changed how we plan the festival and how we look at it.”

So for a weekend-long festival that doesn’t rely on huge-name bands to push ticket sales, the scope for curating a line-up is a little more flexible. “I try to book bands that I know will appreciate the vibe, who don't take themselves too seriously and don't mind if I hug them at 3am when it's time to let your hair down a bit,” says Byrne. Matt Corby has played numerous sets on the main stage, and Secret Garden’s typical mix of indie, acoustic and DJ sets hasn’t failed to deliver this year, “Elton John would also be cool though,” says Byrne with a chuckle. With that in mind, we’re researching flamingo costumes and expecting the unexpected.

Secret Garden Festival 2013
March 8–9
Secret location an hour from Sydney
Beer and wine are complimentary on Saturday
Tickets to the 2013 festival are now sold out
secretgardenfestival.com.au
sarahhiltfoundation.org.au