Sculptures Swallowed by the Sea

A huge south swell has combined with a high tide to wreak havoc in Bondi. "Fair Dinkum Offshore Processing" by Bronek Kozka before it was damaged. 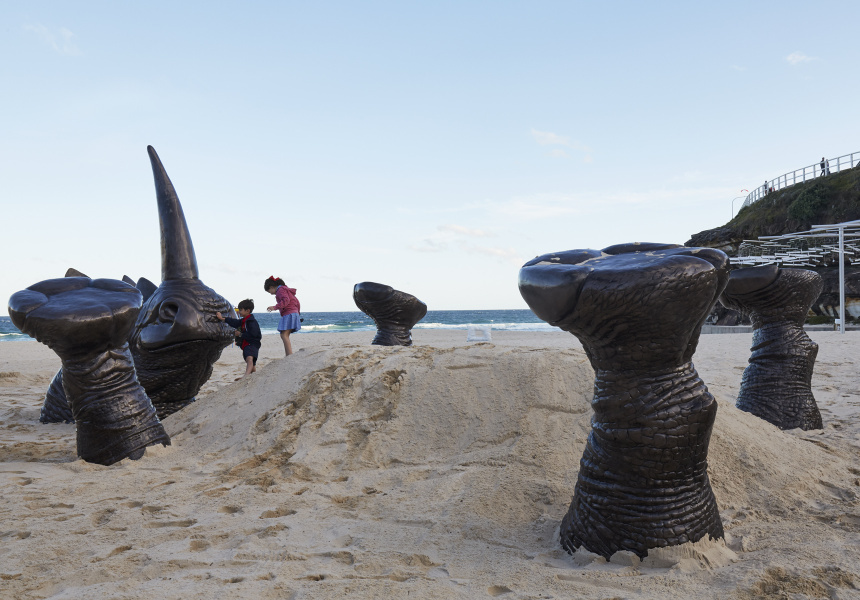 During its 20 years, Bondi’s Sculpture By The Sea has never experienced the unforgiving might of the ocean to the extent it did yesterday. Five sculptures were either seriously and irreparably damaged, or swept out to sea.

It was one of the most politically charged pieces that bore the full brunt of the strong swell. Bronek Kozka, a photographer and lecturer at RMIT University in Melbourne, was midway through a class when he heard his Fair Dinkum Offshore Processing installation had been dismantled by the waves. The sculpture – an aluminium and steel cage featuring steel silhouettes of refugees, which was designed to rust as a result of the harsh coastal conditions – was lifted from its boardwalk position and thrust onto the sand in a heap.

German artist Angelika Summa’s sculpture Alien: Self-Consciousness is a Virus from Outer Space, which was perched on the Mackenzies Bay-to-Tamarama stretch, was also swallowed by the ocean yesterday. It was retrieved from the rocks below its original position this morning and is currently being moved to a safer spot.

Three other sculptures, by artists Anne Levich, Elyssa Sykes-Smith and Sang Sug Kim, have been damaged. The latter is being repositioned.

This level of devastation to artworks had not been seen since the 1998 exhibition, during which two sculptures were damaged by waves.

While the freak tidal conditions have now calmed, meteorologists expect more huge swells to pummel the NSW coastline today and have advised locals not to fish, swim, surf or rock climb until the surge has passed.

Organisers of Sculpture By The Sea have assured patrons the exhibition is open to the public today.