The winners of the 2017 Redlands Konica Minolta art prize have been announced. 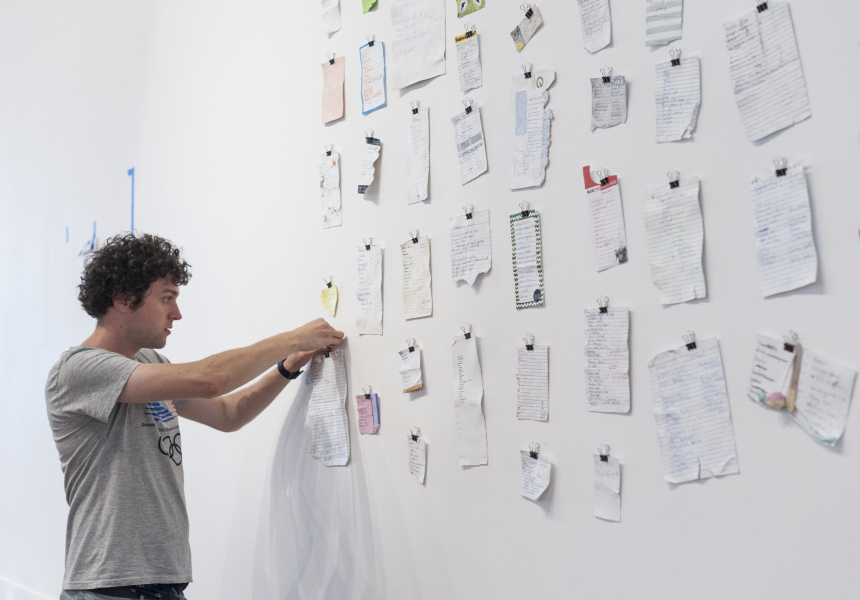 Next time you’re done with a shopping list you should think twice before throwing it out. Your reminders to buy bread, milk and loo paper are rubbish to you, but to artist Kenny Pittock they represent something important.

Pittock’s work is a series of ceramic reproductions of abandoned shopping lists he picked up over one weekend while working in the dairy aisle of his local supermarket. The lists range from meticulously typed columns to hastily scribbled items on the back of an envelope and a beautifully executed list written in Japanese. They are surprisingly heart warming.

“The manager told me that milk is generally the last thing a shopper will get before leaving the store and so it’s also the place they abandon their shopping lists,” Pittock says. “Each shopping list functions as both a poem and a portrait, offering a glimpse into the people we pass in the supermarket.”

This is the first time Alice Springs-born Georgetti has entered an art competition, despite being a significant figure in contemporary Australian art since the late 1980s. One of the judges, Art Gallery of NSW head of international art Justin Paton, described her winning work as “exceptionally well made, reprising and reimagining a century-long history of abstract painting on new terms”.

The curator of the Redlands Konica Minolta prize this year was former Venice Biennale artist Callum Morton (the curator is always a former winner). The curator selects 20 established artists to participate, who in turn invite an emerging artist to exhibit. Morton had three criteria when curating: invite artists who hadn’t taken part in the show before; choose artists who have a direct relationship with the next generation; and have a quota to guarantee diversity across gender and race.

Morton is also the first curator to include artist collectives, an acknowledgement of how important these groups are. Barbara Cleveland (a collective previously called Brown Council) was one of them. A group of four female artists, the collective works in live and filmed performance exploring alternative interpretations of history.

“It’s about time collectives are given the same opportunities as solo artists,” says Barbara Cleveland founding member Kate Blackmore, whose work with the collective is currently on display at the AGNSW and who has previously been commissioned by the Biennale of Sydney and the Museum of Contemporary Art. Other collectives include DAMP, Pitcha Makin Fellas and Get To Work.

“It’s a really interesting concept because it kind of curates itself,” says Blackmore. “The established artists Callum selects undermine the curatorial vision by selecting the emerging artists, so it creates this really beautiful organic exhibition that’s also a map of the network of artists and their relationships to others. I have no idea who half the emerging artists are and that’s so exciting.”

The 2017 Redlands Konica Minolta Art Prize is on display at the National Art School until May 20. Entry is free. Barbara Cleveland will curate NAS-Nights on Thursday April 6 from 6pm–9pm.