Redfern Biennale is a display of defiance and ephemera. With no rules, no council permission and a housing commission block as its gallery, it’s a delightful if deliberately disconcerting exhibition. 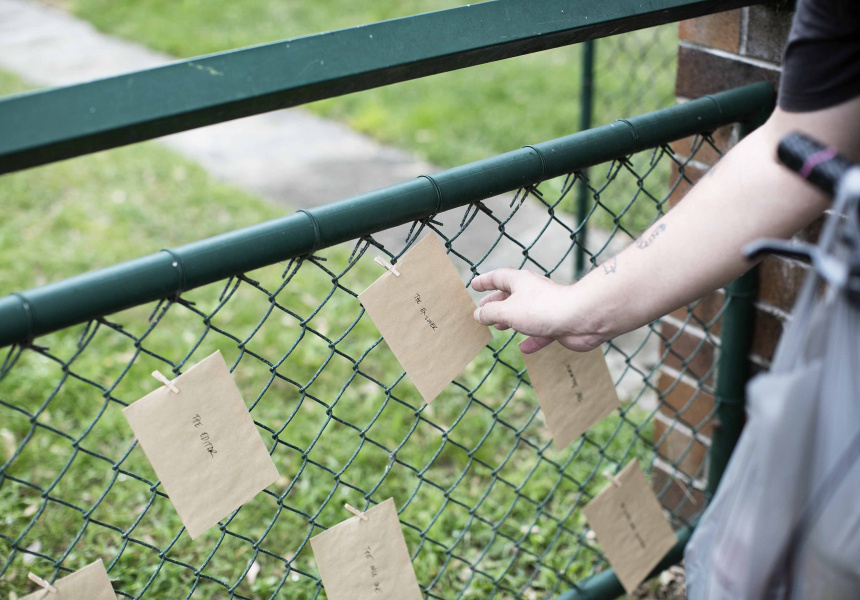 “The ex-lover? Forget her. She’s dead to me,” says a man who stopped his bike in front of a line of envelopes attached to a fence on Redfern’s Walker Street. He reached for a different one. He opened it and looked at the pattern on the reverse side of the note. “It looks like a car ran over a pigeon.”

The artwork is Notes to Self by Sasanki Tennakoon. It consisted of short letters to people in the artist’s life, pegged to the fence of housing commission flats during last Saturday’s Redfern Biennale 2015. The notes are short but poignant messages to people as diverse as “The Popstar”, “The First Boyfriend” and of course, “The Ex-Lover”.

This was one of many reactions to the biennale, which is part of Art Month. It wasn’t located in any of the cool bars, cafes and shops that are now typical in Redfern – where one would expect an art event to be. This part of Redfern is yet to be gentrified; the housing commissions, like the one above, are part of what defined Redfern for so long.

Setting an art event in the open air is unusual; artists must accept that any art will be prodded, poked, picked at and likely poached by the end of the day. Perhaps the point is that art belongs everywhere, and the interactions with the artworks become part of the exhibition.

The renegade festival has absolutely no sense of fixity or commerce to it. Art works are made of found objects; a reading room is set up on the footpath inviting you to take a book; zines are collected from a tree; a naked (invisible) woman dances on a street corner; a table offering free ferns is ransacked by the middle of the day (apparently they were marigolds rather than ferns). “Eternity” is spelled out in bottle caps – and speaking to the digital permanence of ephemera, a step ladder is set up in front of it, so you can Instagram it from above. That’s #art that anyone can access.

Amusingly, a sign marking a reserved parking space for Tony Abbott remained free for the entire day. Its creator, Catherine Smash, claimed to have only put it together that morning with the help of a friend, “the repairer”, who happened to have the wood and stencil required.

Emma Wise’s project The Accommodation Desk engaged with the immediate surrounds. It involved setting up an old desk on a patch of grass from which she conversed with passers-by to learn a few keys facts: How much are/were you paying for your accommodation? Where and what kind of place were/are you living in? And how many hours of work did/does it take to pay your weekly rent or mortgage?

She captured these details in a ledger, and in a voyeuristic turn she re-told the strange and incredible living circumstances she’s recorded in the book. From free rent in New York and exorbitantly priced rooms without windows, to houses bought for a sneeze a few decades ago, it’s a fascinating collection of anecdotes which Wise intends to keep collecting for as long as possible.

Redfern Biennale self-identifies as a festival of “clusterfuck aesthetics”. Even the name is a mindful misnomer, the first Redfern Biennale was held only last year. Art that anyone can participate in clearly doesn't need rules.