Austinmer six piece, Shining Bird, is winning Sydney over with its psychedelic soundtrack for seaside living. 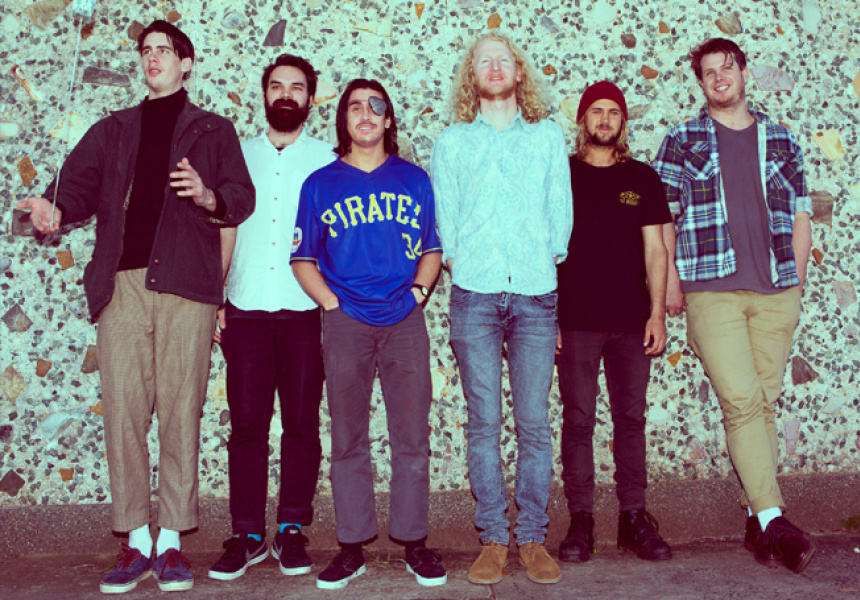 There was a great vibe in the room, says Russell Webster, who plays keys and electronics for Shining Bird. “It was only a couple of days before Christmas and everyone was getting into festive mode. We’d had a couple of drinks beforehand, which we don’t usually do because we need to retain our fine motor skills.” It was so hot on stage, recalls Webster, that his younger brother Alastair, who plays guitar, got down to his boxers. “It was a bit of a spectacle!” he laughs, though spectacle has come to define this band with each inimitable performance.

Shining Bird formed five years ago in Austinmer on the south coast of New South Wales when Webster joined creative forces with Dane Taylor, who would become the band’s lead vocalist. In 2012 the pair released a six-track EP, Shade of the Sea, before working on the debut album Leisure Coast with the help of Webster’s brother, Alastair, on guitar. Shining Bird soon became a six piece with the addition of Nathan Stratton (bass), Riccardo Quirke (drums) and James Kates (percussion). A series of memorable live shows in 2013, including supporting Franz Ferdinand at the Metro, and the aforementioned Oxford Art Factory gig, earned the band a nomination for Best Live Act at the Sydney Music Art & Culture (SMAC) Awards.

“We put a lot of effort into making each live performance different to the last,” says Webster. “There are some fairly loose parts in a lot of the songs, so we get to do a lot of improvisation which keeps it fresh.”

While much of Leisure Coast was recorded at home, two weeks spent at a rented farmhouse near the picturesque south-coast town of Berry yielded the dystopian You Won’t Feel a Thing, an atmospheric track featuring Taylor’s sedated, almost medicated vocals. Australian references feature prominently throughout Leisure Coast, from opening track Terra Nullius to the Ken Done-esque Australiana of the video for Distant Dreaming. Webster acknowledges it was a goal to incorporate Australian culture and history into the album.

Inspiration came from films, books and poetry rather than music. “I was really getting into a lot of Peter Weir’s movies, like The Last Wave and Picnic at Hanging Rock, and the poets Les Murray and Robert Adamson were a big obsession during that time for me,” he says. Shining Bird’s success shows no sign of abating in 2014. The band kicked the year off with a gig at the Sydney Opera House supporting Kurt Vile and the Violators, one of the most anticipated shows of this year’s Sydney Festival. Ongoing support from local radio station FBi and a coveted spot in the Secret Garden festival line-up have assured Shining Bird’s reputation as one of Sydney’s most bright and shiny musical talents.

Shining Bird will play at FBi Social at the Kings Cross Hotel on March 22 to celebrate FBi's 3rd birthday. Tickets are available here.