Need 120 litres of stage blood? How about a three-metre high fibreglass skull or 80 skeletons? Simon Craw, head of props manufacturing for Opera Australia, can make it happen. 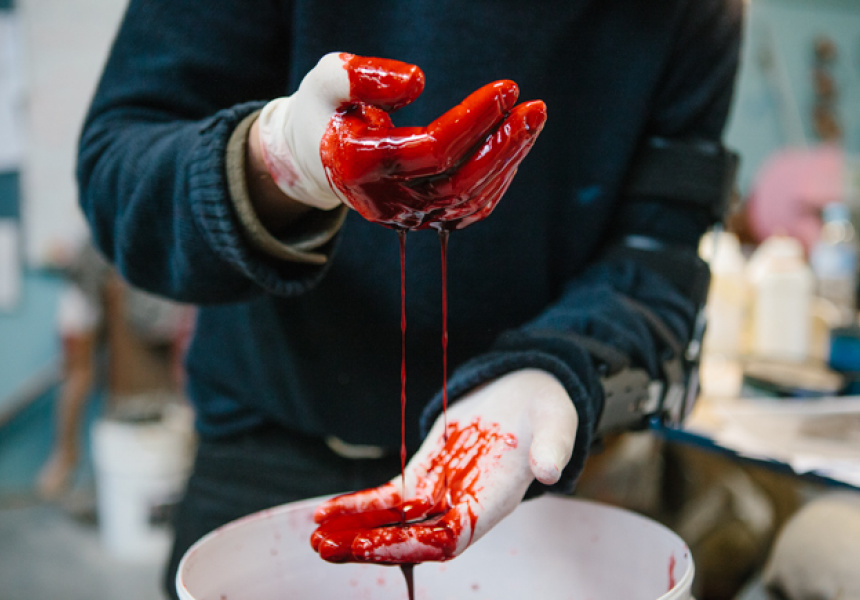 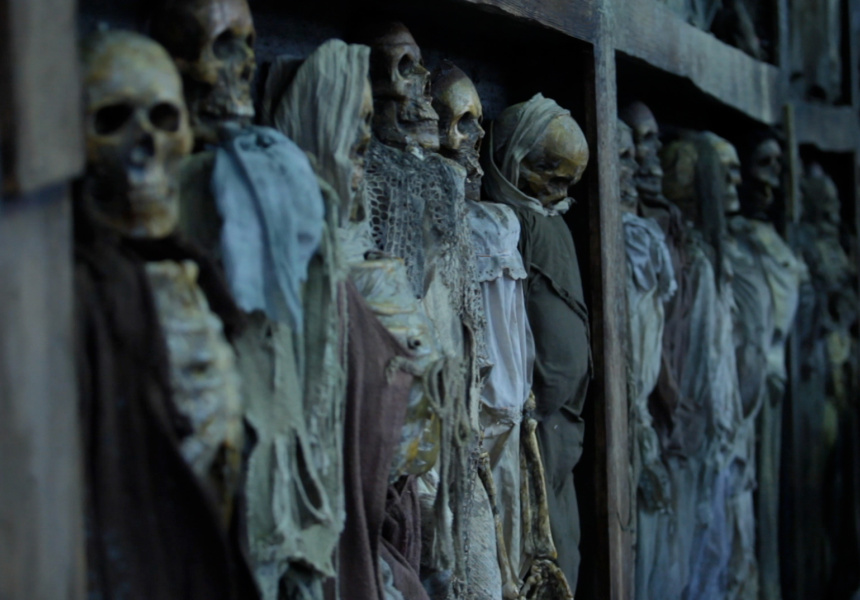 Simon Craw is dripping in blood. Thick, oozy, stomach-churning blood. He’s quite cheerful about the situation. The most pain it will cause him will be when it comes to scrubbing himself clean.

A creative artist and former punk rock singer-songwriter, Craw is the magician behind the extraordinary props and effects that punctuate the stage night after night in Opera Australia’s 170 or so shows a year. Right now he’s overseeing the manufacture of 120 litres of the fake blood for the upcoming world premiere of Verdi’s La Forza del Destino (The Force of Destiny). Craw and his 14-strong team are working around the clock to realise the vision behind young director Tama Matheson’s first main stage production alongside expert designer Mark Thompson, in which 40 litres of blood will pour out of the eye sockets of a giant three-metre skull and a two-metre statue of Jesus. His is not a job for the squeamish.

A creative artist himself, Craw studied fine arts at university, learning bronze casting, painting, printmaking and photography among other disciplines before joining Opera Australia 12 years ago as a casual in the prop hire department. Since then, he’s worked his way up to his role today as head of props manufacturing. The central tenet of his job is translating the often challenging vision of designers and directors to the stage.

And there’s few as challenging as Forza. Set in the mid-18th century, this gothic tale of love, hope, revenge and redemption has been given a particularly dark treatment in Matheson and Thompson’s hands. In addition to the giant polystyrene and fibreglass skull and crucifix, Craw is overseeing the manufacture of a 7.5-metre Madonna, an ossuary wall of 80 full skeletons, 600 resin cast and vac form skulls and 540 battery-operated candles.

As if that wasn’t pressure enough, Forza will play in repertory with Puccini’s Tosca – also a world premiere – being directed by Bell Shakespeare artistic director John Bell. Tosca is an opera of textbook tragic proportions, a heartbreaking story of love and death. As such, it too requires blood, although it’s more the concealed blood pouch type for flesh wound effects than Forza’s gushing variety.

One of the main challenges of these two productions is creating blood that can ooze convincingly, be easily recycled and cleaned up should it spill. “Blood is problematic on the stage because if it gets picked up by costumes and travels around you’ll get blood all over the Opera House and we’d end up with a huge cleaning fee,” says Craw. “One of the first shows I helped build was Sweeney Todd, so that was my introduction to the stage blood we use today – lots of cadavers, sliced throats, bones and body parts.”

The blood recipe belongs to the head of stage props Gerard Foley, the main ingredient being corn syrup (which Foley says is the secret ingredient to excellent pecan pie). Special receptacles have been built behind the giant skull in Forza to trap the blood, which is then decanted into a reservoir under the opera pit and recycled for the next show.

Does he enjoy his job? “Yes!” Craw says, with a somewhat maniacal grin. Nevertheless, it’s a challenging one that is fraught with danger. Take the fibreglassing booth, one of the last of its type to still be used in Australian theatre making. Running full pelt seven days a week, it has highly toxic, explosive elements that demand respectful and careful treatment.

What is the most challenging prop he’s been asked to realise? “It doesn’t really matter,” he says. “You have to take the approach that you can build anything. If you haven’t done it before, you research it or talk to people about how it has been done before.” Often the simplest effect is the hardest to produce. Handel’s Partenope, for example, requires the seemingly simple task of dropping a top hat from a fly baton seven metres above the stage so that it lands upright. Similarly, a knife falling from a grid can provide headaches in ensuring it ends up point-down in the stage. “They’re very simple effects but physics make them hard.”

Following Forza, Craw will return to working on Siegfried from Wagner’s four opera Ring cycle (directed by Neil Armfield), in which Siegfried must reforge the broken Nothung sword. “It will be quite tricky but not impossible and will require many different effects: pyrotechnics, lighting, smoke, sound effects and other special effects to create sparks, flame, steam, molten metal and glowing red hot metal.”

Just another day in the props department. After all, Craw’s job is to make the impossible possible.