Your last chance to see some of Australia's best emerging artists. Tom Polo in front of his winning work (left), All she needs. 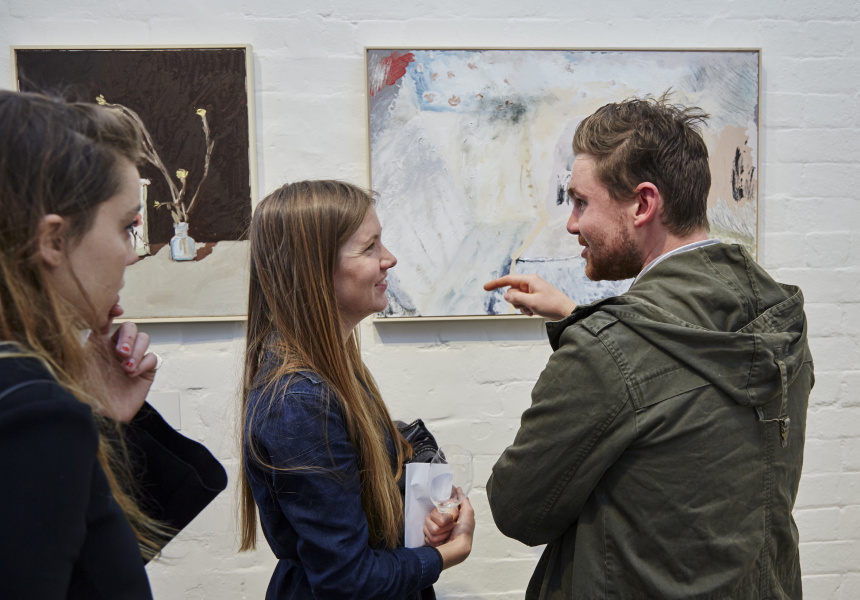 Brett Whiteley was only 20 years old when he won the Italian Travelling Art Scholarship that would go on to have a most profound influence on his life’s work.

Established by Whiteley's mother, the late Beryl Whiteley, the scholarship is open to young Australian painters aged 20-30 and provides the winner with a three-month residency at a studio in Paris in addition to a $30,000 stipend to support living and travel expenses for a further three months’ travel in Europe to enhance their art education and experience. The scholarship was established to acknowledge the significant effect international travel can have on Australia’s geographically isolated young artists.

This year seven finalists were selected from around 80 entries by judges Wayne Tunnicliffe, the Art Gallery of NSW’s head of Australian art; and the 2014 Archibald Prize-winning artist Fiona Lowry, a previous entrant in the Brett Whiteley Travelling Art Scholarship. The judges awarded painter Jordan Richardson a $5,000 highly commended prize.

Lowry praised Polo’s painting for its ability to express both anxiety and failure in a beautiful way. “I’ve watched his work for a long time now and find it fascinating he can convey what he does with such abstraction,” she says.

Polo says he has admired Whiteley's work since high school and notes the scholarship will enable him to absorb the wealth of culture and influence of Paris, and Europe in general.

“I knew of the important influence Brett had on Australian art and younger artists because of the ambition I saw in his work,” Polo says. “Whenever there is support for artists – whether it’s financial or exhibition opportunities – it’s a real privilege. This scholarship means I can afford the time and space to focus on the work and on developing the work.”

Polo currently supports his income as an artist by working as a part-time educator with the Museum of Contemporary Art but says he would like to think his art alone could ultimately support him financially. “I see being an artist as a long-time career and [I hope] the longevity of the work sustains me as an artist.”