The Paranoia of Liars

Liars frontman Angus Andrews speaks to us from LA's Getty Museum about drawing on the creative force of anxiety, and how he's used it in his "reactionary, schizophrenic band." 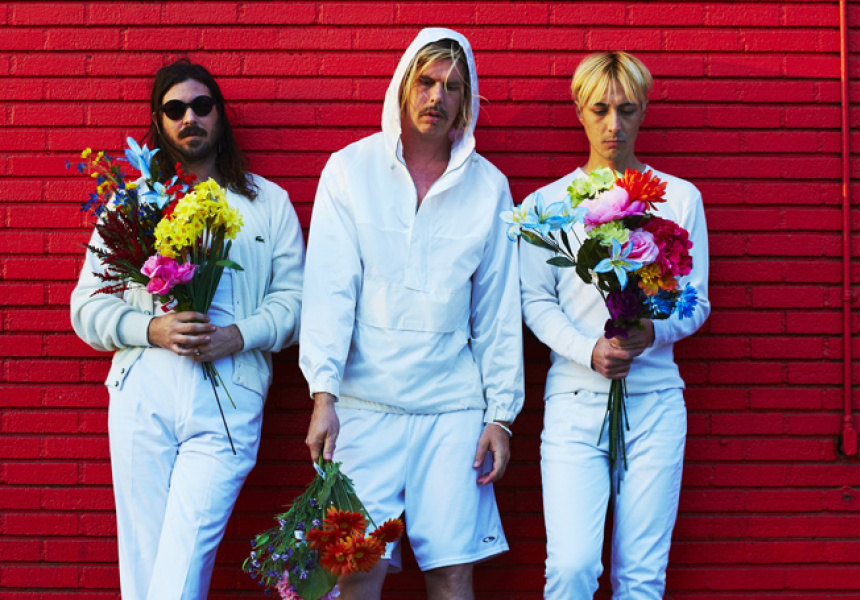 It isn’t easy getting hold of Liars frontman Angus Andrews. When we call he is in the bowels of the Getty Museum in LA, manoeuvring his new installation into place. It’s all part of a Liars takeover of the venue. The regular event titled Friday Flights brings together a network of LA-based musicians, visual artists and creative thinkers for a vibrant evening of sounds and sights. As for the band's contribution; “We’ve basically taken all the furniture out of our house and put it into the museum,” explains Andrews before his phone loses signal.

Liars, the three-piece band based in LA, has built a solid fan base since it dropped its fresh-sounding dance-punk debut album They Threw Us All in a Trench and Stuck a Monument on Top in 2001. “We are a reactionary, or maybe a better word is a schizophrenic band,” says Andrews. In an attempt to avoid them all together, the band has rattled through a number of genre-based pigeonholes since it’s been around. It has been through punk funk, liminal no-wave, ecstatic noise-pop, 21st-century garage rock and post-millennial post-rock and is certainly not a band to rest on its laurels.

“It’s all about keeping it really fresh,” explains Andrews after a quick redial and a re-location to another part of the museum. “I want to be challenged each time I make a record. It’s the search that matters. When I was in art school, and I was listening to bands like Suicide and Sonic Youth, I thought: maybe this is not about technical skill? Maybe this is about an idea. It wasn’t about learning all the notes – it was about trying to express something interesting.”

Liars’ interest in experimentation and the multimedia layering of its music could be attributed to Andrews’ art-school background. Liars’ seventh studio album (which the band is currently touring) is a sonic blast of a record, full of angst, anxiety and paranoia – something Andrews is keen to emphasise.

“Sometimes when you focus in on the issues you have, you get weighed down and wallow in them. This record was the first time I realised that anxiety is actually a positive and creative force.”

There is a playfulness throughout the album which is obvious from the start. Title track Mask Maker commands the listener – a powerful and driving song using distorted vocal effects ("Take my pants off. Use my socks"). As for the live tour, Andrews insists the band is not looking to give a polished performance, but rather to provide an experience. “It’s not all scripted and laid out. It’s not going to sound like the album. Things fall apart and mistakes happen which is all part of the performance.”

As part of the Vivid Sydney Modulations event, Liars is bringing its own brand of primal bursts and ritualistic beats to Australia on June 5, with a performance at The Corner Hotel in Melbourne, followed by another at Carriageworks in Sydney on June 6. Fusing a mixture of both punk rock and electronica, Andrews promises the mental showmanship that has come to be synonymous with the band over its 14-year career.

“There is going to be a lot of energy, some mayhem, a lot of colour; it’s going to be pretty fucking loud!” he bellows, and then the signal cuts out once more. Enough said.