The co-owner of Utopia Goods reveals the effort that goes into making native hand-printed textiles. Ten years ago, Sophie Tatlow and her partner Bruce Slorach – who together run Surry Hills-based design studio, Deuce Design – started talking about the lack of a hand-printed, botanical textile label in Australia.

Influenced by the rich history of textiles overseas, they wanted to contribute to Australia’s emerging decorative arts tradition. “If you look at England, America, the Middle East or Asia, decorative arts is key to cultural identity,” says Tatlow. “Australia is really influenced by Scandinavian aesthetics and block colours. We look to something quite easy – grey, olive and navy linen.”

Utopia Goods’s textiles are a far cry from the influence of Scandi minimalism. Cushions, tablecloths, scarves and oven mitts are covered with romantic renderings of banksias, ferns, waratahs and mottlecah, Tatlow’s favourite type of flowering gum.

After a series of successful pop-ups in Bondi, Paddington and Potts Point, Utopia Goods moved into its permanent home in 2016, a two-storey heritage terrace on Oxford Street. “The store has been revolutionary in changing the business,” says Tatlow. “It has exposed it to a lot of people who wouldn’t have seen us in a studio in Surry Hills.”

Utopia Goods release just two fabric collections each year. “We don’t do fast fashion – or anything fast,” says Tatlow. “Our creative process is much longer than most design studios. It’s all done by hand. There’s not a lot of digital work – and that’s deliberate. We could do it all digitally, but you get a completely different product.”

Developing a print is a roughly 12-month process that involves 50 or more people. The starting point is always a sketch by Slorach, whose completed artworks have appeared in a number of exhibitions, with two more planned this year. “It’s all driven by Bruce’s drawing,” says Tatlow. Production occurs in India, “the best place in the world to print and weave,” she says, and where the fabric is “a crafted, ethical, certified product.”

The new location has seen the shopfront’s clientele expand exponentially. “Surry Hills was dominated by the design sector that we were involved with,” says Tatlow. “We were in a bubble. This is far more diverse. It’s a fantastic thoroughfare of people walking from Bondi to the city.” 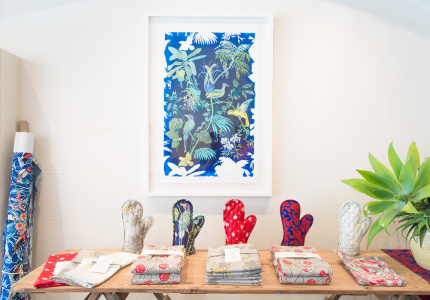