No Limits for Holly Childs

If Holly Childs’ debut novella No Limit were a painting, it would be psychedelic. If it were a song, it would be techno glam-rock. But instead it’s a mind-spinning narrative packed with colour and pop-culture references. 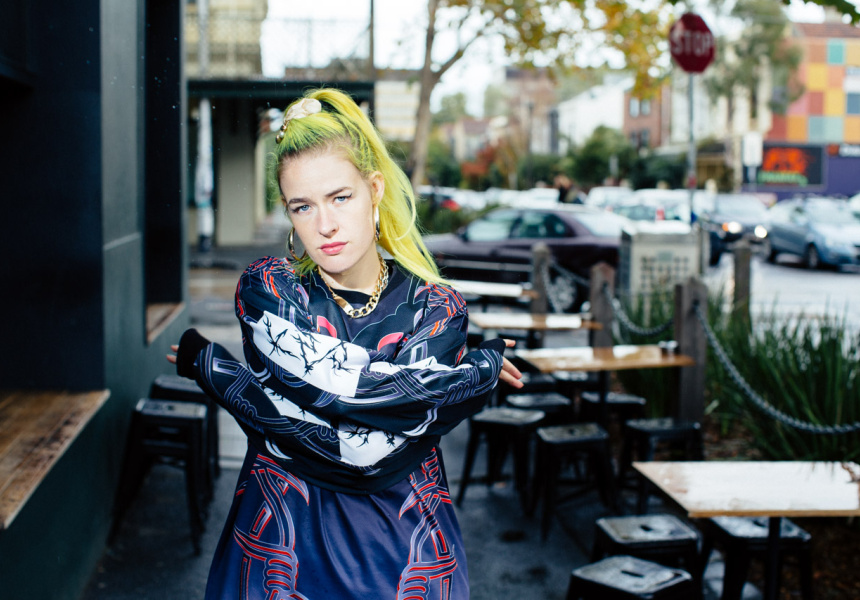 Holly Childs is a writer, the co-editor of Crazy in Love magazine, an artist and a curator. Recently, however, she has focused on her first novella, No Limit. “I see myself predominantly as a writer and since I’ve started thinking of myself in that way my ability to produce has expanded. Before it was spread and my practice was a bit jumbled,” she says.

Her multiple talents are what enabled Childs, 28, to craft a layered text in a relatively slim volume. Each sentence is loaded with evocative visual cues, despite some being only four words long. Her writing is spare yet elaborate, punchy yet gentle – it is a mixture of contradictions.

And so is Childs herself. She dresses in fluorescent hues, sportswear and her hair is canary yellow. To the launch of No Limit she wore a silk and feather dress by James Todorov and platform shoes with socks. In person she is quiet and polite, a contrast to her flamboyant attire. “I’m not that interested in truth or authenticity and I’m quite comfortable embodying and exploring a wide range of subcultural vibes and presentations.”

What makes Childs unique is her ability to combine a vivid imagination that errs on girliness with a much harder edge, one that examines human confusion and the danger of online realities. It is difficult to strike a balance between rainbows, unicorns, rough sex and desperation, but Childs pulls it off. It was during a trip through Paris, New York and Berlin, in transit between strange airports, that the idea for No Limit began to form. “It [the novella] is also about being a young woman and being alone in a foreign country. There are a lot of weird, subconscious cues that you take from different people around you and different situations when you have to assess your safety and comfortability,” she says.

No Limit is one of two novellas published by Hologram, a project run by Express Media that showcases work by Australian writers under 30. This contract gave Childs the opportunity to work with Johannes Jakob, fiction editor at The Lifted Brow. “It was the first time I had worked with an editor who was deeply engaged with my work,” she says. The process wasn’t without challenges, however, and Childs and Jakob collaborated on six drafts of the text. “I was used to working with people who were a little more like: ‘If you want these spelling errors and grammatical atrocities, that’s fine!’”

Initially Childs used Hologram’s submission deadline as an incentive to get words onto the page. Coincidently she had the house to herself for three weeks and spent the entire time writing with intermittent spring-cleaning. It was one major find during this process that proved to be particularly fortuitous. “I discovered a diary 12 hours before I had to submit the manuscript, which put a different strand into the story – it was like a cherry on top,” she says. The experience was rewarding but intense, and left her feeling, “Creatively hung-over and beaten-up.”

More recently, she is writing a book called holy hela (2014), with fellow writer-artist Max Trevor Thomas-Edmond, which she describes as, “A 600-page opus text, which is kind of philosophical and theoretical and highly experimental.” Later in the year she will take up a residency at Centre for Style as a fashion writer.

Because of her background in visual art, Childs once felt like an outsider. She has been pleasantly surprised by the supportive nature of the local literary scene and thinks working out where you fit and finding your creative peers is the key. “I found there is a point when you go from being unknown to being known – it is a line and once you cross it you’ll be integrated into their structures.”

Purchase No Limit online from Hologram Books at hologrambooks.com.au/nolimit