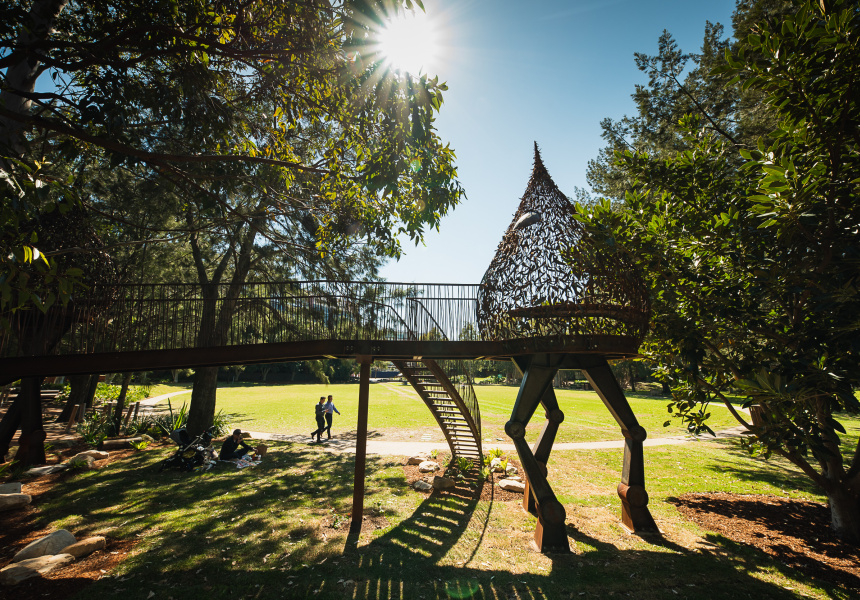 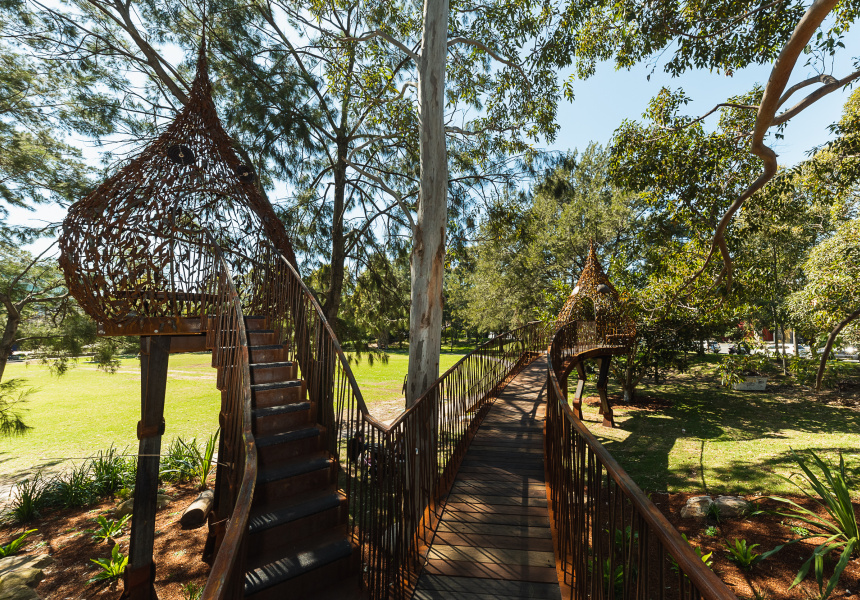 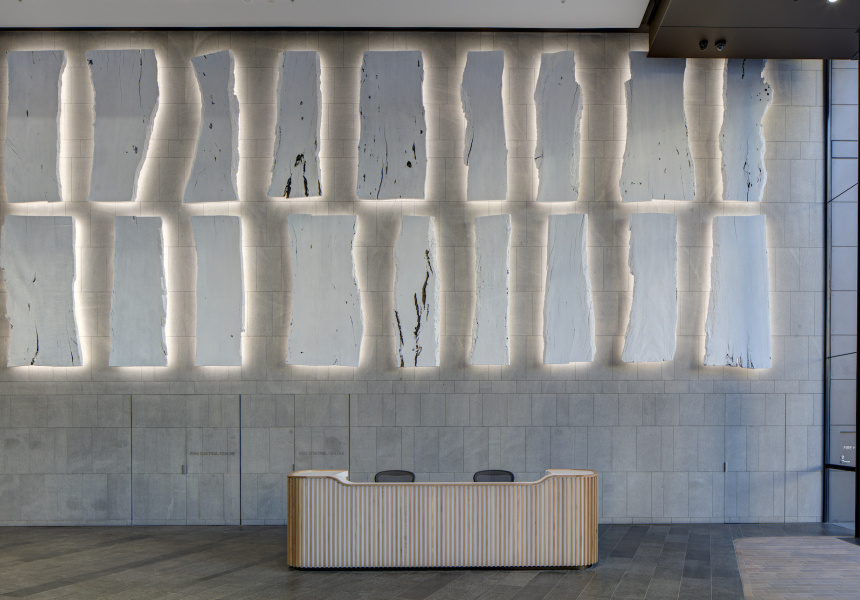 Eveleigh Treehouse is an artist-led architecture project and installation from mononymous Sydney artist Nell in collaboration with design collective Cave Urban. The trees, made from steel from nearby Eveleigh Works (one of the oldest continuing blacksmith sites in the world) and with support from the local community, are designed to resemble the native gum trees in the area.

The art is part of the Mirvac development of the inner-city precinct, which includes Australia’s first Indigenous rooftop garden, and more art commissioned by Daniel Mudie Cunningham, programs director at Carriageworks (on the other side of the rail tracks).

Eveleigh is where Australia’s first steam locomotives were manufactured, and there is evidence of this history in the converted workshops that still remain. Nell (whose wife is restaurateur Kylie Kwong) wanted to blend facets of the area’s industrial history with the park’s natural plant life.

“I took the facade of one of the industrial bays at Carriageworks and used that as the face of the treehouses,” she tells Broadsheet. “These beautiful arched doors became the mouth, and the curved windows became the eyes, forming the character and spirit of the treehouse.”

Nell held 24 community workshops, where over 400 volunteers welded individual metal gum leaves that were eventually used in the structure. “To make the treehouse from many hands and hearts was a really beautiful experience,” she says. “[They] really grew out of the spirit of the place.”

She says there’s something sentimental and almost spiritual about them, given the number of people who volunteered and their activities.

Participants were allowed to write their names and initials on the leaves, and many dedicated them to friends and family who were sick or recently deceased. One large leaf says “Christchurch”, in memory of those who lost their lives in the mass shooting earlier this year.

“It became a beautiful vessel for what’s going on in people’s lives, and a place to channel all that energy,” Nell says. “It’s like a secular gum-leaf temple – I think that’s a beautiful way of describing it.”

Aside from Eveleigh Treehouse, Nell was also commissioned to make art that would hang down one side of Yerrabingin House, which is where the Indigenous rooftop garden and community centre is. Happy Rain will be a large-scale LED light installation, depicting a happy-faced cloud with falling raindrops.

“I wanted to bring something that brought intimacy and humanness to the scale of the building,” she says. “It’s simple and universal. I wanted to make a welcoming face for this community space.”

Other artworks that will live in South Eveleigh include Interchange Pavilion, a sculptural landmark by Chris Fox that references a railroad switch, and untitled (gum slabs) by Wiradjuri and Kamilaroi artist Jonathan Jones. The latter draws on local and state Aboriginal heritage as well as the site’s rail history.

“The coolest thing for me was, when the treehouses were installed, they looked like they’ve always belonged there,” Nell says. “When public art is integrated into a space, it’s very rewarding for everyone involved.”