The large, colourful space is a far cry from the Redfern hole-in-the-wall Myra Perez used to work out of (and live in). 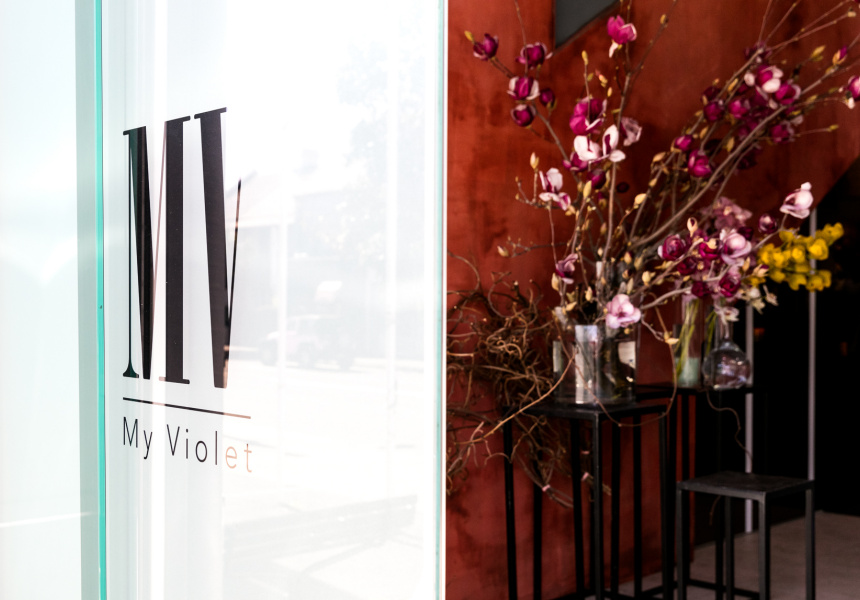 Stepping into My Violet’s new studio in Rosebery, you’re immediately greeted by the smell of fresh flowers and pops of colour from every corner. Blooms of all shapes, sizes and hues fill the space. Far from being dwarfed by the numerous arrangements, owner Myra Perez stands out among it all.

“Not many can say they love going to work, but I feel incredibly lucky to be doing what I love,” she tells Broadsheet.

Perez is the brains and creative soul behind the business, and her influence is everywhere. It’s even in the name, which is a shortened version of her own – Myra Violet.

Her arrangements are bold. She prefers dark and rich tones over pastels, though orchids are her favourite to work with. Branches, fruits and vegetables also occasionally make appearances, lending texture and contrast to the bouquets. There’s less emphasis on ribbons, leaves and other traditional decorative fillers.

“We love flowers, and it shows in how we arrange them,” Perez says. “It’s always been so important to me to let the flower guide you, because your job is to make it shine.”

Her work has graced the covers of magazines and been commissioned for high-profile weddings (including blogger Nicole Warne’s New Zealand nuptials), but it took years of hard work to get to this point.

Perez worked for another florist in the CBD for more than a decade before leaving to start her own venture in 2012. She went around town knocking on doors to introduce herself, and signed up to every bridal fair she could find.

The orders eventually became too much to handle from her south Sydney home, so she and husband Baramet Dejvongsa sold their house to move closer to the city centre. They found a Redfern hole-in-the-wall studio with potential, and they lived out the back while getting on their feet. Dejvongsa built the workbenches and installed the shelving himself.

“My husband has always been my biggest supporter, and was the one to suggest that I start my own business,” Perez says fondly. “We did what we could to make it all happen – to make a dream come true and last.”

Still, the business continued to grow and the space became too small to keep up with orders. Often they would spill out onto the footpath out front. The kitchen and bathroom became makeshift workstations.

After seven years in Redfern, it became clear they needed a bigger space – which is how they ended up in the new Rosebery studio.

“It’s so beautiful and has so much light. We had a vision and knew we’d be spending a lot of time here, so we wanted to make it a comfortable and happy environment,” says Perez.

Aside from the flowers, there are ribbons and craft paper on the shelves, a plush blue couch in the centre, and colourful vases for sale. The high ceiling also allows for a loft, which is installed with tables and chairs for consultations on custom orders.

The wooden workbenches pushed up against the wall give visitors a clear view of Perez’s growing team at work on arrangements and bouquets.

The blooms are sourced from the Sydney Flower Market in Flemington, and different flowers and varieties are available depending on the season.

“There’s no season we don’t like, because each brings a surprise of what’s new,” says Perez. “A wise woman once said to me, ‘A good florist can make something out of nothing’, so really all seasons bring out beautiful options.”