Influenced by bread recipes and nomadic cultures, HOUSE WEAR 2 is an innovative local publication offering unique design and editorial by local creative duo Many Many. We chat to editors Rachel Elliot-Jones and Stephanie Poole about their project. 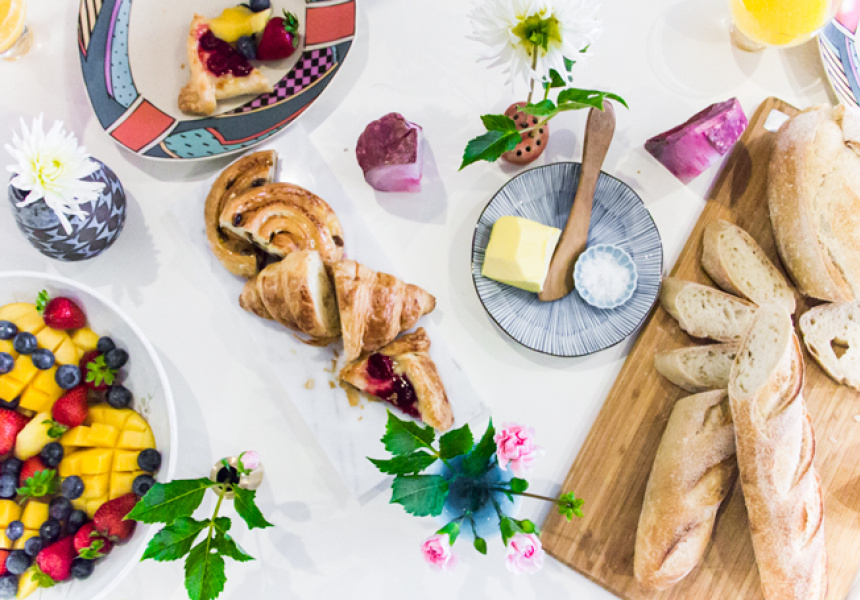 When Stephanie Poole and Rachel Elliot-Jones began collecting and sharing images they had no idea where it would take them. Four years on they have curated an exhibition for the 2011 State of Design Festival, taken part in Bring Your Own Beamer 2013 and produced two issues of their own publication HOUSE WEAR. Released in November 2013, HOUSE WEAR 2 functions as an innovative platform for art, fashion, design and words, providing a curated mood board for the creatively minded.

Editor Elliot-Jones (formerly of The Thousands) and architectural graduate Poole, work full-time in their respective fields leaving only evenings and weekends to work on HOUSE WEAR, so all of the planning, designing, recruiting, compiling and distributing is done in addition to five full a week days at work. This explains the one-year gap between issues. Because they’re both enjoying HOUSE WEAR in addition to their current roles, it seems to be a pattern that’s unlikely to change in the near future.

HOUSE WEAR was born from a need for a creative outlet, something that Poole and Elliot-Jones could utilise to explore concepts and ideas. After seeing patterns in their shared interests they decided to do a project together – their very own creative release. Collaborating under the name, Many Many, the pair applied to the State of Design Festival and were accepted to curate an exhibition at Goodtime Studios in Carlton. The exhibition, which they titled HOUSE WEAR, gave them the opportunity to enlist like-minded artists to explore the theme of nomadic populations and movement; something that they’ve continued to explore in the HOUSE WEAR publication.

The printed HOUSE WEAR is the culmination of influences and new ideas shared by Poole and Elliot-Jones, expressed through their multi-disciplinary, creative collaboration, Many Many. One overarching concept is the process of learning new skills and using them in new contexts. When creating an artwork for Bring Your Own Beamer, Many Many applied the skill of Ikebana, Japanese flower arrangement. They used this skill in a modern context to create “a more freestyle version” of a traditional technique. It’s this approach that Many Many applies to all of its projects, including HOUSE WEAR.

HOUSE WEAR 2 explores themes of “survival, skill sharing and support objects – things that can help us live”. The process of skill sharing and acquisition in the digital age, led Elliot-Jones and Poole to explore the skill of bread making through various “breadsperiments”. After realising that they weren’t that good at making bread, they turned to Baker D. Chirico. The result is a collaboration titled PAIN ET COPAIN, exploring bread as a common, cross-cultural element of food. This explorative process is echoed throughout HOUSE WEAR 2. The local and international contributors, including clothing brand PAGEANT and artist Joe Hamilton, come from a range of disciplines, each approaching and exploring the theme in a different way. There’s an article about nomadic beekeeping, still-life artworks incorporating a collapsible cup and HOUSE WEAR 2 music mixes that can be accessed online.

According to Elliot-Jones, creating an independent publication is “like digging a hole, throwing all your money in it and then setting it on fire – you just have to be comfortable with that”. The publication is, for the most part, entirely self-funded – a testament to Elliot-Jones and Poole’s dedication to what they’re doing. They didn’t want to rely on advertisers, instead preferring to only feature advertising that would reflect the aesthetic of the publication.

So what’s next for Many Many? While still in the process of distributing HOUSE WEAR 2, Elliot-Jones and Poole are already thinking about their next project. Although nothing is certain, Many Many wants to expand into new areas and mediums, perhaps product design or large-scale built projects. In terms of HOUSE WEAR, Poole says they plan on “evolving and stretching the idea as far as we think it can it go” and producing a third issue when the time is right. In the meantime the girls continue to do “Many many things at once”, exploring, producing and creating.

HOUSE WEAR 2 can be purchased for $20 online from many-many.com.au.