An Exhibition of Three Pioneering Female Artists Opens at the AGNSW

The works of trailblazing 20th-century modernist artists O’Keeffe, Preston and Cossington Smith are as relevant now as ever. 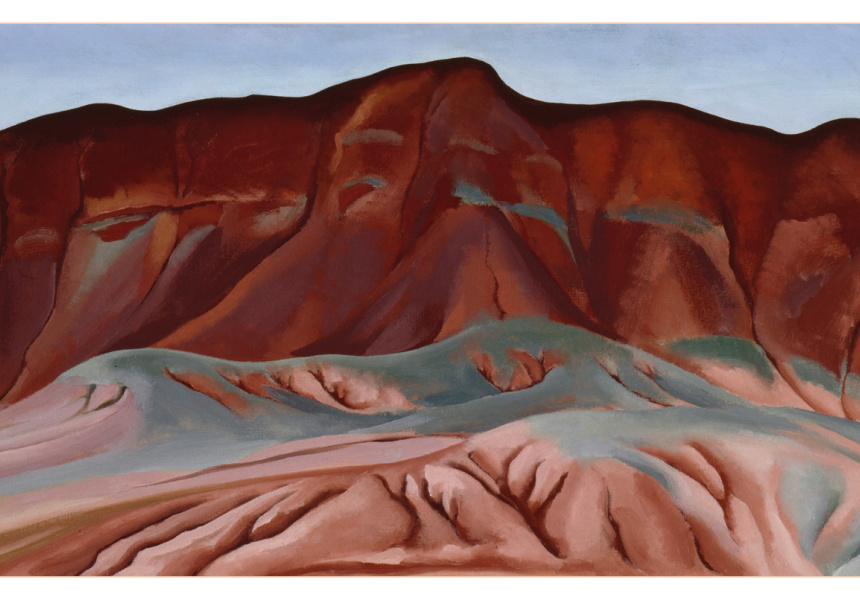 Coffee cups, a garden tap, bleached animal bones. They may not sound like remarkable objects, but with these seemingly mundane items three women defined what it was to be a modernist painter.

Australians Margaret Preston, Grace Cossington Smith and America’s Georgia O’Keeffe may have been painting a century ago, but their works still provoke viewers to question what it means to be a modern painter.

The idea for the exhibition was planted in 2014. The then-curator of Victoria’s Heide Museum of Modern Art approached the Georgia O’Keeffe Museum’s senior director Cody Hartley about an O’Keeffe exhibition that would shed light on Australia’s own modernist artists.

“That led to the broader discussions about the modernistic experiences of both nations, and we had three days of intense discussions looking at 10 different artists’ works,” says Art Gallery of NSW senior curator of Australian art Denise Mimmocchi. “It ultimately came down to these three as the ideas driving their work, and their idea of what modernism was, connected up so well.”

The result is O’Keeffe, Preston, Cossington Smith: making modernism now on display at the AGNSW in collaboration with the Georgia O’Keeffe Museum in Santa Fe, Heide and the Queensland Art Gallery.

The exhibition brings together more than 90 works from the seminal artists, including 30 from the O’Keeffe Museum and 30 paintings from Preston and Cossington Smith respectively, 24 of which are from the AGNSW’s own collection.

“The exhibition presents opportunities to bring fresh perspective to Sydney’s own beloved artists and for the first time presents their work in the international context of the extraordinary work of American modernist Georgia O’Keeffe,” says AGNSW director Michael Brand.

Although none of the artists knew each other, from the early 20th century they all shared a vision of creating a new world that departed significantly from traditional art-making, which they no longer believed was relevant to their time.

Preston (1875–1963) was a Sydney painter – influenced by the Post Impressionism masters – who spent a total 11 years in Paris, Italy and Munich before settling in Mosman. A passionate, vocal woman who regularly published opinion pieces, Preston established a reputation for her highly individualised, modernist still lifes, a sharp detour from her beautiful, saturated coloured flowers.

“Implement blue has a wonderful, streamlined composition that shows an image of something sleek and efficient, yet they’re just humble domestic household objects,” says Mimmocchi of the coffee cups and saucers in the painting. Western Australian gum blossom, transforms a bunch of native flowers into an Art Deco tower. “It says something about the mechanisms of modernity ... that Preston took the tradition of still life painting and really turned it into something distinct and unique to Australia,” she says.

Cossington Smith (1892–1984) was the polar opposite to Preston in personality. She was a magnificent colour painter who worked in relative solitude from her garden studio on Sydney’s upper north shore. She similarly reinvented the still-life genre. Painted in her backyard, Trees is an engaging depiction of a garden scene complete with abstract tennis court and tap, but in what Mimmocchi describes as her “wild and energised” style. “This incredible vision she had in reinterpreting the world around her [shows] the colour and pulsating brushwork that became her signature style.”

The curve of the bridge is one of a series of quintessential images of Sydney modernity that established Cossington Smith as an exceptional painter, demanding the viewer look beyond the simple fact of the Sydney Harbour Bridge construction. “Cossington Smith says, if you look at the bridge and only see grey, you’re not looking hard enough. [It’s] deeply thoughtful and conceptually framed in a way that makes [it] utterly modern,” says Georgia O’Keeffe Museum curator Carolyn Kastner.

Across the other side of the world was O’Keeffe (1887–1986), born in Wisconsin to farmer parents who encouraged their daughter to pursue a creative life. Her early painting Blue Line embraced the idea of “the reduction of what you see, launching immediately into abstraction” says Kastner.

Her affair and subsequent lifelong marriage to avant garde New York photographer and gallerist Alfred Stieglitz exposed her to landscape painting at his home in Lake George, yet hers were landscapes of a particularly modern nature. “The abstract expression of Storm Cloud, Lake George, 1923 displays her signature style where every line takes you into the drama of the storm [yet] without many colours,” Kastner says. Purple Hills Ghost Ranch and Ram’s Head, Blue Morning Glory were painted at her second home in New Mexico, precipitating a change in artistic direction and the second wave of American modernism.

Hartley says the artists are as relevant now as they ever were. “[Just as] there’s strong interest in young artists today in making their own world, these were three artists who said, ‘I understand what’s been given to me [but] I want to do something different.’ These three in their own way had the courage to trust their convictions, understand the past but not be restrained by it. That’s a rebellious act.”

O’Keeffe, Preston, Cossington Smith: making modernism is on at the AGNSW until October 2.