What do we look like when we think no-one’s watching? Photographer Jon Frank is trying to show us. 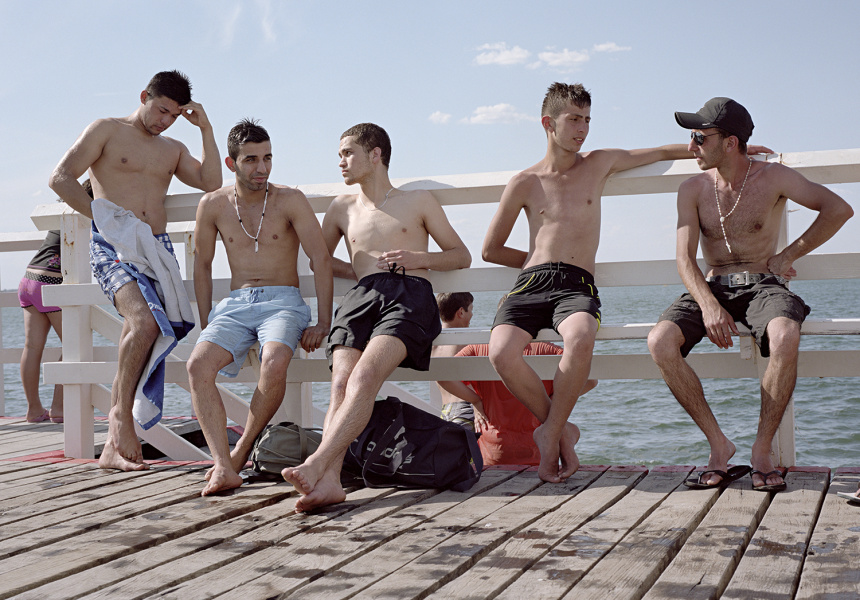 “Even standing in the street, there will be a point in time when a person becomes less aware of what’s around them and goes into themselves. That’s the moment I’m looking for.”

Jon Frank is talking about the photos he’s been taking recently, about walking through cities and towns, waiting for a certain type of character to appear. These photos have been driving him across the country looking at us – all of us – for a new book that tries to capture what it now means to live in the lucky country.

It’s not pushing the boat out to call Frank one the best Australian photographers you’ve never heard of. Unless you have heard of him, in which case you wouldn’t call him that, you’d just call him one of our best photographers.

First coming to prominence shooting surfers in the 1990s, Frank’s work for Waves magazine made it one of the most interesting, beautiful surf magazines of the time.

As is too often the case for surf photographers, it was only when Frank trained his lens on subjects that non-surfers could relate to that his photos found widespread acclaim, and last year he came second in the prestigious Moran Portrait Prize (for a shot that, ironically enough, ended up on the cover of Great Ocean Quarterly magazine).

With the prize money, Frank immediately started work on a book. “Even though I had pretty horrendous credit card debits and bills to pay, I promised myself I’d put the money toward something worthwhile,” he says.

That something worthwhile is The Australians, for which Frank is currently travelling the country to, as he dryly puts it, “annoy people in the street."

“The book title, it’s pretty grandiose, almost arrogant, so you need to take that with a grain of salt because I can’t represent every Australian,” he says. “But people have been surprising me with how interesting they are. I find everyone, in their own way, has something to give.”

The Australians will be made up of candid street photography, captured on a range of film cameras. It’s a style Frank has been experimenting with over two decades of travelling, but never been able to focus on. “The travelling I’ve done has been facilitated by surf trips, which has been my job, but there’s always a day or two where there are no waves,” he says. “In those times I like to walk around with a camera, a roll of film and one lens and shoot what I see.”

How he takes these photos, and the type of images he’s looking for, are things he spends a lot of time thinking about.

“I don’t sneak around trying to grab moments off people. My cameras aren’t small and it’s quite obvious I’m a photographer,” he explains. “But if you wait, people forget you’re there and that’s when you can pounce – when they drift off. Sometimes you have to hold your camera for quite a while and wait for the moment,” he continues. “I’m not trying to use light to create drama or contrast or beauty. I’m trying to stay away from the trickery you can use as a photographer, and get a bit deeper. It might end up looking like anyone could have taken these pictures, but for me it’s a next step, to get away from the obvious. Mark Namath called it the war against clichés, so I’ll run with that.”

Frank is documenting the process of making The Australians on his website, a process that is taking almost as much of his energy as the book. “The blog details everything from inspirations to workflow to the interactions I’ve had,” he says. “I had those initial thoughts of, ‘Oh my God what if people find out I’m human and flawed and failed, and I take bad pictures sometimes.’ But once you decide to go through a process of telling it like it is, which is something you do through a blog, it’s quite liberating."

“Sometimes you can flick through a finished product and take for granted the work that went in to it, but some days I walk around and don’t get into a rhythm or a pattern of producing good pictures. Then sometimes it just unfolds before your eyes, this theatre, this drama that presents itself. I’d like to document that.”

Frank freely acknowledges the self-promotional aspect of a process blog (“it’s a soapbox, and who doesn’t like having a soapbox?”), but with the ability to get his work seen by more people, Frank is mindful of the responsibility to treat that work – and his audience – with respect.

“I take it quite seriously. Even my stupid posts aren’t something I bang out without much thought. It can be frustrating, taking hours over these little stories, picking the photos and going over the words, but I don’t want to put anything out there that’s cheap,” he says. “Just because it’s social media, it doesn’t mean it has to be crass. I try to take care when putting things out into the world.”