Homer Simpson Meets the Ancient Greek Poet Homer at Sydney’s Other Art Fair, in a Playful New Sculpture That’s Like a Meme Come to Life

By European artist collective Cool Shit, it’ll be inflated for its Sydney debut this weekend. (We’re allowed to have two.) Photography: Courtesy of the Other Art Fair / Shey Simon Laplanche
1/3 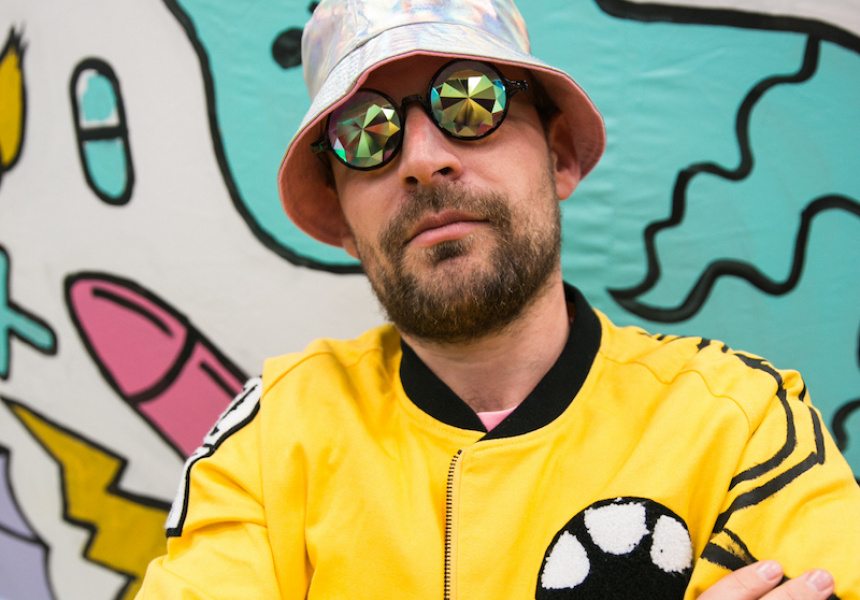 Photography: Courtesy of the Other Art Fair / Brittany "NO FOMO"
1/3 Photography: Courtesy of the Other Art Fair / Clyde Yee
1/3
by Che-Marie Trigg
Share

The Other Art Fair kicks off this Thursday at Barangaroo’s cavernous Cutaway, with 110 emerging artists, live tattooing, a guest appearance by Incubus lead singer and artist Brandon Boyd (via video), interactive digital art – and Homer Homer, a five-metre-tall inflatable head that’s a hybrid of yellow cartoon character Homer Simpson and the ancient Greek author of the Iliad and the Odyssey, the mononymous Homer.

The inflatable sculpture is by European artist collective Cool Shit, which debuted the meme-come-to-life at Sculpture by the Sea Cottesloe just before the pandemic hit in 2020. The group’s work, which is inspired by the internet and popular culture, has appeared around the traps at Coachella, Art Basel and Aussie beaches. It’s superimposed Snoop Dogg’s head onto hot dogs, inserted Dwayne “The Rock” Johnson’s noggin into an enormous colourful rock (The Rock Rock) and placed a sinister-looking, inflatable Nicolas Cage in a jumping castle and titled it Nicolas Cage in a Cage.

“Just like hip-hop, we sample, reference and create familiar juxtapositions as a shortcut to engage with our community,” Cool Shit co-founder Danger Dave (aka Dave Glass) tells Broadsheet. “If you’re walking down the high street in Shoreditch [London] and you’re confronted with a six-metre-tall forest of Snoop Dogg faces superimposed onto hot dogs, you have an instant sense of gratification as you dissect the references and conclude the obvious title of the work – in this case, Snoop Dogg Hot Dogs.

“The Homer Homer sculpture is inspired by Matt Groening’s legendary cartoon, my dad’s unparalleled collection of literature and the beautiful poster by Eike König. It’s a simple juxtaposition with a stunning execution.”

The sculpture, which depicts Homer Simpson’s bulbous yellow head atop the ancient author’s fierce bearded chin, is made from “reams of lightweight fabric and, well, air”, says Danger Dave. “Finally, we focus on the experience... Our goal is to deliver unique and unparalleled encounters through our art.”

Homer Homer – and Cool Shit’s other work – offers an entry into the art world for those who might not usually engage with it or who underestimate their ability to understand it. Like internet memes and humour, it works on multiple levels. You might not be across the millennia-old works of the bearded Homer, but you can still have a giggle over Homer Simpson’s larger-than-life dome.

“Our work connects because it deals with familiar icons in a fun and unexpected way,” says Danger Dave. “We use scale, colour and familiarity as a shortcut to capture the attention of our audience and start a dialogue. We explore themes of positivity and use humour and play as tools for engaging people.”

The Other Art Fair Sydney’s 2021 autumn edition will be held from March 18–21 at Barangaroo Reserve’s The Cutaway.

Broadsheet Sydney reached out for comment from the Other Art Fair regarding claims of plagiarism of Eike König’s work. Its response is below.

“As Cool Shit mentions in the article, Homer Homer is inspired by Eike König's Homer Vs Homer screen print. We hope the sight of an oversized Homer Simpson combined with the bearded chin of the great poet Homer brings joy to people, and that there are soon a few more Eike König prints on the walls of Sydney homes to boot.”