As Alex Seton exhibits at the Sullivan + Strumpf gallery, we pay a visit to the multimedia artist's Enmore studio to discuss his work and the thinking behind it. 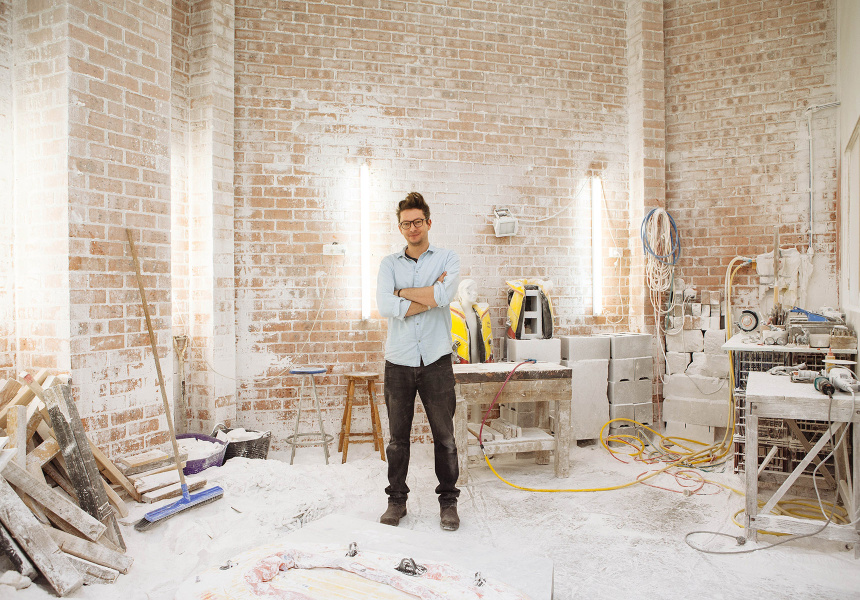 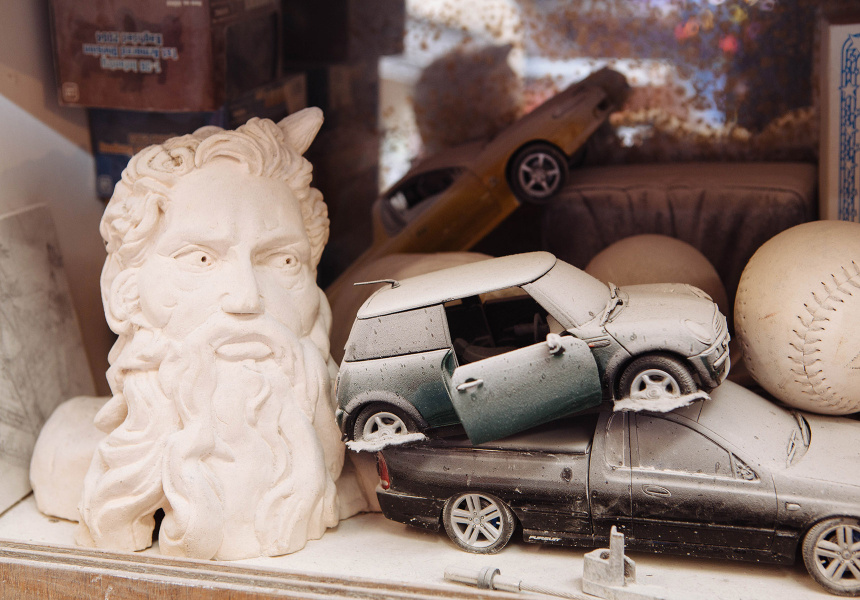 Alex Seton’s Enmore studio is veiled in fine, white, marble dust. A pallet of quarried stone blocks rests in one corner, and assorted carved statuettes sit among tools and carving instruments. In the centre of the room, a pair of large inflatable palm trees are spectacularly arresting. Rendered perfectly in glossy marble, they appear both hefty and buoyant at once – it’s tempting to touch them, to test out the softness of the surface. While the Sydney-based multimedia artist works across video, photography and installation, it is his refined approach to marble that is most remarkable.

Seton’s interest in marble developed from a desire to play with the hierarchy of artistic mediums. “I’d noticed people would be dismissing work because it wasn’t resolved in a particular medium, which I thought was very silly,” he says. “For me it’s about the context, it’s about the ideas.” In a subversive move, Seton decided to explore traditional stone carving as an avenue for expression. “It [marble] is so loaded. It has this monumental history; it goes back to empire, kings and queens. Embracing carving technique in this digital age was a deliberate choice by me.”

Rather than headstones, monuments or brawny god-like figures in draped robes, Seton casts everyday objects in stone, but without rendering them lifeless. His 2009 exhibition, Assembly, was a set of T-shirts made out of subtly dappled Queensland Bianca marble. Each stone fold, crease, pleat and tuck precisely mimicked the look of true fabric. The artist has spent more than a decade honing his skill with the medium. “When you start to indulge a particular studio practice, you start learning the edges of what it can do,” he says. “You learn the constraints of how, when and where that medium is best or most effective to be able to convey an idea.”

Seton is especially interested in using the translucent, weighty beauty of marble as a way of contributing to current social and political dialogue. “Early on in my practice, I realised there is an ability to comment on who we are today,” he says. “Who we are versus what we do and what that says about us going into the future.” In 2012, the Australian War Memorial acquired Seton’s piece, Six more – a set of six folded ceremonial flags in finely carved marble, which represented fallen soldiers in the Afghanistan conflict between May and August 2011. The War Memorial holds the work of other outspoken Australian artistic talent, such as Ben Quilty, Shaun Gladwell, and more recently, Michael Zavros.

At the 2014 Adelaide Biennial, Seton exhibited a major installation entitled Someone died trying to have a life like mine. The work marked the beginnings of Seton’s exploration of the Australian asylum-seeker issue. Twenty-eight lifejackets carved out of Wombeyan marble signified the lifejackets belonging to asylum seekers that had been discovered washed up on Cocos Island off the coast of Western Australia in May 2013. “It was a thought [the exhibition’s title] that came to me every time we were sitting at a table having a discussion about asylum seekers. No matter what the debate raised, or how the discussion went on – that thought kept reoccurring to me,” Seton explains. “It was an act of empathy. A call to empathise with these people, and to remember our privileges.”

Seton’s current exhibition, Refoulement, is a continuation and expansion of those thoughts. The title references a point of international law, which states asylum seekers and refugees should not be forced back to a place where they have a well-founded fear of persecution. In marble, Seton carved palms set upon an island of crumbled stone –an image of paradise, but paradise only for some. “Refoulement, has a question mark attached to it. No matter where you stand on the issue, there is humanity at stake here,” he explains. “The question mark is really: who have we become now? What are we that we so reluctantly extend good faith and the hand of assistance to those who are seeking it?” The exhibition also includes Seton’s lost lifejackets, a deflated raft and paddle – realised perfectly in marble but completely impractical as heavy stone.

“I’m really cautious to claim any moral high ground through the artwork, because all you do is alienate people or preach to a choir, and I’m not interested in doing that,” Seton adds. “I’m simply interested in participating in that dialogue, posing a series of questions but also acknowledging the complexity of the issue.”

Refoulement is at Sullivan + Strumpf until October 11.

Alex Seton will give an artist talk at the gallery on Saturday 27 September at 11am.

Hours
Tues to Sat 10am–5pm
Or by appointment.