A new neighbour has sailed into Redfern and dropped anchor on leafy Bourke Street. 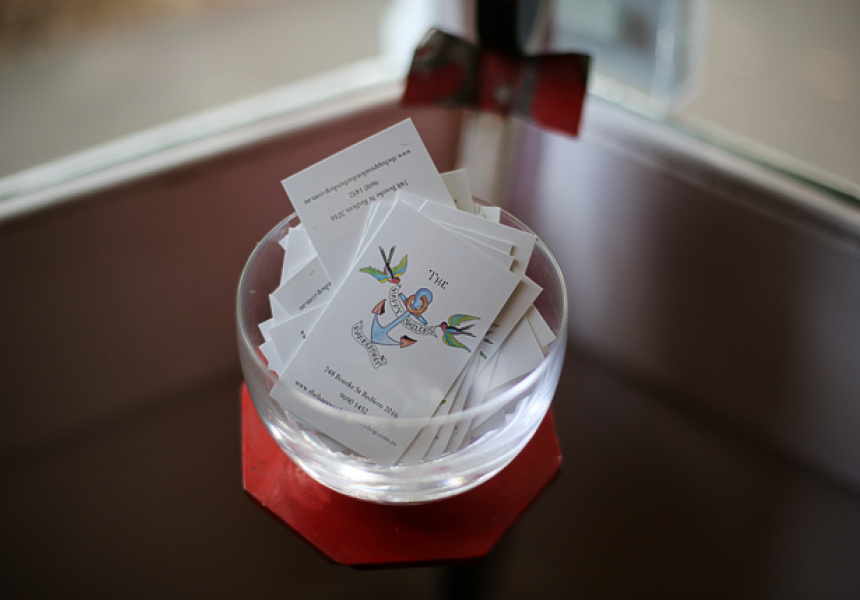 Wander past the two revolving red, white and blue barber’s poles in the front window of The Happy Sailors Barbershop and you’re instantly whisked back to a time when Dean-esque style and Monroe-like glamour was all the rage. Old saloon music echoes in the background and images of 1950s pin-up babes and tattooed muscle men line the walls.

It was owner Nathan Meers’ fascination with tattoos that contributed in part to naming his barbershop. “I saw it [the name] on The Simpsons: it was called The Happy Sailor Tattoo Parlour and I had all the Sailor Jerry tattoos. And the first thing I bought was a boat table…then I just worked around that.”

A man with a love for all things with a sense of history, Meers began collecting vintage furniture five years ago, all with the end goal of opening his own barbershop. Along the way, he’s picked up classic red barber chairs from Melbourne, pre-loved cinema chairs from Manchester, England, retro plastic hair dryers and other bits and pieces purchased on eBay and Gumtree.

“When I left school I just started doing men’s and women’s [hair],” offers Meers on how he started in the trade. Sixteen years on and the Sydney-born craftsman now focuses solely on trimming, combing and neatening up the heads of Sydney’s gents.

Appealing to young dapper gents with old-fashioned haircut requests (think short back and sides with side partings), The Happy Sailors Barbershop gets its fair share of old grandpas, middle-aged guys and kids too. Whether it’s a haircut, buzzcut or moustache maintenance, Meers ensures everyone leaves with a smile. He even sends kids off with some chewing gum from his good old gumball machine.

It’s essentially a gathering place for everyone in the neighbourhood – a space Meers plans to keep nice and simple on his own (with the help of his wife on Saturdays), just like “the old guy down the road who’s been there for over 30 years”.