Fake Cakes and a Photo Series of Every Lockdown Meal: How a Sydney Photographer Kept Creative During Covid

Plus, a growing baking repertoire that includes sourdough and burnt Basque cheesecake, and plans for an exhibition titled “Ultraconvenience”. 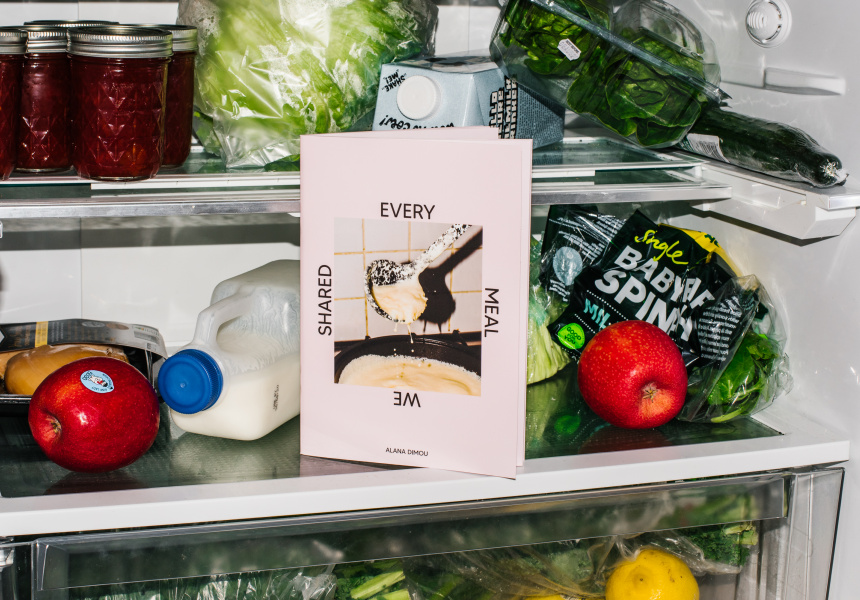 Every Meal We Shared zine The show was to be hosted at Bancho, a Japanese whisky bar in Haymarket, which was fitting because the 12-shot collection was curated from Dimou’s trips to Japan.

A professional photographer specialising in hospitality and food, Dimou is good at capturing subjects in a candid moment. In one photo from the exhibition, diners sit shoulder-to-shoulder at a Tokyo counter, leaning over their portions of the eatery’s only dish: tonkatsu with cabbage, rice and pickles. In another, a drinks vending machine is glimpsed beyond the twisted trunk of a tree along the Philosopher’s Path in Kyoto.

In pandemic times, the photos offer a snapshot of life in the not-too-distant past when Japan was just a 10-hour flight away. What was once ultra-convenient is now temporarily impossible. (Japan hasn’t yet opened its borders to foreign tourists.)

Impossible doesn’t deter Dimou, though. “I remember my last job before the 2020 lockdown was in Bondi,” she says. “Everyone was still on the beach even though there was this foreboding sense that things were going to shut down. After that job, there was no more work. It was five months of silence.” She’s modest, joking that she spent a lot of time playing Nintendo, but the volume and variety of work that came out of that five months is remarkable.

One photo series, Every Meal We Shared, which she turned into a zine, chronicles the favourite meals she and husband Steve Wannet cooked during lockdown. Wannet is a patient hand model, holding a chopstickful of noodles over a bowl of chicken ramen and lifting the royal-blue lid off a cast-iron pan of steaming risoni and mussels.

Then there are the fake cakes. “For many years I’ve been interested in decorating edible cakes. I like the idea of food as decor, but it doesn’t last, so I tried sculpting bright, comical cakes out of air-dry clay. The process was all wrong, though. Clay cracks easily and there are limitations with colour. I started working with foam cake shapes, found materials to mimic butter cream, and I decorated the way you would a normal cake.”

Dimou’s cakes are fanciful and surreal, but still look tasty enough that you wonder if you could pluck a maraschino cherry off the top of the Black Forest cake and pop it in your mouth.

In terms of mental health, sense of self and finances, five months is a long time to go without work. Dimou decided an online print shop was her pivot. She ordered a professional printer and waited. Lockdown ended and work returned. The printer didn’t arrive until Christmas Eve. “I thought I’d sell some prints, have a Christmas sale, but I didn’t get to sell any prints in 2020.”

This year, with an exhibition cancelled, the numbing déjà vu of another lockdown, and the printer gathering dust, Dimou decided to give selling another try. Although she’s “not very salesy”, things are going well.

“It’s so nice to know someone wants a photo that I’ve taken. You have to find a balance of photos you believe in and what will resonate with people, so when someone puts money on that, I feel overwhelmingly grateful.”

In the industry, Dimou’s work is well known. She done campaigns for restaurants, cafes and artist’s studios. Her work has appeared in magazines and websites from Condé Nast Traveller, to Bon Appetit, to Broadsheet. She’s photographed some of Australia’s most celebrated chefs. And yet she’s incredibly humble. The “about” section of her website doesn’t even explicitly say she’s a photographer. The proof is in her work: relaxed but poignant portraits of subjects captured in their element; vibrant close-ups of stacked, syrup-laden pancakes, and fried-chicken burgers with pickles tumbling out of the bun; or scenes that are quintessentially Japan.

The day when Dimou can finally exhibit Ultraconvenience is approaching – it runs from November 16 to December 23. (You can find out more information about it here.) Her photos are also on her website. They’re a way to remember the trips we once took, and to look forward to the places we’ll see again.

“The thought of being in a new place is about as thrilling as it gets for me,” she says. “I want to experience cities and places I’ve never been before, but I’m equally excited to see what’s new and what’s changed in places I’ve already visited.”