Going to the Gallery: How the Art Gallery of NSW Took a Popular Photography Exhibition Online for the Coronavirus Era

Shadow catchers makes us rethink a medium we think we know, just as coronavirus forces us to rethink how we engage with art. 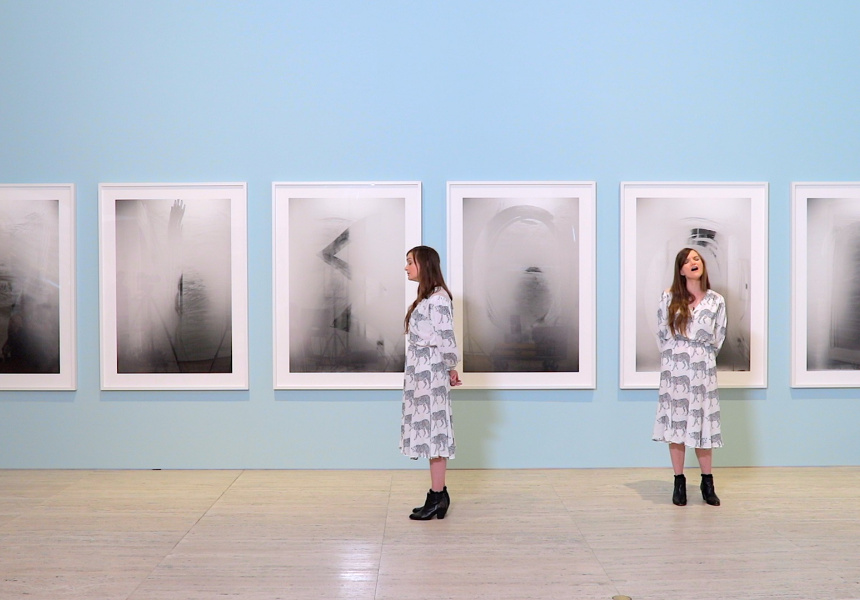 Singer Sarah Belkner performs a vocal improvisation with herself in the exhibition Shadow catchers at the Art Gallery of New South Wales as part of Together In Art. Installation view of Shadow catchers at the Art Gallery of New South Wales with works by Eugenia Raskopoulos from the series Diglossia #1-#8 2009.

Isobel Parker Philip, senior curator of contemporary Australian art at the Art Gallery of New South Wales (AGNSW), admits she was feeling anxious before the February 22 opening of her current exhibition, Shadow catchers.

It isn’t a blockbuster retrospective of a major artist (say Picasso, or Archibald Prize winner Del Kathryn Barton) – it’s Philip’s own exploration of the medium of photography, pulling from AGNSW’s existing collection, as well as new acquisitions and commissions.

She needn’t have worried – within two weeks of opening, Shadow catchers had people talking in the best possible way. “I was really moved by some of the positive responses,” says Philip.

Anyway, it turned out she was about to have something much more serious to worry about: Covid-19. Within weeks, Shadow catchers and the gallery were closed indefinitely.

“We began thinking with a lot of urgency about what it means for the gallery,” says Philip. “How can we remain in meaningful contact with our audience when we’re no longer a place people can come? Physical engagement with an artwork is at the heart of what we do and who we are, so how do we operate when that’s on pause?”

AGNSW director Michael Brand and his management team quickly devised a new project, Together in Art, an evolving, often-interactive daily program that engages with the public and our new reality, offering moments of lighthearted reprieve and interaction.

So far the gallery has announced how-to tutorials led by various artists, including Ben Quilty and Tony Albert; Barton is asking children to respond to the crisis by submitting artworks that will be curated for exhibition; and performers and artists are continually creating new content for viewers online.

In some ways the shutdown has had unforeseen upsides, forcing AGNSW to reconsider its approach to exhibitions. “It’s all unchartered territory, but I think it will foster some really important shifts and let the gallery have a human face of the people who are working and running it,” says Philip. “Now more than ever, that’s important.”

Shadow catchers displays 87 works from the 19th, 20th and 21st centuries, including some of AGNSW’s most important acquisitions by living Australian artists (such as Tracey Moffatt and Eugenia Raskopoulos); works by international artists (such as Spencer Finch and John Stezaker); and works by iconic 20th-century Australian photographers, such as Max Dupain, David Moore and Olive Cotton.

The exhibition looks at the history of photography since its invention in the 19th century, when people were beguiled and confounded by new form.

“There were some beautiful comments made at the time: a photograph ‘is like a shadow you pick up from the ground and put in your pocket’ or ‘a mirror that remains frozen’,” says Philip.

Today, of course, everyone’s a photographer – we carry cameras with us wherever we go, in the form of a smartphone. But the art form still intrigues, and Shadow catchers is a springboard to rediscover a medium we think we know well.

But how to see it now that the gallery is shut?

“Of all shows, this one is really hard to showcase without being in the space,” Philip says, laughing wryly. “It’s been interesting to reconsider how we can unlock the logic of the show.”

In addition to a slideshow of (almost) all the works online, there’s a curatorial walk-through video Philip shot before the gallery closed, and AGNSW has commissioned a suite of musicians to respond to the gallery’s exhibitions and artworks, beginning with Sydney-based singer-songwriter Sarah Belkner. She was allowed into the gallery to film an a cappella performance that uses voice to explore the show’s ideas of doubling, mirroring and shadowing.

An already-planned collaboration with Red Room Poetry will still go ahead – new works by five poets inspired by the exhibition will be turned into a series of audio and video recordings, available on the gallery’s website.

Philip believes art has a crucial role to play in providing a salve and bringing the community together during this time of isolation.

“It offers a moment to pause and remember what is important, whether that’s tenderness, community or the ways we’re connected through similarities across the world. That’s why it’s critical to rethink how we can access that material.”