A George Street of the Future 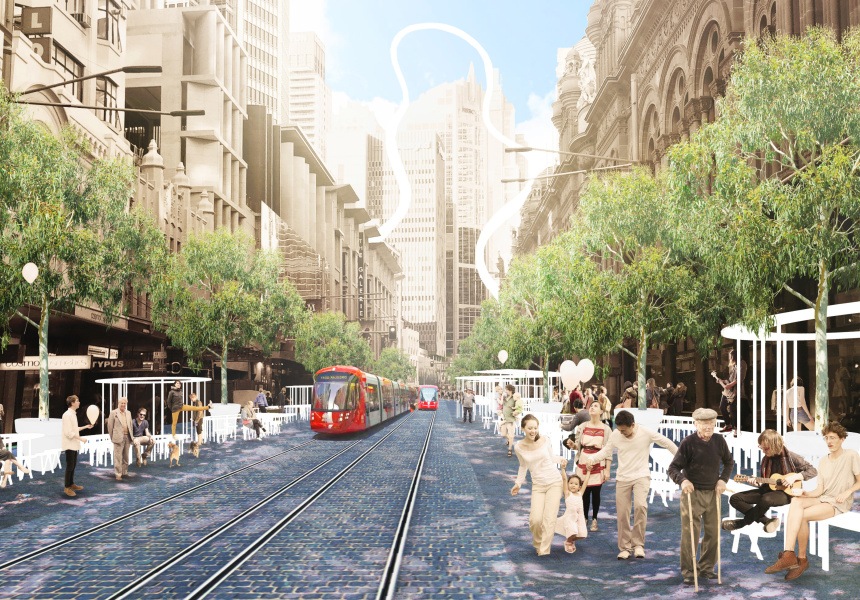 This week, Sydney is dealing with a George Street at the mercy of extensive road closures. Light Rail construction means inevitable traffic nightmares and bus rerouting. Over the long weekend, Sydney Architecture Festival was ablaze with talk of George Street’s potential. The four-day festival launched with an announcement of the three finalists for George Street 2020: Re-imagine Sydney’s main street.

The competition engages teams of young professionals, all under 35, with the challenge of transforming George Street into an entirely new space. The Urban Land Institute, a global non profit for development and leadership, will now provide urban strategy mentors to each team. The winning design will be chosen in early November, and the team will present its ideas at ULI’s 2016 Asia Pacific Summit.

“The Living Room tries to expand the diversity of people that currently activate the city,” Quizon says. “We see the city as targeted towards a very particular kind of age and social demographic group, * The Living Room* is about trying to expand that range to include children and our ageing population.”

After studying architecture at UTS, Quizon began working at CHROFI (known best for its innovative design for The Goods Line). He collaborated on George Street Living Room with Nicola Balch. Their design features a “services carpet”, which a number of accessories could plug into, such as furniture, staging and exercise equipment. This would render the George Street of 2020 a flexible space for public and civil use.

Quizon says, “I think the competition is a really interesting opportunity for a diverse range of voices to provide an alternative to the dominant narrative of the city.”

The winning team for George Street 2020 will be announced in early November.