Richard Roxburgh and Miranda Otto were just a couple of notable names in town for NIDA’s gala dinner over the weekend, raising funds for Australian theatre. 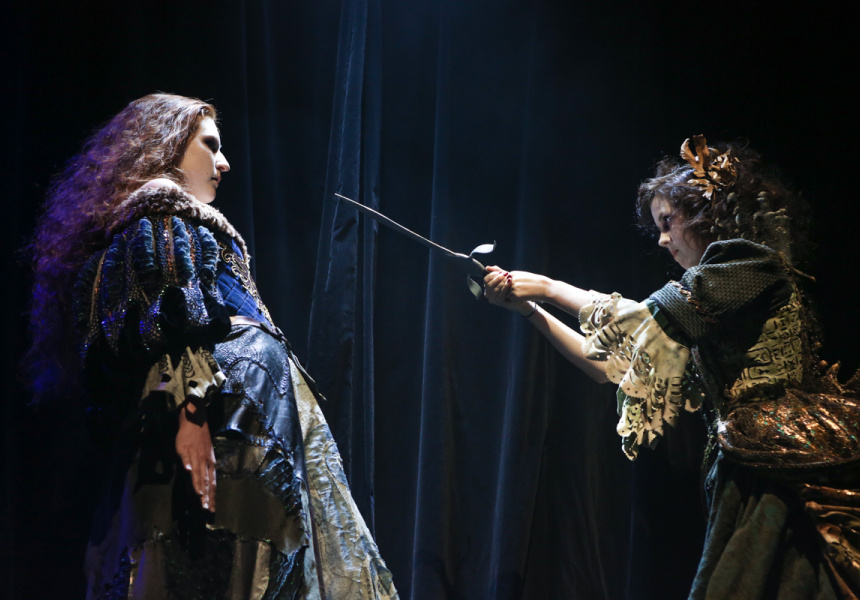 Miranda Otto is enjoying some rare downtime with her daughter Darcey. After landing in Sydney following four months shooting in Los Angeles, Australian actress says she is relishing the role of stay-at-home mum while husband Peter O’Brien rehearses for the Sydney Theatre Company’s upcoming production of Storm Boy.

It’s been a busy few months for Otto, who along with several of Australian film and theatre coterie, attended the National Institute of Dramatic Art’s (NIDA) annual gala fundraising dinner in Sydney on Saturday night. In addition to filming new feature The Homesman in New Mexico opposite Oscar winners Tommy Lee Jones and Hilary Swank, she shot a pilot for a US version of the Richard Roxburgh legal drama-comedy Rake with Greg Kinnear and Australian Bojana Novakovic. The pilot was a hit and she’ll return to LA in late August to begin shooting the season. Then there’s her starring role in the upcoming film I, Frankenstein with Aaron Eckhart, while a smaller but no less impressive film The Art of Losing (in which Otto plays poet Elizabeth Bishop) opens in Brazil in August. And don’t forget The Turning, a series of short film adaptations of Tim Winton’s award-winning short stories that debuts at the Melbourne International Film Festival on August 3.

Otto, a NIDA graduate, seems to have fallen into a purple patch. But she’s not alone.

Not only does the name NIDA still hold as much cache as it did when Blanchett and Roxburgh went through, it continues to play a crucial role in ensuring the future of Australia’s arts and entertainment industry is secure.

If you needed proof of the esteem with which NIDA is still held, you need look no further than the AAA-list group who happily gave up their Saturday night to show their support at the gala fundraising dinner. Vogue editor-in-chief Edwina McCann joined Parliamentary Secretary for the Arts Michael Danby, the Seven Network’s head of drama Julia McGauran, Net-a-Porter global sales and marketing director Lisa Bridgett, Bulgari Australia marketing and external relations director Trent Power and Icon Film’s chairman Bruce Davey. And, of course, there was the stellar group of NIDA alumni, including many of those mentioned above.

Now in its seventh year, the dinner is the event in NIDA’s fundraising calendar. Despite an additional $4 million federal funding allocated to the school in 2009, NIDA is still in need of funds to maintain the quality of teaching and ensure the course remains relevant in this technology-driven age.

“The NIDA gala has been incredibly successful over the years, with over half a million dollars raised to support the students’ education,” says NIDA director and CEO Lynne Williams. This year’s event raised an impressive amount close to $100,000.

Such is the sense of camaraderie and so strong is their belief in the importance of the school’s existence that NIDA graduates often return to offer specialist expertise. “The teachers have a dedication and understanding of the various mediums: stage and more recently film. You get three years where you get to play a lot of roles, try a lot of things out and make a lot of mistakes, which is a great thing,” says Otto.

NIDA exists alongside at least three other acclaimed schools, including the West Australian Academy of Performing Arts (WAAPA), the Victorian College of the Arts (VCA) and the University of Western Sydney (UWS), which have produced the likes of Hugh Jackman, directors Andrew Dominik, Sarah Watt and Joel Edgerton.

But there is no denying NIDA graduates have a certain sense of je ne sais quoi. Graduate Nathaniel Dean says the fact that students work in all areas of the performing arts ensures they emerge well rounded. “Every day we were creating productions, working with designers and stage managers and producers. You sign in at 9am each morning and leave at 11pm having learnt to tap dance or speak with a Spanish accent. You’re constantly working and constantly being challenged.”

Known for his screen work in Walking on Water, Somersault and Bikie Wars, Dean was recently acknowledged with a Helpmann nomination for best actor for his astounding performance as William Thornhill in the STC’s stage adaptation of Kate Grenville’s The Secret River. He is about to begin filming the ABC TV miniseries Parer’s War, about the life of WWII cameraman Damien Parer, who will be played by NIDA graduate Matthew Le Nevez.

Dean points to classmates such as Toby Schmitz – whose adaptation of The Dragon is playing at The Malthouse, and who will soon appear in the STC’s production of Rosencrantz and Guildenstern are Dead with Tim Minchin – or Le Nevez (Offspring and Howzat!) and Damon Gameau (Balibo) as examples of NIDA’s successful artists.

Otto sums up NIDA’s enviable reputation in simple terms. “It’s a real honour to go there,” she says.

The 2013 NIDA Foundation Trust Gala was held in Sydney on Saturday July 20.