To assuage her fears that no one will know who they are when they arrive in Australia for So Frenchy So Chic in January, Nick Acquroff chats to French singer Nili Hadida, the front woman of Lilly Wood & The Prick, and reassures her of our love for all things French, including pop music. 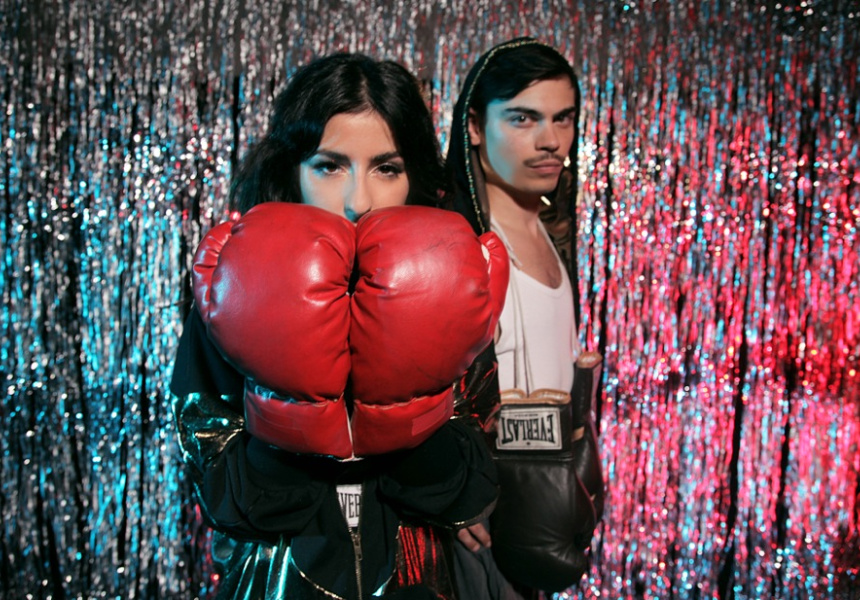 It’s 7pm when Nili Hadida’s name finally flashes up on the Skype feed. She sends a message first…”I’m sorry, I don’t know what’s going on. Are you there?” It’s an hour after we were supposed to be connected and when she does call, the conversation darts around serendipitously. Hadida, the French singer who fronts Lilly Wood & The Prick, under the Lilly Wood moniker, is a classic creative type. She loses focus constantly, multi-tasks with great esteem and just when it seems like she’s losing her mind, she puts together a thought or feeling of great value.

Born in Tel Aviv, Israel, Hadida moved between England and Paris as a child. She spent her high school years in California with her father, developing her taste for popular music and a sweet American accent. When high school finished she moved back to Paris and met French guitarist, Benjamin Cotto, outside a cafe, and together they formed Lilly Wood & The Prick, in 2006. The pair formed an insatiable bond, releasing a cover of Santigold’s L.E.S. Artistes in 2008, which according to many critics superseded the original. Their debut album, Invincible Friends, won a French Grammy (Victoires de la Musique) in 2011, and since dropping their sophomore record, The Fight, in late 2012, the pair have been on the festival tour circuit throughout Europe.

Defined by Hadida’s poetic storytelling (in English), the band combines folk, new wave, funk and electro influences, across two albums of dynamic French pop. Ahead of Lilly Wood & The Prick’s tour of Australia in January, 2014, we spoke to Hadida about movie soundtracks, production aesthetics, and the French music scene.

Nick Acquroff: Where do you live in Paris?
Nili Hadida: I’m in the 20th (Arrondissement). It’s not that close to the centre, but in Paris, it’s so small that everything is close. I don’t really like the centre of Paris, with all the trendy people. You can’t even go down and buy milk without putting your best outfit on. I’m not very social, I think. I don’t like talking…I mean, I can talk to you now, but I like to stay home.

And what are you working on?
We are working on a movie right now, me and Ben. We’re working for one of the biggest distributors for movies in France. If you go to the movies in France, you can either go to UGC or Pathe. They’re the two main distributors. Anyway it’s this big thing. It’s like this horrible romantic comedy that we’re doing the music for, but it’s funny.

The music is really cool. We decided that we should both sing together. It sounds so fucking cheesy! It’s like the cheesiest French song ever. It sounds like the '80s, [but] the director really didn’t get it…

So what did you do?
Well we haven’t done anything on it for about a month. But Ben is coming around again in about an hour to do it.

Do you think that France creates a bubble for itself, in musical terms? In that it has such a unique arts scene, that it becomes hard for you to break in the rest of the world?
I don’t really see it like that. I think every country has its own bubble. You didn’t exist and survive and be happy in your own little bubble. I think it’s harder to break into other scenes. First of all, because music is not meant to be our (France’s) main skill. You know, we make cheese and we make food. That’s what French people do. When you go to England, which we sometimes do, everyone is in a band and everyone is in a better band than you. Because that is just what they do, it’s in their culture. I think when you make it here, it means you’re not as shitty as everyone else.

Can you tell me about your music? I thought the production on your album was really cool. The way you mix acoustic instruments with electronic beats.
I have a really hard time talking about and analysing what we do. You know how people change so much all the time – like part of being a person is changing a lot, you know? And it’s really hard for me to connect with our albums. Like, our live shows are so much more us. I’m really proud of our songs. I think I’m a really good songwriter, and Ben is too. I’m not sure that I absolutely love everything we’ve ever done, but I think being two people in a band is full of compromises.

I think with this album anyway, we tried to make the production feel like it isn’t there. We wanted the album to sound like it could come out 15 years ago, or 10 years from now, and you couldn’t really tell. That was the problem we had with the first album. It didn’t age well. It is very marked by the time we made it. There was this thing in France when everyone in wanted to use keyboards.

But if you don’t look back at what you’ve done and hate it, you’re never going to improve are you?
Yeah, that’s true.

And you’re excited to come down here and visit us?
You know Australia is the farthest place that we can go. I’m really glad, because I don’t think I ever would have gone to Australia otherwise. I don’t know if anyone is going to give a shit about us, but I’m looking forward to going.

I think you’ll be surprised. We love French culture here.
Really? Cool. That’s great. Well we have a lot of love to give, so we hope there is some people there to receive it.

Lilly Wood and The Prick are performing at So Frenchy So Chic in the Park on Sunday 18 January at St John’s College, Camperdown in association with Sydney Festival.