Broadsheet sits down with one quarter of World’s End to talk old friendships, recording in isolation and Freddie Mercury’s piano. 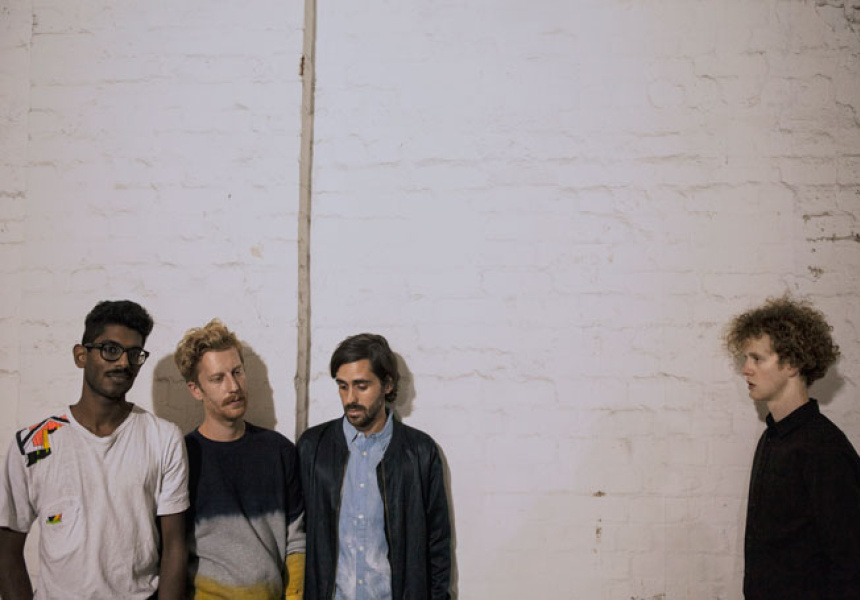 At the vanguard of Australian music’s unbridled rising youth, World’s End Press recently scored the recording gig of their dreams, having signed to Liberation Music (The Temper Trap, Husky), with a forthcoming debut self-titled album produced by Tim Goldworthy (The Rapture, Cut Copy). Staples of the Aussie music festival circuit, they’ve spent the last three years gathering fans and farming their own particular fusion of disco and rock. We chat to drummer Tom Gould about the five reasons why you should be eagerly awaiting their record drop.

1. Tim Goldsworthy produced the record.
“We sent our stuff to [Goldsworthy] and he miraculously came back and said ‘I’m really in to this, I’d love to do it’,” says Gould, still recovering from the coup. Owner of DFA Records and learned producer, Goldsworthy, he says, knows how to extract every inch of talent from his muses. “He made sure we were competent to record live and play a lot of the dance elements as a band,” explains Gould. The band recorded on analogue tape in full takes. “Rather than cutting and looping a lot of stuff to capture the live energy of what we do with live instrumentation, we wanted to use a lot of old ways of recording and old sounds to give it a warmth and a real human element…that lucid sort of feeling of a band playing live.”

2. They recorded in isolation in Wales.
For three weeks, in the middle of nowhere, World’s End Press recorded with Tim Goldsworthy at legendary Rockfield Studios in Monmouth, Wales where Queen recorded rock history with A Night at the Opera - also in total isolation. “We were staying at the studio, recording, and the town was two miles away, so we didn’t have any distractions at all … it’s where The Stone Roses recorded as well, so it was pretty hard to feel worthy,” says Gould modestly. When the band wasn’t working hard in the studio, they were forced to make their own fun, he says. “We spent a lot of time pelting rocks at a bucket placed in the middle of a car park.”

3. Freddie Mercury lent them his piano.
Imagine recording your first work on the same ground graced by rock history’s greatest fathers. Then imagine being handed the very same piano on which Freddie Mercury wrote Bohemian Rhapsody. “It was really surreal,” reflects a starry-eyed Gould. “It made us feel like we needed to make a real proper record…we tried to do something that’s in the same light of all those legends. We feel really lucky”.

4. A 10-minute tequila-fuelled closer.
Vanguard 1 is the final track on the album, a beautiful and entrancing 10-minute draw-out featuring Mercury’s keys. “It represents one of our late night jams,” says Gould, adding “I think there was a fair bit of tequila involved.” “It sums up our experience at Rockfield – we were doing a lot of jamming stuff out and playing with instruments, ideas and what Tim wanted to do too. We really felt like it represented what we were doing for three weeks, and so we just wanted to make sure it was on there, really.”

5. They know a thing or two about coffee.
“I used to make John [Parkinson] coffee at ACCA [Australian Centre for Contemporary Art in Melbourne],” reveals Gould, “so that’s a pretty weird connection … I guess that’s very Melbourne, actually.” Despite the band’s looming growth on an international scale, all four are Melbourne-born, raised and proud. “It’s such a great place to be, and we feel really comfortable here. We’ve got a good studio and good people around, so it’s likely that we will be staying here.”