Perfecting a foreign accent for the stage takes time, preparation and an exceptional instructor. Sydney Theatre Company’s voice and text coach Charmian Gradwell has worked with the likes of Cate Blanchett, Hugo Weaving and Richard Roxburgh to help tune their voices into vocals not easily forgotten. 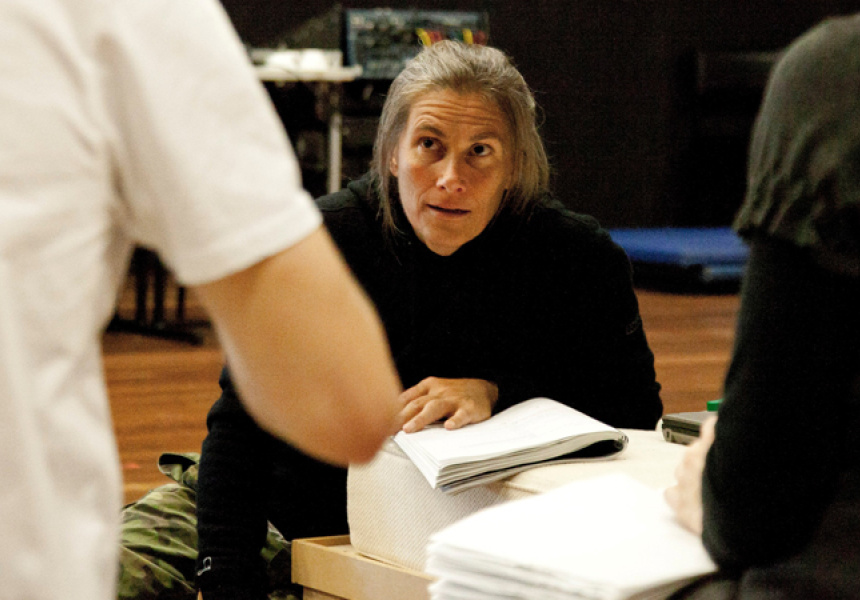 On any given day, Charmian Gradwell might be helping Mad Max’s Bruce Spence learn to bark like a dog, exploring with the nuances of Tennessee Williams’s Mississippi drawl with Cate Blanchett or chewing over the relevance of George Bernard Shaw’s 1890s England to 2013 Sydney.

As the Sydney Theatre Company’s voice and text coach, Gradwell would be a fun person to have at a party. Like a pianist who can skilfully turn their hand to any genre or artist (be it Rachmaninoff, Elton John or Metallica) you could shut your eyes and feel far, far away as Gradwell entertains you with her world tour of accents – first to Northern Ireland, then down into the south, onto the US west coast and over to Liverpool – slipping effortlessly between them all.

Her own accent is British, flattened a little by her years living in Australia. Gradwell’s life story is as diverse as the accents she delivers. Five years ago, she moved to Australia to join the STC at the invitation of then-incoming artistic directors Andrew Upton and Blanchett (Upton is now the company’s sole AD). She is Australia’s only voice and text coach attached to a theatre company, and her role is broad, from working with the director to explore a playwright’s intent and helping the cast master a particular accent and comprehend the nuance and intent behind the text, to protecting the actors’ voices from injury or illness.

The daughter of a voice coach, Gradwell trained at the Bristol Old Vic Theatre School and was actor with the acclaimed Royal Shakespeare Company in Stratford-upon-Avon for two decades, performing on the West End and also making regular appearances on television shows such as Howard’s Way and The Adventure Game.

Her career took a sudden U-turn when she was performing in a Peter Hall play and tore her anterior cruciate ligament, leaving her unable to walk. After an extensive recovery period and a time spent focusing on rowing – another great love of hers – Gradwell responded to an ad for volunteer drama and voice specialists in Nigeria, helping women and children find self-empowerment through theatre. “Sometimes it was a wonderful experience, at other times it was completely horrifying,” she says. “You’re in a place where someone could be murdered for body parts – and I came across that – and at other times there was real richness.”

At the end of her placement, Gradwell realised her heart lay in the creative process, so she turned her back on her acting career and retrained as a voice and text coach. When the STC’s offer came along, it seemed too good to refuse.

Gradwell’s role as both voice and text coach means she works on all STC productions. Rather than simply taking actors through a phonetic breakdown of a script requiring accents, Gradwell uses real stories with real voices, relying on sound files emailed from fellow voice coaches and DVDs, so the actors can listen and watch. She starts with the placement of sounds: “A No’rn Irish would be right back in de troat like that, whereas a s’rn Irish has similar sounds but is in front of the face,” she says, switching seamlessly between the two. “Then you have the melody or the dance of a dialect. If you get the melody wrong you’re not going to sound right, whatever you do.” If an actor is struggling with an accent, she’ll give them practise sentences: “Tom’s dog Oscar” helps refine the North American ‘r’. “You just drill them until the mouth is in the right position so you get a proprioception of the mouth and the muscular memory can [kick in].”

In Mrs Warren’s Profession (now playing in Sydney), lead actress Helen Thomson must move between the upper-crust British accent her title character has perfected to conceal her poor roots and profession as a brothel madam, and her original downtrodden London accent that emerges when she reveals her secret to her horrified daughter.

Gradwell has just begun work on Fury, a new play by Melbourne playwright Joanna Murray-Smith about a smug, successful inner city couple whose veneer crumbles when their son is accused of an inflammable act. No accents are required but Gradwell has been relishing the opportunity to work alongside the playwright. “It was a joy and a privilege to be able to discuss things about the language and psychological choice. Joanna is very particular about her punctuation and when you know exactly what [the playwright] means by their quirky punctuation, it’s much easier to help the actors mark those breath rhythms.”

One of Gradwell’s most nerve-wracking experiences was taking Tennessee Williams’s A Streetcar Named Desire, starring Blanchett and Joel Edgerton, to America. “It was terrifying,” she says. “We’re taking a seminal play back to them with an Australian cast and a Swedish director. [The southern accents] had to be right. They loved it. And they got the nuance of the dialect.” It doesn’t get more satisfying than that.

Mrs Warren’s Profession plays at Wharf 1 until April 6, then re-opens on July 4.