New online shop Significant Others combines the logic and aesthetics of graphic design with the tactility of handcrafts, culminating in a beautiful collection of pieces for the home. 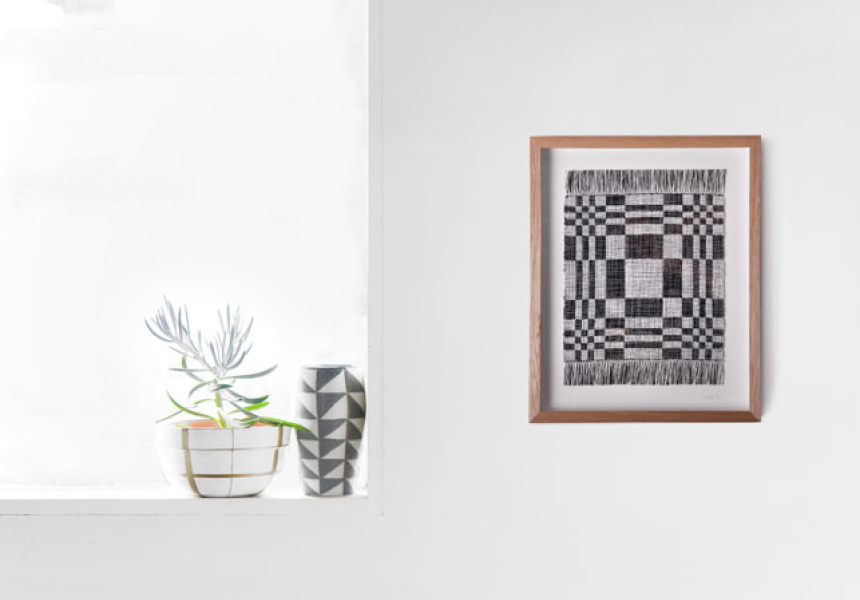 It’s a rarity to catch a glimpse into the processes behind slow crafts in a world that increasingly champions the mass-produced. The notion of making, cherishing and passing down objects may be foreign to some, but it’s a mantra that rings true at Significant Others.

Long time friends and collaborators Ryan Ward and Suzy Tuxen always knew that they “didn’t want to stick to one discipline”. Rather, they wanted to take their experience in the graphic design field and put it to good use – fusing their design training with the process of making objects by hand.

Drawing from Ward’s experience in working with timber, the pair began to reconsider the notion of the canvas or medium. “Typically as designers, we are used to working on paper, so we wanted to try a different substrate, in using timber,” explains Ward, uncovering some of their eye-catching examples.

In their reclaimed timber and plywood series, the material is lovingly treated and then printed with abstracted yet oddly familiar alphanumeric forms. “It gives it a permanence,” adds Tuxen, in reference to their choice of material. “These are pieces that we hope people will have in their homes for a very long time.”

The antithesis to the modern impulse to accumulate disposable objects, the notion of the heirloom is one that Significant Others is striving to revive. “A lot of work goes into the pieces, so we feel that they’re pieces that would be handed down,” says Ward. This sentiment rings true for their Heirloom Toy Series – timber toys lovingly made by Ward’s father Roger, a talented timber craftsman himself. Each piece is put together using timber off-cuts and remnants from the younger Ward’s timber framing workshop.

From planes and trains to automobiles, these toys spark a sense of nostalgia in even the biggest of kids. “We’ve had interest from a lot of adults too, who have purchased a toy as a gift but then can’t quite bring themselves to giving it away!” says Ward. Their Aussie Muscle Car has been a particular favourite: “We wanted to create a toy you wouldn’t normally see, and really celebrate Australian culture and icons.”

The toys are tactile pieces, from the warmth of the timber to the smoothness of the hand-sculpted curves, they would look at home in play room and upon desktop alike.

From one traditional crafting technique to another, Significant Others’ intriguing repertoire also includes the art of weaving. Tuxen’s friend and weaving artist Carla Grbac has worked with the team to produce Hand Woven Editions for the online shop. “We’ve always admired Carla’s work,” smiles Tuxen, “so we worked with her to come up with quite contemporary pieces through this very traditional craft.”

Bending the rules of tradition, the Embroidered Timber Editions set up a curious game of contrasts. Ward prepares a beautifully honed and treated timber base, which is then treated as a fabric to Tuxen’s embroidery needle. “There is an inherent graphic quality to the timber, a natural and organic figuring that is a contrast to the quite geometric (embroidered) shapes,” explains Tuxen. As a fusion of 2D graphic meets 3D form, the pieces are a real embodiment of the cross-disciplinary venture that Significant Others has embarked upon.

“For us, the end result isn’t the main thing – it’s the process that’s really the key,” says Ward. And with family and friends having such a strong involvement in the project, it’s not hard to see why. As well as the plethora of images that depict each piece, as photographed by Tuxen’s husband Shane, Significant Others have also provided a visual insight into their craft through photographs that track the process of making. For Tuxen, it’s “ quite a personal experience” and one that most certainly shines through when viewing, holding and cherishing these significant pieces.