Projecting onto pylons on the Sydney Harbour Bridge, mountains at Rainbow Serpent, storefronts, and most recently, Melbourne’s State Library for White Night, light artist Nick Azidis is turning his magical light show on to some of our most conspicuous architecture. 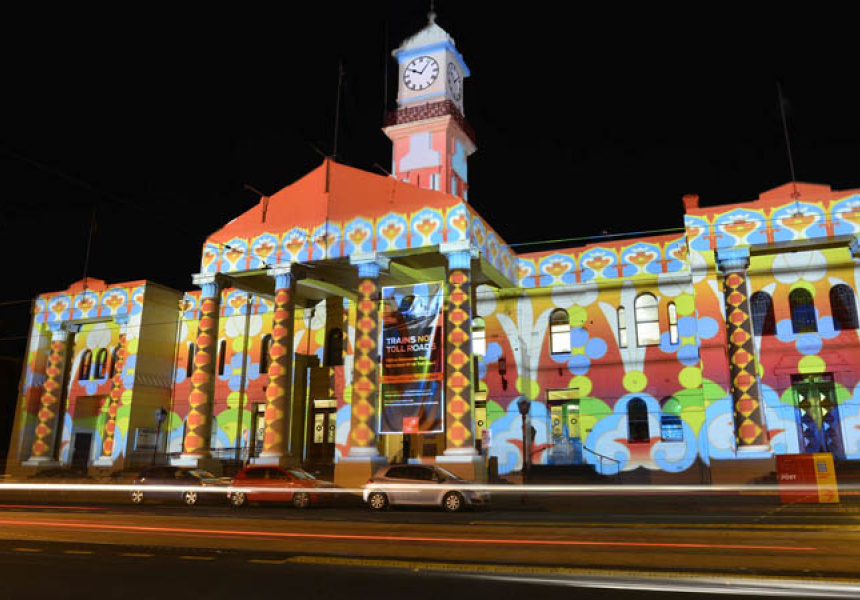 Light projection artist Nick Azidis (known as Projection Teknik) works in an enormous warehouse in South Melbourne – his office way up top in a space not unlike a castle’s turret. A small rack punctuates one of the space’s white walls. It’s lined with slides ranging from a few inches to several inches square, each depicting patterns in a spectrum of colours. It’s hard to imagine how these tiny, concentrated fragments of art can result in the kind of sweepingly astonishing works which Azidis has projected onto the Sydney Harbour Bridge pylons for World Aids Day, the opening of Skoda Stadium in Sydney, mountains at the Rainbow Serpent Festival in regional Victoria, storefronts at Melbourne’s Gertrude Street Festival, and, more recently, one of Melbourne’s most iconic building (specifically The State Library) for White Night.

Some projections are so precise that they match small cornices or the curvature of eaves, and explicit measurements must be taken to ensure things align. “We use a camera obscura to photograph and map the site and make a mask template,” Azidis explains. “The camera obscura is like a pinhole camera, so I’ll use the projector objectively on the camera obscura and set that up exactly where the projector is going to be placed for that site, then scale that down to template size.”

Through his partnership with lauded Austrian projector company PANI, Azidis now uses some of the best equipment available to artists today. “Their projectors are made really for artists to use,” he says. “I’m in a unique sort of position because I’ve been doing this for 21 years now, and [PANI] felt comfortable with me [representing] their brand.” Azidis uses the PANI BP 12K regularly, which has a 100,000-lumen output capability as opposed to the usual high-powered video projector, which often only has 20,000-lumen output. “We’re using that one [the BP 12K) this Easter for Bruce Springsteen, and projecting on to Hanging Rock,” he enthuses.

For a large-scale projection, the first things Azidis needs to be aware of are the distance of the projector from the building or structure’s facade and any ambient or surrounding light that may interfere with the projector’s beam. “You can also do little tricks where you can really play with the content and make it brighter,” he says. “You’re creating your artwork that has high contrast, because we’re dealing with film, and light’s passing through that film. The more light going through that film, the brighter it’ll be, so if you’re using quite chunky, bold artwork it seems to deliver more of a punch as opposed to using thin lines and dark colours. So you can really push the projector.”

Azidis’ Greek heritage is often referred to, but the artist says this doesn’t influence his art any more than other cultures do. “It’s all multi-sort-of-cultural, all the influences of design,” he says. “Aboriginal design, Italian tiles…I was heavily influenced by Japanese motifs and stencils.” All the same, he is making work for the Antipodes Festival in Melbourne’s Greek precinct, projecting onto the buildings of Lonsdale Street on March 16 and 17.

Of all the buildings, Nick Azidis would love to project light onto the Shrine of Remembrance. He concedes it would be “a sensitive undertaking”, but the Melbourne-born artist has proven his ability to create conscious and responsive works using some of our most conspicuous architecture.

The transformation of such everyday surroundings we might otherwise take for granted is the crux of Azidis’s art. His mesmerising towers of colour, shape and gesture have the wonderful ability to surprise and awaken.